The Mont Pelerin Society in the Galapagos

The Mont Pelerin Society was founded in 1947 by Friedrich Hayek as an organization for promoting classical liberal thought.  For a long time, it seemed to be defending a lost cause.  But by the 1970s, many of its members became prominent in an apparent revival of classical liberalism.  The awarding of the Nobel Prize in Economics to Hayek in 1974 and to Milton Friedman in 1976 was one indication of this.  The collapse of the Marxist socialist regimes in 1989 was said by some commentators to be a vindication of Hayek's argument that socialism must fail.

Although the MPS has been dominated by economists, Hayek had always wanted this organization to be a meeting place for people from many intellectual disciplines, because he thought the argument for a free society was not just economic, but also moral and political.  Moreover, Hayek himself saw the free society as the product of spontaneous evolution, and he embraced an evolutionary view of social order that applied biological reasoning to social thought.  In recent years, many classical liberal thinkers have applied new ideas from sociobiology and evolutionary psychology in explaining the spontaneous order of a free society as conforming to evolved human nature.

It is understandable, therefore, that the MPS held a special week-long meeting (June 23-28) on "Evolution, the Human Sciences, and Liberty" in the Galapagos Islands, with the sponsorship of the Universidad San Francisco de Quito (USFQ).  The meeting was held at the branch campus of the University in the Galapagos, in Puerto Baquerizo Moreno on the island of San Cristobal.  Most of the lectures and discussions were at the Charles Darwin Convention Center in the city.

I will be commenting on all the lectures in a series of posts.  Copies of most of the lectures can be found on the MPS website.

June 23
The conference opened at the Charles Darwin Convention Center with a greeting from the Mayor of Puerto Baquerizo Moreno, which is the provincial capital of the Galapagos.

I was impressed by the large mural painting (signed by David Basantes) that covers the entire back wall of the stage of the Convention Center.  It's clearly a depiction of God's creation of the Galapagos.  On the extreme right end of the painting, one sees what looks like the wreck of Noah's Ark, with a Galapagos iguana falling out of it.  On the left and middle part of the painting, there are two giant hands breaking through the sky.  One hand is clinching a line that is pulling up a fish.  The other hand is delivering bags full of Galapagos animals.  A blue-footed booby has walked out of it, and a giant tortoise is tearing his way out of the bag.  Near the middle, there is a vague outline of two naked human figures emerging out of a cloud formation, suggesting the creation of human beings.  Next to the human figures is an erupting volcano, perhaps suggesting that God can use natural processes for his creative purposes. 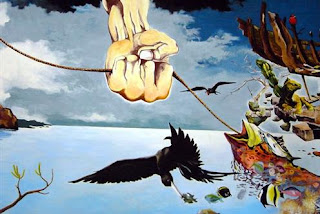 I was surprised that none of the speakers mentioned this painting.  When I lectured two days later, I drew attention to it as suggesting the question of whether Darwinian evolution could be compatible with the Creation story of the Bible.

Carlos Montufar of USFQ spoke about the remarkable history of the University.  It was founded in 1988 as the first private university devoted to a liberal arts education in South America.  And it is now regarded as one of the very best universities in all of Latin America.  Its campus on San Cristobal is the location for its Galapagos Institute for the Arts and Sciences, which has hosted three major conferences on evolution in 2005, 2009, and 2013.

Deepak Lal of UCLA, a former President of the Mont Pelerin Society, gave the welcoming address for the beginning of the conference.  He spoke about Hayek's vision of the MPS as a scholarly society dedicated to a free society of liberalism, but without being propagandistic.  Hayek rejected the common separation between the natural sciences and the social sciences, and he pursued a life-long interest in social evolution.  He wanted the MPS to be an interdisciplinary academy that would not be narrowly economic.  Lal saw this as providing the justification for this MPS conference.

The first lecture of the conference was by David Kohn, speaking on "The Scottish Enlightenment, Malthus, and Darwin's Theory of Evolution."  (Remarkably, Kohn delivered his lecture by telephone, because he had fallen and injured himself earlier in the day.)

Kohn is a professor emeritus of the history of science at Drew University.  He has been an editor with the Darwin Correspondence Project at Cambridge University, and he was a co-editor of Charles Darwin's Notebooks, 1836-1842 (Cornell University Press, 1987).

In recent years, Kohn has been studying the influence of John Henslow's botany on Darwin, and some of this work was published in his fascinating article "What Henslow Taught Darwin" in Nature, 436 (4 August, 2005): 643-45.  Although Henslow accepted the creationist idea that species can vary only within limits, he emphasized variation in a way that prepared Darwin's mind to see how difficult it was to distinguish varieties and species.  As one might expect, then, Kohn's lecture stressed the importance of Darwin's botanical studies in the Galapagos in showing variation across the islands.

Kohn gave the audience a meticulous examination of how Darwin's notebooks show his slow steps towards his theory of evolution after his return to England.  Kohn emphasized the influence on Darwin of the idea of an "economy of nature," which came from the application of economic thinking to the history of life.  For example, from Henri Milne Edwards, Darwin learned that the division of labor could be seen as a major law of the economy of nature.

Later in the week, Leda Cosmides suggested another connection between economics and evolution.  She observed that one good way to teach school children the idea of Hayekian markets as spontaneous orders would be to connect this to what they might have learned about protecting ecosystems from human interference: markets as spontaneous ecosystems need to be protected from the disruption of governmental attempts at planning.  Indeed, one might think here of how the very ideas of "ecology" and "ecosystems" borrow from economics.

Kohn traced the evidence for the influence of Thomas Malthus on Darwin's development of his theory of evolution.  As I have indicated in a previous post ("James Mackintosh & Darwin's Evolutionary Theory of Morality," June 6), I agree with this, and yet given the topic for this MPS conference--human social evolution--I think Kohn should have given more attention to the influence on Darwin of James Mackintosh as a moral and political philosopher.  Mackintosh was to Darwin's theory of moral evolution what Malthus was to Darwin's theory of organic evolution.

This remains true today.  Many people who accept Darwin's general theory of evolution in The Origin of Species are reluctant to accept his theory of human social evolution in The Descent of Man.  One could see this at the MPS conference.  I could not detect among the speakers or the audience any resistance to the idea of organic evolution.  But I could detect some uneasiness about the idea of human social evolution.  In fact, as I indicated in my lecture, even many proponents of evolutionary psychology today assume a fact/value dichotomy in which human morality is understood as transcending evolutionary science.