An Evolutionary Tour of the Galapagos (5): Sibilicide Among the Boobies

June 20
Overnight, the Cormorant navigated to Marchena, which is one of the most isolated islands and one rarely visited by tour boats.

We hiked over Black Beach.  The beach is black because it's composed of volcanic ash.  The large pieces of driftwood on the beach that have floated in from hundreds of miles away suggest how the islands could have been originally settled by animals floating on wood from the South American mainland.

Reptiles could have survived such a long trip without water better than mammals, which could explain why there are no large land mammals on the Galapagos, and why the reptiles are dominant.

There are marine iguanas here, as there are on all the main islands.  They are the only marine lizards in the world.  They live largely on land, but they feed almost entirely on red and green algae.  They can remain submerged for over 10 minutes. 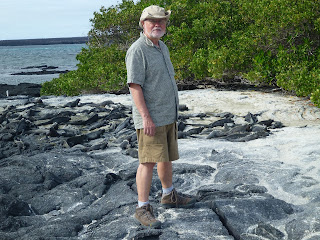 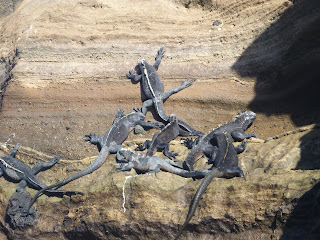 On Marchena, there are no land iguanas or tortoises, which feed on cacti.  Consequently, as Carlos pointed out to us, the species of cactus on this island grows low to the ground, because it does not need a high stalk to protect itself from iguanas and tortoises eating it.  Opuntia helleri is a low-growing species that grows only in Marchena and other northern islands that have never had a tortoise or land iguana population. 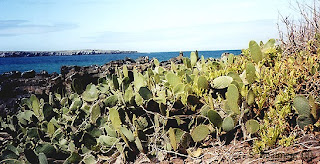 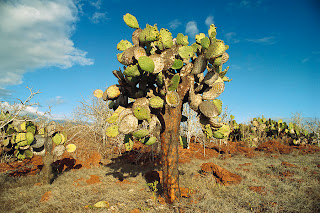 
June 21
Having navigated overnight to the island of Genovesa, the Cormorant anchored in Darwin Bay, which is an almost perfectly circular bay created when a crater collapsed into the sea. 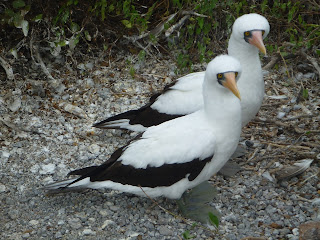 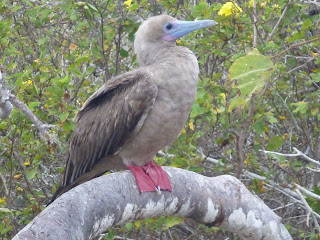 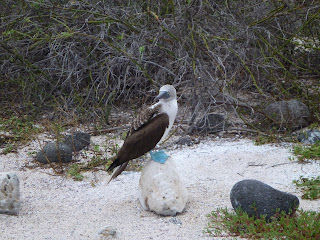 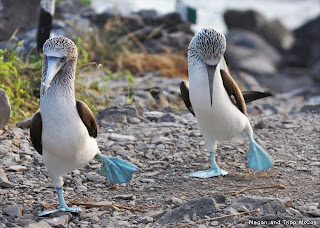 Mating Dance of the Blue-Footed Boobies

Although he did not use the terms, Carlos often appealed to what Darwinian biologists call "competitive exclusion" and "niche differentiation."  Where similar species compete for the same food resources, either one will drive out the other, or they will coexist when the species differentiate their niches so that resources are divided between them.  The boobies can coexist and avoid competing for fish by fishing in different spots and thus carving out distinct niches.  So while natural selection is driven by competition between species, natural selection can also favor species finding ways to avoid directly competing with one another for scarce resources.

Despite their clownish appearance, the reproductive and parenting strategies of the boobies are deadly serious.  As Carlos explained to us, the supply of food determines how many offspring they can rear.  Blue-footed boobies lay up to three eggs that are incubated by both parents for up to 42 days.  If the food supply runs short, the young can eat their siblings.  Nazca boobies can lay up to two eggs, but they cannot rear more than one offspring.  Laying two eggs seems to be insurance if one of the eggs is bad.  If both eggs hatch, one sibling will kill the other.  Biological studies have shown that the killers tend to be innately more aggressive, with higher levels of testosterone.  Oddly, those young that are born without siblings have been observed attacking the young of other birds, as though their instinct for sibilicide needs to be satisfied.  Some pictures of Nazca booby sibilicide can be found here.

Some of the people in my tour group had spoken previously about how "cute" the boobies were, but then they were disturbed by these Darwinian explanations about their need for siblicide and cannibalism as reproductive strategies.  This illustrates the point that Darwin made in his debate with Frances Cobbe--that evolutionary science reveals a world that is without moral design, and thus there is no cosmic grounding for right and wrong.  Those with Platonic longings for a moral cosmology conclude from this that Darwinism is nihilism, because they cannot accept the moral anthropology of Darwinian science--that human morality arises from evolved human nature without any cosmic normativity to support it.  Here is where Darwinian science continues the tradition of Lucretian liberalism as revived by David Hume and Adam Smith, which forces us to consider the possibility that Friedrich Nietzsche was right in claiming that we could properly "describe the entire phenomenon of morality as animal."

Some posts on related themes can be found here and here.
Posted by Larry Arnhart at Wednesday, July 10, 2013