An Evolutionary Tour of the Galapagos (3): Flightless Cormorants and Creationism

June 17
Overnight, the Cormorant navigated to Punta Moreno, an area on the southwestern coast of Isabella.  After hiking there in the morning, we sailed farther north to Elizabeth Bay on Isabella.

The Galapagos penguins are unique to the islands.  It's remarkable to see a species of penguins at the Equator! 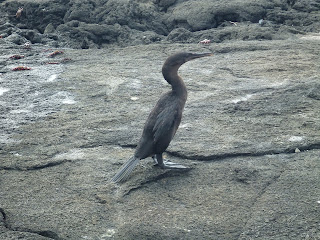 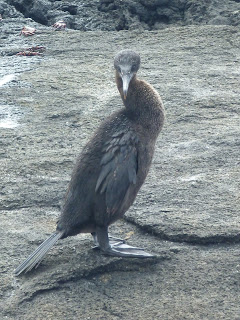 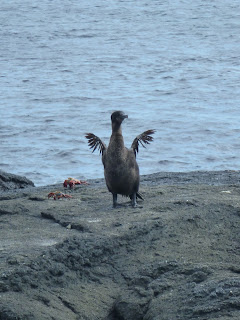 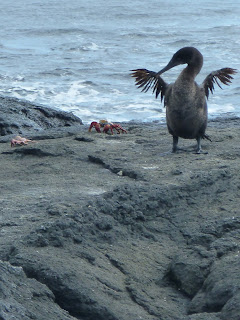 Like all cormorants, the Galapagos cormorants dive deep in the sea for fish, eels, and octopus.  But unlike all other cormorant species, the Galapagos cormorants have wings that they cannot use for flying.  Notice how puny their wings are and how they have to spend long periods drying their wings.  Why would God or the Intelligent Designer create birds with wings that serve no purpose?  Doesn't this look like unintelligent design?

The evolutionary explanation is that when the flying cormorants came to the Galapagos, they found themselves in an environment in which they were not threatened by any major predators that would make flying advantageous for them.  Consequently, natural selection might favor those birds with wings that were not well adapted for flying, and eventually the whole species would become flightless.  This would be an example of the evolution of a new species, in which organs that once had a purpose evolve into vestigial organs with no purpose.

So how would the creationists explain this?  Some would say that God simply chose to create flightless cormorants in the Galapagos and nowhere else for His own inscrutable reasons.  But this is not very satisfying as an explanation, particularly if there is no explanation as to exactly where, when, how, and why the Creator did this.  These creationists accept the idea of change within species (microevolution) but deny the idea of changing from one species to another (macroevolution).

And yet some creationists accept the evidence for the emergence by natural selection of new species--like the flightless cormorant.  But then they argue that this actually supports creationism and not Darwinism.  According to the first chapter of Genesis, God created all living beings "after their kind" (in the King James translation).  But what is a "kind"?  In Darwin's time, many creationists interpreted "kind" to mean "species" in the modern sense of Linnean taxonomy.  If so, then the natural evolution of new species would contradict the creationist belief in the special creation of each species by God.  But now some creationists--like those represented by "Creation Ministries International" and "Answers in Genesis"-- argue that Biblical "kinds" are general groups of similar animals that correspond to higher levels of taxonomy above the species level.  So, for example, one "kind" of animal might be the "family" of canids, which includes different species--foxes, wolves, dogs, jackals, and coyotes.  Part of the reasoning here is that Noah's Ark was not large enough to include two of each species, but it could have been large enough to include two of each "kind."  Then, each "kind" could diversify by mutation and natural selection into many new species.

As you can see in the link to "Creation Ministries International," these creationists insist: "It can hardly be over-emphasized: natural selection is not evolution; indeed, natural selection was discovered by creationists before Darwin, and is now an important part of the biblical creation model."  Their argument is that adaptation and natural selection occur when genes are removed from a population.  But this is not Darwinian evolution, which would require new genetic information, which can only come by God's creative activity.

Consequently, these creationists have expanded the notion of "microevolution" to include the evolution of new species, which they affirm as compatible with the Biblical story of God's creation of "kinds."  But they deny that there has been any Darwinian "macroevolution," understood as evolutionary change from one kind to another kind.

Aren't these creationists conceding a lot to Darwinian evolution by conceding that there has been a natural evolutionary emergence of new species without God's miraculous intervention?

Some of the intelligent design proponents go even further in their concessions to Darwinian evolution.  For example, Michael Behe--the leading proponent of intelligent design theory among biologists--accepts as scientific fact that human beings evolved from ancient primate ancestors.
Posted by Larry Arnhart at Tuesday, July 09, 2013

Intelligent Design is just an offshoot of Trotskyite Marxism:

In a way, I see where their doubts are coming from. How new "kinds" appear? How does macroevolution work? Have random mutations been occurring with the same frequency throughout the last 500 million years? Have there been periods where random mutations are more (or less) frequent? If so, what causes an increase (or decrease) in random mutations? Can microevolutions over long periods of time really account for speciation (aka macroevolution)?

Wow. I had never known such creationists exist. But maybe it's the only way to harmonize: