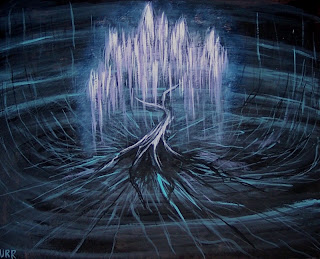 The Tree of Souls in the Film Avatar 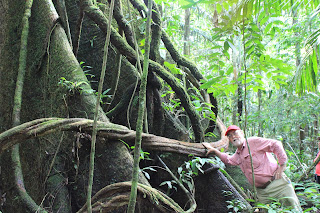 A Kapok Tree in the Sacha Lodge Reserve 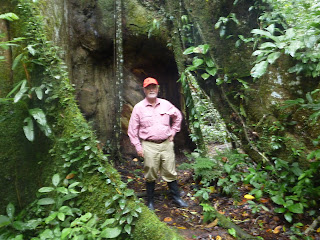 When my wife and I travelled recently to the Sacha Lodge reserve in the Ecuadorian rainforest, we saw this kapok tree on one of our hikes.  This tree is over 160 feet tall. Our naturalist guide identified this as the "Avatar tree"--the Tree of Souls that is connected to the mother goddess Eywa worshipped by the Na'vi tribe of Pandora, a lushly forested moon of a gas giant in the Alpha Centauri star system in the mid-22nd century.  James Cameron's 2009 film is an environmentalist statement on how the sacred order of nature is threatened by human beings who destroy nature through their brutal extraction of natural resources.  Our guide at Sacha Lodge often reinforced this lesson during our hikes--telling us that while the indigenous people of the Ecuadorian rainforest have a religious respect for nature, the oil companies extracting oil from the rainforest are destroying the sacred balance of nature.

And yet this same guide explained the forest and everything in it as a product of Darwinian evolution.  Every plant and animal was explained as shaped by an evolutionary process of competition for survival and reproduction.  For example, we saw kapok trees being covered by "strangler" fig trees.  Trees in the rainforest compete for sunlight by expending great energy in growing tall to reach the sunlight in the high forest canopy.  Some species of fig trees have evolved an exploitative strategy by which they grow around tall kapok trees to reach the canopy, and eventually they will kill the kapok trees that they have exploited.

This made me wonder:  if the "Avatar tree" is part of the sacred balance of nature, why would the mother goddess allow it to be killed by a strangler fig tree? 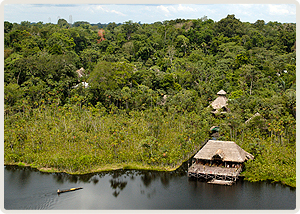 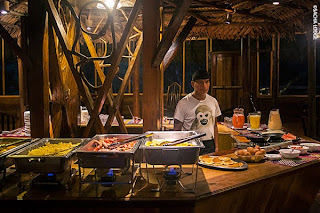 Throughout my trip to spots in Peru and Ecuador, as I talked with guides and fellow ecotourists and read various guide books, I noticed repeatedly a remarkable contradiction between the reliance on Darwinian science and the appeal to a religious cosmology of ecocentric environmentalism.  The idea of a "balance of nature" that is threatened by human interference implies some kind of cosmic design or sacred order that is morally superior to human desires.  But from a Darwinian point of view, there is no fixed balance of nature, but rather a perpetual flux in an evolutionary process of life and death that shows no cosmic design.  Far from being in balance, evolving nature is perpetually out of balance.  (See John Kricher, The Balance of Nature: Ecology's Enduring Myth [Princeton University Press, 2009.)

As I indicated in my lecture on "The Evolution of Darwinian Liberalism" at the Mont Pelerin Society conference in the Galapagos Islands, there is a fundamental contradiction between the traditional Platonic and religious conception of a moral cosmology and the Darwinian conception of a moral anthropology.  A moral cosmology assumes that moral order is ultimately cosmic in conforming to some cosmic moral order--a cosmic God, a cosmic Nature, or a cosmic Reason.  A moral anthropology assumes that moral order is ultimately relative to each species, and thus our human morality expresses our human desires that do not necessarily have any cosmic normativity.

Darwin showed the moral anthropology of his evolutionary science in his debate with Frances Cobbe, who was shocked by Darwin's claim that the "moral sense" would be different for each species that might evolve a capacity for morality.  Against this Darwinian claim that human morality is necessarily anthropocentric, the environmentalist conception of a balance of nature assumes an ecocentric morality of cosmic design.

The ecotourism that I saw in South America manifests a Darwinian liberalism, but it also shows a cosmological environmentalism that is neither Darwinian nor liberal.  Most ecotourists come from Western Europe, North America, and Australia.  Most of them are Darwinian liberals--Darwinian in that they assume that evolutionary science can explain the origins and purposes of all living beings, liberal in that they assume that all human beings should be free in their moral and cultural choices as long as they do not initiate coercive violence against others.  Darwinian liberal ecotourists take pleasure in exploring the natural and cultural variety of the world in ways that satisfy their bourgeois desires for comfort and security.

Sacha Lodge hires a private security agency to patrol its land to protect the tourists from any human threat.  It also provides plenty of good food and drinks and luxurious cabins that are regularly sprayed with insect repellent.  The trails and creeks at Sacha Lodge are carefully maintained by the staff workers who build boardwalks and use chainsaws to cut up fallen trees and brush that would impede the tourists hiking through the forest.  The electricity comes from generators powered by fuel from the oil companies.  Some of the guides are members of indigenous tribes who explain the cultural traditions of their people.  And, of course, all of this is supported by the willingness of the tourists to pay for it.

Rainforests should be preserved, but not because they belong to some sacred order of the cosmos.  They should be preserved to satisfy human desires, including the aesthetic and intellectual desires of ecotourists like me who enjoy seeing and understanding the extraordinary biodiversity found in rainforests.  In fact, one reason that I went to Sacha Lodge was because it is across the Napo river from the Yasuni region of Ecuador, which is reputed to have more species of plants and animals than anywhere else on Earth of comparable size.  I would be saddened, therefore, if the extraction of oil from that region resulted in the destruction of the rainforest.

But to express moral disgust with the human "interference" with wild nature, as many of my fellow ecotourists do, is incoherent and unsupported by Darwinian science.  The ecotourism that one sees in the Sacha Lodge reserve and elsewhere in South America is a display of what some biologists call human niche construction.  In some manner, most plants and animals construct the niches that they occupy to satisfy their needs.  For example, in the rainforest, one sees many huge termite nests in the trees.  These nests are built by the termites as architectural constructions that become part of the niche to which they are adapted.  Similarly, human beings construct places like Sacha Lodge as niches in which we can satisfy our natural desires for comfortable self-preservation, aesthetic beauty, and intellectual understanding.  If the good is the desirable, then the human good is relative to the evolved natural desires of the human species.

But many ecotourists are not satisfied with this Darwinian view of morality as rooted in human evolution, because they yearn for a cosmic morality expressed as a religious environmentalism that invests cosmic nature with a sacred value.  For example, some of the ecotourists visiting Quito, Ecuador, are attracted to the Casa del Alabado Museum in the Old Town area of Quito, which is a museum of Precolumbian art.  In explaining the meaning of this art of the indigenous people of South America prior to the European invasion, the museum guidebook claims that "the religious thinking of these peoples, developed by wise men and women in the past" shows their "ancient, sophisticated, dynamic and impressive philosophy" (21).   The guidebook transforms the Amerindian moral cosmology into an environmentalist moral cosmology.  It explains: "In the past, our world was understood as an ecological system in which the flow of energy supported all life and where all the elements, living or not, intercommunicated.  It was always necessary to resort to the primordial world, in order to ensure the flow of vital energy" (34).  It observes: "Humans have developed many rituals that fostered communication between three parallel worlds: the world above, or celestial realm, the world beneath or the underworld, and our world in the middle.  These rituals perpetuated the flow of vital energy, the dynamic balance of nature and the renewal of life" (57).  By implication, the religious cosmology of these "wise men and women" is endorsed because it rightly respected the flow of energy through the "balance of nature."  It seems that the Amerindians were like the Na'vi of Avatar in their cosmic religion of environmental reverence for nature.

One has to read this museum guidebook carefully to notice a few references to the Amerindian practice of human sacrifice as one of the rituals necessary for maintaining the flow of energy in the balance of nature.  One can also notice that these rituals were carefully managed to sanctify the rule of elites over their subordinates.

Shouldn't a Darwinian liberal ecotourist ponder the question of whether the falsity of the Amerindian moral cosmology promoted the immorality of human sacrifice and exploitative elite rule?
Posted by Larry Arnhart at Sunday, July 07, 2013

Liberals only see what they want to see; they only take one the aspect that they like about a tribe or indigenous people. Instead one should look at the bigger picture, all aspects of a culture; the culture as a whole.