An Evolutionary Tour of the Galapagos (2): Invasive Species and Anthropocentric Morality

June 16
After an overnight navigation to the island of Isabella, the Cormorant was anchored at Puerto Villami, the only permanent settlement on the island.  Although it is the largest of the Gallapagos Islands, Isabella is inhospitable to human settlement, because it has the ruggedness of one of the newer islands shaped by geologically recent volcanic activity.  The Sierra Negra volcano erupted as recently as 2005, and it has the largest caldera in the Galapagos. 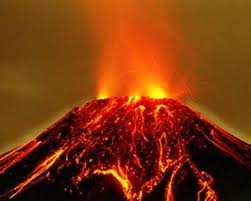 Eruption of the Sierra Negra Volcano in 2005

Isabella is one of the four islands visited by Darwin, who went from San Cristobal (Chatham) to Floreana (Charles) to Isabella (Albermarle) to Santiago (James).

The geological history of the Galapagos Islands has made them a natural laboratory for the study of evolution.  The islands lie about 600 miles from the mainland coast of Ecuador.  The geological science of plate tectonics allows us to see that the islands lie at the meeting point of two submarine ridges--the Carnegie Ridge and the Cocos Ridge.  This meeting point of the two ridges is known as the Galapagos Hot Spot because of its volcanic activity.  The islands lie at the northern edge of the Nazca Plate, which is moving eastward at a rate of 2 cm per year.  This movement is responsible for the building of the Andes mountain range--the longest mountain range in the world--and for the volcanic and earthquake activity through the western edge of South America.  As the plate moves eastward, while the Hot Spot remains stationary, a series of volcanic islands are formed, and thus the western islands are newer than the eastern islands.  The older islands in the east--like San Cristobal--have a longer history of erosion, which produces more vegetation and makes them more hospitable to human settlement.  The newer islands in the west--like Isabella and Fernandina--are largely uninhabitable because of rugged lava landscapes.

Carlos told us a story of the Ecuadorian special forces military unit that decided to use one of the most rugged areas of lava for their training.  They planned to march across it in a few days.  But their boots were soon lacerated by the sharp lava, and they had to be rescued by helicopter. 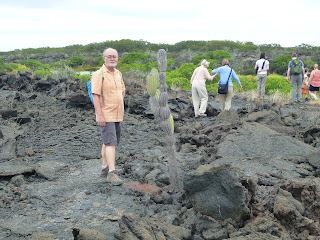 Since lava is usually too porous to hold rainwater, the lack of freshwater makes the islands even more inhospitable to life.  Carlos pointed out the lichen on the lava fields as being possibly the first form of life that would develop after the lava flows had cooled.  More complex forms of life would have arrived by migration from the mainland, and then by evolution they would be adapted for the diverse environments of the islands.

We visited a tortoise breeding center run by the National Park Service not far from Puerto Villamil.  When Darwin visited the islands in 1835, there were probably hundreds of thousands of giant tortoises.  Today, the total population is estimated to be around 15,000 individuals.  In the 19th century, many of the tortoises were taken onto whaling boats as a good source of food, because the tortoises could survive for many months without food or water.  Today, the biggest threat to the tortoises are the black rats that eat tortoise eggs and young tortoises.  That's why an artificial breeding program is necessary to preserve the tortoises.  The black rats are identified as an "invasive" species introduced by human beings.  Similarly, feral goats are another "invasive" species that threatens the tortoises by eating the vegetation that they feed on. 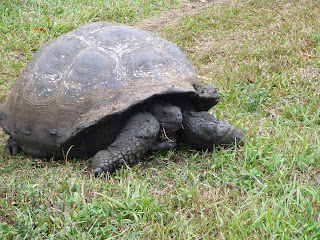 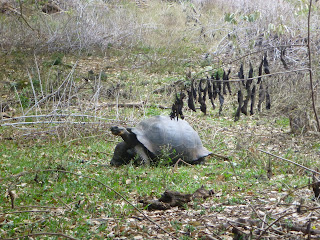 The National Park Service has eradicated the feral goats from some parts of the islands, and now there is a program for eradicating the black rats.  As I have suggested in a previous post, this illustrates the evolutionary basis of morality as rooted in human desires.  There is no cosmic standard by which we can say that giant tortoises are "better" or "higher" than black rats and goats.  But if we take an interest in the tortoises, if we want to see them and study them, and if tourists come to the Galapagos to see them, then we can decide that the tortoises should be protected and the black rats and goats should be eradicated.  Here we appeal not to some ecocentric or biocentric standard of value--as some "deep  ecologists" have asserted--but to our anthropocentric desires.  Strictly speaking, even the distinction between "native" or "endemic" species and "invasive" species is a human value judgment, because even the "native" species were originally "invaders" from the mainland.  Our management of the distribution of life forms in the Galapagos Islands is an exercise in human niche construction, by which we construct the environment of the Galapagos to create a cognitive and aesthetic niche to satisfy our natural desires.
Posted by Larry Arnhart at Tuesday, July 09, 2013