An Evolutionary Tour of the Galapagos 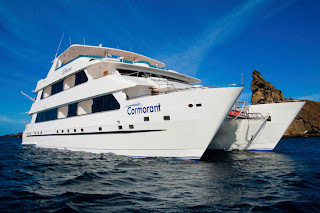 This is a picture of the Cormorant, the boat on which my wife Mary and I sailed around the Galapagos Islands for 8 days (June 15-22).  It's only slightly larger than Darwin's ship, the Beagle, which was 90-feet-long and 25-feet-wide.

When I learned that I would be lecturing on Darwinian liberalism at the Mont Pelerin Society conference in the Galapagos, sponsored by the Universidad San Francisco de Quito, I decided that I wanted to extend my travelling in South America in ways that would help me think about evolution and liberalism.  So my wife and I scheduled a 4-week-long trip to Peru (a week in Cuzco and Machu Picchu) and Ecuador (2 weeks in the Galapagos, a few days in Quito, and 1 week in the rainforest at Sacha Lodge).

In preparing for our trip to the Galapagos, I found four books to be instructive: Darwin's Voyage of the Beagle (especially chapter 17 on the Galapagos); Thalia Grant and Gregory Estes, Darwin in Galapagos: Footsteps to a New World (Princeton University Press, 2009); Edward Larson, Evolution's Workshop: God and Science on the Galapagos Islands (Basic Books, 2001); and Julian Fitter, Daniel Fitter, and David Hosking, Wildlife of the Galapagos (Princeton University Press, 2000).  Grant and Estes use Darwin's published and unpublished writings as well as other documents on the voyage of the Beagle to retrace Darwin's steps through the Galapagos and to recreate his thinking about evolution during and after his time in the islands.  Thalia Grant is one of the daughters of Peter and Rosemary Grant, who are famous for their studies of "Darwin's finches" in the Galapagos.  Larson's book is a comprehensive history of the study of the Galapagos from the first European arrival by Father Tomas de Berlanga, the bishop of Panama, in 1535 to the research of the Grants at the end of the 20th century.  As his subtitle suggests, Larson stresses the theme of how the study of life in the Galapagos supported a scientific view of the cosmos that challenged the traditional view of the world as divinely or intelligently designed.  Wildlife of the Galapagos is a complete guide to the plants and animals of the Galapagos.

Most of the photographs that you will see in my posts were taken by my wife. 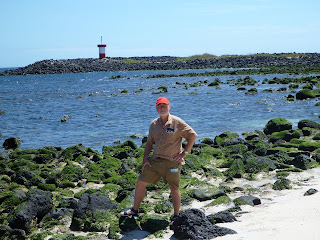 The Site of Darwin's First Landing in the Galapagos, September 16, 1835, on the Island of San Cristobal, Near What Is Now Puerto Baquerizo Moreno


June 15
We entered the Galapagos by flying from Guayaquil to the Baltra airport, which is near the island of Santa Cruz.  We were met at the airport by Carlos Mosquera, our naturalist guide.  Carlos was born and grew up on the island of San Cristobal. 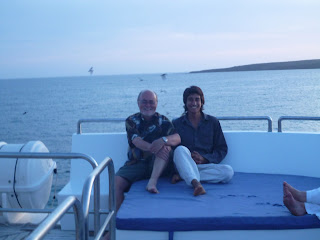 Carlos and Me on the Cormorant 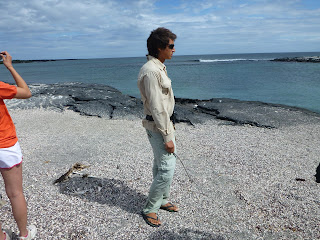 We travelled on a bus across Santa Cruz to meet our boat in Puerto Ayora.  This trip across the island allowed us to see the full range of ecological zones in the islands from the arid coastline to the wetter highlands.

As we entered the moist zone in the highlands, we stopped to hike through a Scalesia cloud forest.  Scalesia is a genus of trees endemic to Galapagos.  The 15 species and 6 subspecies have adapted to different vegetation zones on different islands, varying in size from 1 meter to over 15 meters in height.  Scalesia pedunculata is the dominant species in the Scalesia Zone on Santa Cruz.

We then continued our trip with a stop to see some of the famous giant tortoises.  We saw them on a private farm that sells admission to tourists to see the tortoises, which illustrates the importance of free enterprise ecotourism in preserving endangered species for tourists who will pay to see the species. 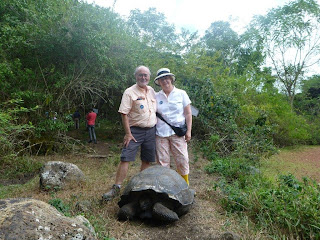 Unlike most of the rest of the world, the dominant land animals in the Galapagos are reptiles rather than mammals.  And like Scalesia and many other plants and animals, the giant tortoises are endemic to the Galapagos and no where else in the world, and they show adaptive radiation--different species are adapted for different islands.  The tortoises are generally considered to be 14 or 15 distinct species.

But if these different kinds of tortoises are not distinct species, but varieties or subspecies of the same species, as some scientists believe, then it's not clear that this is evidence for the evolutionary origin of species.  This might show microevolution (evolutionary change within a species) rather than macroevolution (evolutionary change from one species to another), and if so, creationists could accept this.  This is a crucial issue for how one interprets the evidence in the Galapagos.  To support Darwin's theory, one must find evidence not just of microevolution but of macroevolution.  Darwinists argue that varieties are incipient species, and that microevolutionary changes within a species can eventually bring the macroevolutionary emergence of new species.  But proving this is difficult.  One can see this, for example, in the debate over the famous studies of the finches in the Galapagos by Peter and Rosemary Grant.  I will return to this in another post.

Many of the first Europeans who landed in the Galapagos were shocked to see plants and animals that could be found nowhere else in the world.  Moreover, the differences between the islands was hard to explain.  Why would God choose to create these species here and nowhere else?  And why would He choose to create different species for different islands?  If one is a Biblical creationist who believes that the opening chapters of Genesis provide a literal history of life's origins, then one would have to explain how the giant tortoises and other endemic species moved from Noah's Ark to the Galapagos.  If one believes in intelligent design theory, one would have to explain exactly when, how, and why the intelligent designer chose to create the species endemic to the Galapagos and no where else in the world.

Darwin saw that the species endemic to Galapagos were somewhat different for the different islands while resembling species found on the South American mainland.  Eventually, he inferred that the species on the Galapagos had migrated to the islands from the mainland sometime after the islands had formed by volcanic activity.  This would explain the dominance of large land reptiles rather than mammals, because reptiles were more likely to have survived a long trip by sea to the islands.  This theory is open to testing.  For example, Darwin experimented at his house in Down to see how long seeds could float in seawater while retaining their power for germination.

By contrast, it is not clear whether creationism and intelligent design theory are open to empirical verification or falsification.  As I have observed on this blog, the proponents of intelligent design theory are careful to employ a purely negative style of rhetorical argumentation--looking for difficulties in Darwin's theory and demanding clear step-by-step evolutionary explanations that can be demonstrated, while refusing to offer any testable explanations of their own as to exactly where, when, how, and why the intelligent designer creates new life forms.  Actually, the Biblical creationists are better at offering testable theories.  If the story of Noah's Ark is literally true, then this suggests falsifiable predictions about how species on the Ark moved out from Mount Ararat after the Flood subsided.

After we arrived in Puerto Ayora, my wife and I walked down Charles Darwin Avenue, the main street along Academy Bay, and we noticed that at one end was the Charles Darwin Research Station and at the other was a Seventh Day Adventist Church and School.  The church and school have murals that teach creationism--one shows the animals of Galapagos praising their Creator.

We questioned Carlos about whether there was any debate among the people living in Galapagos about the truth of Darwin's science.  He thought that while some religious believers rejected Darwin's theory as a threat to the power of their churches, there were some who saw no necessary conflict here, because we might conceive of God as originally creating the laws of evolution as the way to execute His creative design.  As I have noted previously on this blog, there have been many theistic evolutionists ever since Darwin first formulated his theory.  And even some of the intelligent design theorists--such as Michael Behe--have embraced some form of theistic evolution.

The primary reason why some religious believers object to Darwin's theory is not, I think, the worry about whether it is scientifically true, but the worry about its moral and political implications.  If human beings are to be explained as purely products of a natural evolutionary process, what does that mean for human morality?  Can our human moral sense be explained empirically as rooted in our evolved human nature?  Or does that moral sense point to some transcendent or cosmic standard of right and wrong?  This was one of the main issues in my lecture at the Mont Pelerin Society conference, where I argued that a Darwinian liberalism could be founded in a moral anthropology rather than a moral cosmology.

In future posts, I will continue my evolutionary tour of the Galapagos.  I will also write a series of posts on the lectures and discussions at the Mont Pelerin Society conference.