An Evolutionary Tour of the Galapagos (4): Love, Reproductive Fitness, and Transcendent Longings

June 18
We navigated to Fenandina and explored the Mangle Point area.  In the afternoon, we went back to Isabella to hike around Urvina Bay.

Fernandina is one of the most pristine of the islands, with few introduced species.

Urvina Bay is a special site because one can see the consequences of geological uplift.  In 1954, this area was raised by up to 10 meters.  In 1994, it was raised by 90 cm.  The evidence for this is everywhere--shells, sea urchin segments, and lots of coral heads--which shows the underwater origins of the land. 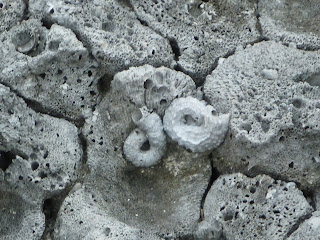 June 19
During the night, the Cormorant navigated to the Espinosa Point area of Fenandina, where we saw lots of sea lions, and Carlos explained their breeding behavior.  The mature females must find suitable areas for breeding--such as a protected tidal pool where the young can swim safely until they are old enough to swim farther out in the sea.  The sea lions are serial polyandrists.  A dominant male will fight for dominance over the breeding territory, but the male's dominance is brief, often only a few weeks.  The females then move on to a new breeding territory with a new dominant male.

We saw more flightless cormorants, and Carlos explained their courtship behavior, which includes the male presenting the female with pretty ornaments for the nests.

We also talked about the frigate birds, who inflate their red neck pouch for sexual display, which seems to be an example of sexual selection.  Males with such inflated pouches cannot even feed themselves. 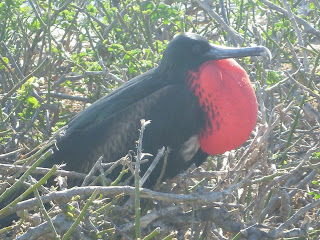 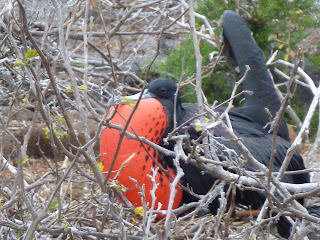 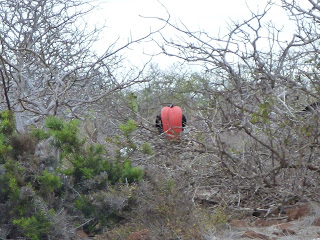 Repeatedly, Carlos brought up the courtship and breeding behavior of the animals we saw, and he explained it in Darwinian terms as evolved adaptations for reproduction.  This fascinates us because we see how similar this is to our human behavior in courtship, conjugal bonding, and parental care, although the behavioral reproductive patterns differ for different animals in ways that are adaptive for them.  This intimates to us that our deepest desires for loving and being loved might be explained scientifically as evolved strategies for reproductive fitness.

Of course, many people deny this Darwinian explanation of human behavior.  As I have noted in some previous posts, existentialist conservatives like Peter Lawler argue that Darwinism is only partly true, because while it explains our animal sociality, it cannot explain our deepest existential longings for love and meaning in our lives and our fear of death.  We cannot live with the Darwinian teaching that we are just very smart social mammals who live for a time and then die, in a universe that does not care for or about us.  We are moved by transcendent longings for a universe in which we are the center of attention:  It's all about me!

A tour of the Galapagos does not support such transcendental human narcissism.  This is a world that evolved for millions of years without any human beings present.  In fact, much of the charm of the Galapagos, as Darwin noted, is that since the animals did not evolve any instinctive fear of humans, they seem remarkably tame--we can move among them, and they do not hide or run away.

Galapagos is a world born out of volcanic fire, a world of great beauty, but also a world of suffering and death.  It is a world indifferent to our human cares.  But it is also a world that appeals to us: we care about this world, and we want to preserve and cultivate its biodiversity, because we find deep satisfaction in seeing it, studying it, and pondering how it illuminates the cosmic process of evolution that gave birth to us, and to our capacity for seeing, studying, and pondering the meaning of it all during the brief lives that we have on this Earth.
Posted by Larry Arnhart at Tuesday, July 09, 2013