The National Museum of Anthropology in Mexico City 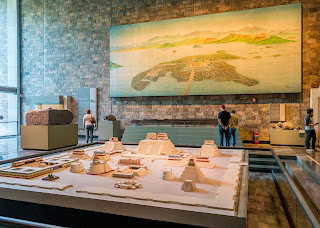 A Room Devoted to Tenochtitlan, the Aztec Island City with Four Causeways Joining it to the Four Points of the Universe

While travelling in Mexico City recently, I visited the National Museum of Anthropology, which offers a magnificent display of the archaeological and ethnographic history of Mesoamerica.  The concept of Mesoamerica was developed in 1943 in an article written by Paul Kirchhoff, a German anthropologist who lived in Mexico--"Mesoamerica: Sus Limites Geograficos, Composicion Etnica y Caracteres Culturales," Acta Americana 1 (1943): 92-107.  He identified Mesoamerica as a cultural area of pre-Hispanic civilizations that extended from what is now central and southern Mexico to the Central American countries of Guatemala, Belize, El Salvador, and parts of Honduras and Costa Rica, in the time period between 2500 B.C. and 1521 A.D.  1521 was the year that Tenochtitlan, the city of the Mexica (the Aztecs), was conquered by the Spanish.  Tenochtitlan was located in the Central High Plateau of Mexica in the center of what is now Mexico City.

Mesoamerica included many peoples with different languages and ethnic traditions: the Olmecs, the Mayas, the Aztecs, the Nahuas, the Zapotecs, the Mixtecs, and others.  Despite their many differences, they shared an agricultural way of life based on the cultivation of seeds and vegetables such as chia, maguey, cocoa, beans, squash, chili, and--most importantly--corn.  They also shared in the cultural development of calendars, pictographic writing systems, arts such as pottery, distinctive architecture, and some common religious beliefs.

The National Museum of Anthropology was opened in 1964 with the support of the Mexican government to present the cultural history of Mesoamerica as part of the national identity of Mexico.  The success of this enterprise is clear as one moves through the museum and sees the many groups of Mexican school children and adults as well as foreign tourists studying the exhibits and listening to lecturers.

What caught my attention was how the museum tells the story of Mesoamerica within the narrative framework of Darwinian liberalism.  It's Darwinian in the sense that everything is explained through the Darwinian science of the biological and cultural evolution of humanity.  It's liberal in the sense that it teaches a liberal morality of equal liberty and tolerance that respects the diversity and unity of the human species.  I have seen the same theme in other museums around the world--in Scotland, the island of Guernsey, and Ecuador.  I have written about this here, here, and here.

In these museums, one can see how the "Evolutionary Epic" or "Big History" has become the scientific replacement for religious origin stories in shaping the popular understanding of the place of human beings in the universe.  I have written about this here and here.  In the National Museum of Anthropology, one can see some of the religious stories of divine creation told by the Mesoamerican people.  For example, the Mayan text Popol Vuh described how the gods created human beings from a mixture of white and yellow corn.  Later, the Spanish conquerors brought with them Christian priests who taught the biblical creation story of how God formed Adam from the dust of the ground and breathed into his nostrils the breath of life (Genesis 2:7).  But when one enters the first hall of the museum--"Introduction to Anthropology"--the first displays are about the natural evolution of the human species from primate ancestors, which includes this recreation of the fossil hominid named "Lucy"--Australopithecus afarensis: 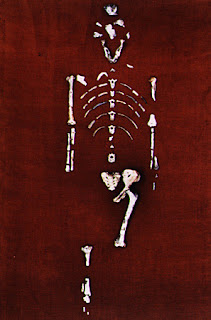 And thus the visitors to this museum are taught by implication that the Darwinian story of human evolution by natural selection is a scientific truth, while the religious origin stories of the Mayans or the Christians are poetic myths.  A Darwinian anthropology can explain these myths as cultural products of religious imagination, while denying that they have any literal truth.

The Darwinian story of human evolution starts in Africa with the first human ancestors such as Lucy, it then traces the migration of human beings around the world.  The museum tells that story of global migration, including the crossing from Asia to North America, as depicted in this mural: 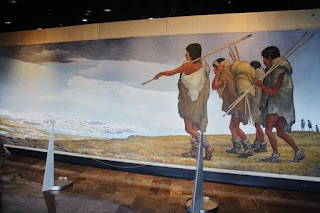 The museum's explanation of this mural includes a quotation from Jose de Acosta's Natural and Moral History of the Indies (1590).  Acosta was a Jesuit priest who had lived in the New World, and who wrote this book as a physical, biological, and cultural history of the New World, which included his speculation that the indigenous people of the Americas were descendants of human beings who had crossed over a land bridge between Asia and North America.  By the 20th century, this had become the generally accepted view of evolutionary anthropologists.  The Americas were initially settled by people from far northeast Asia crossing through Berlingia, the land bridge connecting to northwestern North America during the Pleistocene epoch.  Genomic analyses of ancient human remains from Late Pleistocene Alaska can show how indigenous Americans branched out from the initial founding population of Ancient Beringians (J. Victor Moreno, et al., "Terminal Pleistocene Alaskan Genome Reveals First Founding Population of Native Americans." Nature 553 (2018): 203-207.)
John Locke read Acosta's book and quoted from it in his Second Treatise of Government as an account of human beings in the state of nature--in the original human condition when human beings lived as hunter-gatherers.  "In the beginning," Locke declared, "all the world was America."  I have written about this here.

This shows the significance of the European discovery of the New World.  For the first time in human history, the entire Earth was bound together in a human network of global exchange and communication, which made possible a universal history of humanity.  Darwin's 5 year voyage on the Beagle around the world was part of this global exploration that made such a universal history possible.

That universal history supported the modern anthropological concept of the unity and diversity of humanity that has been part of the liberal teaching of human equality, liberty, and tolerance.  The museum portrays this liberal teaching at the end of the first hall in a mural by Jorge Gonzalez Camarena: 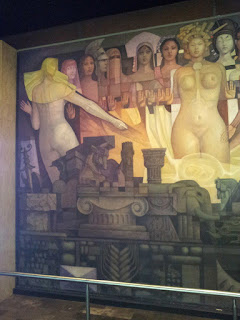 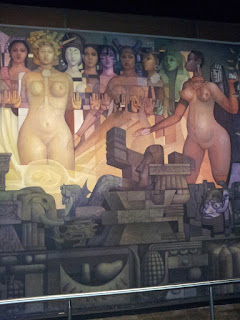 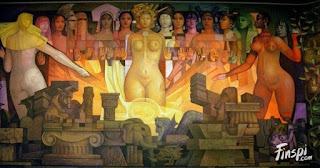 This mural celebrates the beautiful diversity of human races and cultures as products of Darwinian evolutionary history.  At the center of the mural is a female who apparently represents the future of humanity, as a species that is a mixture of all races and cultures.  Just below her is a child not yet born in a glowing womb.

On either side of this central female are 14 females symbolizing--from right to left--a sub-Saharan African, an Egyptian/North African, a Mayan/Mesoamerican, an indigenous South American, an indigenous North American, a Polynesian/Melanesian, a Japanese/East Asian, a Southeast Asian, a South Asian/Indian, an Arabian, a Hellenic/Mediterranean, an Iberian, and Celtic and Northern European peoples.

At the bottom of the mural are symbols of the domesticated plants of the agricultural way of life, which supports urban civilized life.  These symbols include maize, wheat, barley, rice, cassava, potato, yams, taro, sugar beet, and sugar cane.

Finally, on the far right side of the mural--not easily seen in the reproduction above--are several skulls representing the evolutionary hominid ancestors of human beings--those who lived in the evolutionary state of nature.

Camarena's mural is unsatisfying, however, in so far as it suggests a utopian transformation of human nature that overcomes tribalism in a spiritual unification of humanity.  The viewer is left wondering how this could happen.

As one walks through the museum, one sees opposing themes of conflict and cooperation in Mesoamerican history.  On the one hand, one sees religious warfare and brutal violence--such as human sacrifice to please the gods--that gives supernatural legitimacy to ruling elites exploiting those they rule.  I have written about how moralistic religion in the early states promoted human sacrifice here. 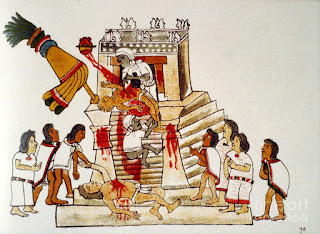 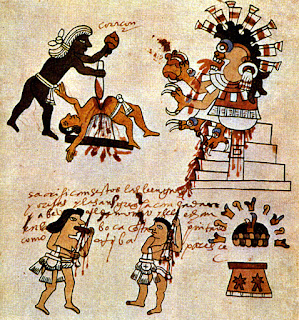 On the other hand, one also sees evidence of long-distance trading networks and marketplaces where people from different societies are brought together through cooperative exchange. 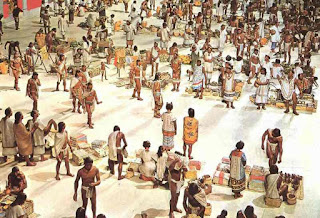 Does this suggest that even if the human propensity to tribalism can never be fully overcome, a liberal social order can promote the expansion of cooperative peaceful exchange through trading relationships and open societies based on pluralism and toleration?