Let's admit it.  We've all thought about pseudocopulation.  So let's talk about it.

One kind of pseudocopulation is male insects copulating with orchids that look and smell like female insects.  You can see some videos of this here and here.  But I warn you that they contain adult content.

Anne Gaskett at the University of Auckland and her colleagues have shown how orchids mimic female insects in ways that attract bees, wasps, and flies to copulate with them and then serve as polinators.  Most flowers attract and reward insect pollinators with nectar, but orchids attract their pollinators with deceptive signals that imitate those produced by female insects.  Orchids can even stimulate male insects to ejaculation (Gaskett et al. 2008).  This serves the reproductive fitness of the orchids, but it's costly for the insects who waste copious sperm.  Some male insects prefer orchids to real females!  Since this copulation does not actually result in sexual union, it can be called pseudocopulation.

Another kind of pseudocopulation is shown by some starfish and other echinoderms.  Starfish or sea stars are star-shaped marine invertebrates that typically have five arms radiating out from a central disc.  They reproduce both sexually and asexually.  Most species of starfish reproduce sexually, and they have separate male and female individuals that produce gametes.  Through spawning, eggs and sperm are sprayed into the water, and fertilization occurs outside their bodies.  For most species, the offspring develop on their own with no parental care.  But for some species, there is brooding, in which the offspring are attached to the mouth of the female, so that she can keep the eggs clean and healthy and protect them from predation--an amazing display of parental care in an animal that has no brain!  (See Hamel and Mercier 1995.)

Three species of starfish--Archaster typicus, Neosmilaster georgianus, and Archaster angulatus--are known to show pair mating in pseudocopulation, in which one starfish lays on top of another (Keesing et al. 2011).  During spawning events, large numbers of mating individuals mate synchronously.  This is not true copulation, because the male does not inseminate the female.  But it seems that pseudocopulatory mating ensures a high level of fertilization of eggs by sperm floating in the water. 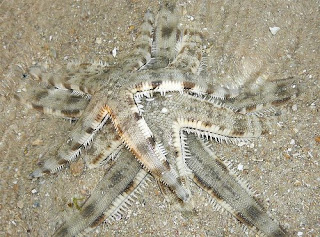 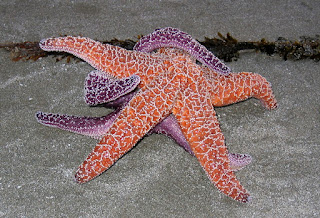 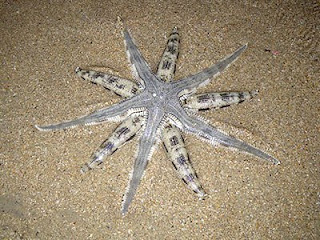 For more on this, you can go to the echinoblog here.

Although copulating pairs of starfish are mostly male on female, sometimes it's male on male.  In one study, a sample of 10 mating pairs were taken from the west coast of Australia, and 8 were male on female pairs, while 2 were male on male (Keesing et al. 2011).  Pairs remain in mating position for up to 24 hours.  So the pseudocopulation of these starfish show both heterosexual and homosexual behavior.

Sea urchins are another kind of echinoderm that form mating pairs.  Sea urchins have spherical bodies covered by moveable spines that make them look like little hedgehogs.  For most of the year, they live separate from one another.  But in the spawning season, they move together into pairs with their spines interlocked.  Forming mating pairs seems to increase the external fertilization of eggs by sperm. 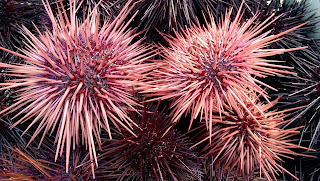 Apparently, sea urchins cannot recognize sex differences, and so their pair mating occurs randomly.  Homosexual and heterosexual pairs occur at frequencies that would be expected by chance.  So in a population with a 1:1 sex ratio, random pairing produces male/female pairs 50% of the time.  Since the density of deep-sea echinoderms is normally low, this pairing increases the chances of successful fertilization.  In one study, 26 pairs were collected, and of these, 12 were female/male, 7 were female/female, and 7 were male/male (McCarthy and Young 2002; Young et al. 1992).  These echinoderms thus show indiscriminate sexual behavior directed towards all sexes, with both homosexual and heterosexual behavior.

Echinoderms arose as an early branching lineage of animals.  While the first vertebrates appeared about 500 million years ago, echinoderms first appeared in the Lower Cambrian geological time period--from 542 to 511 million years ago (Smith and Zamora 2013).  It is likely, therefore, that echinoderms have the traits of the ancestral organisms in which sexual behaviors evolved.  This suggests that indiscriminate sexual behavior with both same-sex and different-sex mating was the original ancestral condition for animals.

Homosexual behavior has been observed in over 1,500 animal species widely distributed across most evolutionary groups of animals (Bagemihl 1999; Poiani 2010; Sommer and Vasey 2006).  For many evolutionary biologists, this creates a "Darwinian puzzle": it seems hard to explain how homosexuality has repeatedly evolved and persisted in many different lines of evolutionary descent despite the fact that it reduces reproductive fitness.  To explain this, some evolutionary theorists have tried to show how homosexuality might have some adaptive benefits that outweigh its maladaptive costs: for example, homosexuality might have some indirect fitness benefits for the relatives of homosexual individuals.  Other theorists argue that homosexuality must be seen as a maladaptive trait that arises by accident:  for example, homosexual mating could be simply a matter of mistaken identity.

But notice the usually unstated assumption that homosexual behavior is an anomaly that requires some special explanation because it departs from an ancestral population that was exclusively heterosexual.  Recently, Julia Monk and her colleagues have challenged this undefended assumption that heterosexuality is the baseline condition for animals as showing a cultural bias for seeing homosexuality as abnormal or unnatural.  Monk and her collaborators identify themselves as "LGBTQ+ scientists," who are free from the "heteronormative bias" of most scientists.  They propose considering an alternative hypothesis that starts with a different baseline: what if ancestral sexual behavior was originally indiscriminate in mixing homosexual and heterosexual behavior, because animals were mating randomly with either same-sex or different-sex individuals?  This hypothesis of indiscriminate sexual behavior from the origin of animal sexuality would seem to be the most parsimonious explanation for what we see today--the widespread mixture of homosexuality and heterosexuality across most animal groups (Monk et al. 2019).  And they point to echinoderms as manifesting this ancestral condition of bisexuality.

Monk and her colleagues have summarized their reasoning in a blog post for Scientific American here.  They have also received a lot of press coverage including an article in The New York Times.

Despite their claim that with their alternative hypothesis homosexuality is not a "Darwinian puzzle," Monk and her collaborators must still solve the puzzle.  Even if we assume that homosexuality arose at the beginning as part of the original condition of animal sexual behavior, we must still find a Darwinian explanation for the persistence of homosexuality despite its costs for reproductive fitness.  To do that, they will have to show either that the fitness costs of homosexuality are not as high as they might seem, or that homosexuality has some indirect fitness benefits that outweigh the costs.  that will be the subject of my next post.

Some of my previous posts on animal homosexuality can be found here and here.

Smith, Andrew B., and Samuel Zamora. 2013. "Cambrian Spiral-Plated Echinoderms from Gondwana Reveal the Earliest Pentaradial Body Plan." Proceedings of the Royal Society B 280: 20131197.