In various posts (here and here), I have argued that the Darwinian science of human evolutionary history largely confirms John Locke's view of the state of nature as the natural condition of equal liberty, while also confirming (here) that Lockean liberal social orders can approximate that equal liberty that human beings enjoyed in the state of nature.

Over the past 10 years, Darwinian social scientists have brought more precision to the empirical study of the evolutionary history of inequality by finding ways to calculate the Gini coefficients for inequality in human societies over the past 10,000 years; and this new research supports the Lockean liberal account of human history.

The Gini coefficient is a statistical measure of the distribution of income or wealth in a society that ranges from 0 (every individual or household has exactly the same amount) to 1 (one individual or household owns all of the income or wealth, and others have nothing).  (The Wikipedia article on the Gini coefficient is a good survey.)  Gini coefficients below 0.30 are considered indicators of extremely low inequality.  Gini numbers above 0.50 are indicators of extremely high inequality.  So, for example, if the richest 20% have 80% of all income, that would count as an income Gini coefficient of 0.60.  That's the income Gini number for Haiti, which is one of the highest in the world.  The number for the U.S.A is in the middle--0.40.  The lowest numbers are usually for the Nordic social democracies--such as Denmark, Norway, and Finland--which are around 0.24.

The 21 societies studied by Borgerhoff Mulder and her coauthors included hunter-gatherer, horticultural, pastoral, and agricultural societies.  They calculated the intergenerational transfer of three kinds of wealth--material (such as household goods, land, and livestock), embodied (such as strength, knowledge, and skills), and relational (such as the individual's position in social networks). They found that material wealth was more easily transmitted across generations, as compared with embodied or relational wealth.  And therefore there was more inequality in pastoral and agricultural societies where material wealth (such as livestock and land) was important, as opposed to foraging and horticultural societies, where material wealth was less important, and consequently there was less inequality.

They estimated Gini coefficients for wealth at 0.25 for hunter-gatherers, 0.27 for horticuluralists, 0.42 for herders, and 0.48 for farmers.  Hunter-gatherers typically have a strong egalitarian ethos, and they found that indeed their level of inequality is much lower than for other societies.  But, still, hunter-gatherers have never achieved absolute equality.  They found that among the foraging societies they examined, a child born into a family in the top 10% of wealth is 3-5 times as likely on average to remain at the top than is a child born into a family in the bottom 10%.

Locke recognized this because while he saw the American Indians in the state of nature as showing relative equality compared with other societies, he also saw that all human societies will have some inequality due to individual differences in age, birth, talents, social networks, and luck, which will make some individuals more highly ranked than others.  So, for example, among hunter-gatherers, some individuals would inevitably distinguish themselves as skillful hunters or as leaders of their groups.  Borgerhoff Mulder and her colleagues confirmed this, and concluded that those Marxist anthropologists who wanted to find "primitive communism" in foraging societies were mistaken (Smith et al. 2010, 31).

Nevertheless, the reputation of hunter-gatherers for being egalitarian is warranted when they are compared with herding and farming societies that have much higher Gini numbers.  And yet, among modern nation-states, those that have Lockean liberal social orders have lower inequality.  The United States has a slightly lower Gini number than the small-scale herding and farming societies.  And the Nordic capitalist welfare states have Gini numbers about the same as the foraging societies.  (I have written about the Nordic social democracies as liberal regimes here.)  This suggests that modern Lockean liberal social orders approximate the equal liberty of human beings in the state of nature.

There are, however, some difficulties in the research of Borgerhoff et al. that have been pointed out by critics.  First, their sample of foraging societies does not include those high-density sedentary coastal foragers with Chiefdoms--such as the Northwest Coast Indians, the Chumash, and the Calusa--who were known to have hereditary nobility and even slavery.

The second difficulty is that their ethnographic sample of foraging societies includes those like the Ache of Paraguay and the Hadza of Tanzania whose foraging life has been altered by contact with modern herding and farming societies.  For that reason, it might not be clear that these foraging societies are really representative of our original evolutionary ancestors (Caldararo 2011; Kelly 2010).  One can respond to this difficulty by pointing out that the Ache and the Hadza have not been completely assimilated into modern societies, and that ethnographers have been able to compile a record of their history before contact (Smith et al. 2011; Hill and Hurtado 1996; Marlowe 2010).  While it is true that people like the Ache and the Hadza are not "living fossils" who have been "frozen in time," it is also true that they at least resemble the societies of our ancient foraging ancestors.

Instead of relying on ethnographic studies of inequality in historical and contemporary populations, Kohler and his colleagues (2017) have gathered archaeological evidence from a sample of 63 sites or groups of sites on four continents dating from around 11,000 to about 2,000 years ago.  For their evidence of inequality, they use house size as a proxy for household wealth.  Measuring the relative sizes of houses as distributed over an archaeological site, they can measure the inequality manifested in the relative wealth of households with large houses versus households with smaller houses (Kohler and Smith 2018). 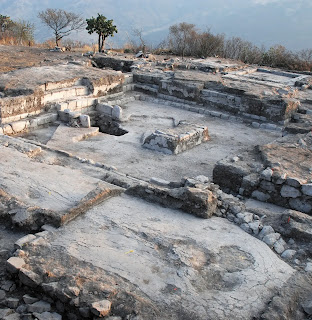 An excavated house at the El Palmillo archaeological site, Mexico

As expected, they found that hunter-gatherers had the lowest Gini coefficients (median = 0.17), the horticulturalists had higher numbers (median = 0.27), and farmers had the highest (median = 0.35).  They were surprised, however, to see that the wealth inequality tended to be higher in the Eurasian sites than in North America and Mesoamerica.  To explain this, they suggested that Eurasia had a greater availability of large mammals that could become domesticated draft animals that could be used for increasing agricultural production and extending the area of land in cultivation, which could have created greater concentrations of wealth in those who controlled this production.

Another possible explanation is that their sample of sites in the New World is slanted towards more egalitarian societies.  For example, they did not include any sites in South America, which could have included the Incan empire centered in Peru, which was probably one of the most unequal agrarian societies, in which llamas and alpacas were domesticated.

And while their Mesoamerican sample included the Mayan city of Tikal with a remarkably high Gini number of 0.62, it also included some cities with surprisingly low Gini numbers, such as Teotihuacan with a Gini of 0.12--lower even than that for the hunter-gatherers!  The archeology of Teotihuacan (AD 400-500) is hard to interpret.  It shows signs of autocratic rule--with its grand avenue and pyramids--but it also shows some signs of broad sharing of power--with a grid of roads, no very large royal palace, and many medium-sized houses.  Thus, pre-Hispanic Mesoamerica seems to exhibit two very different strategies for structuring power--either concentrating and centralizing power in the hands of a few kings and nobles or allowing for a collective holding of power by many individuals, including commoners (Blanton et al. 1996).

Until recent decades, it was common for archaeologists and anthropologists studying ancient Mesoamerica to assume that the prevailing model was the autocratic centralization of power, which ignored the fact that there was evidence in at least some archaeological sites for wide dispersal of power, and perhaps even in some cities something like republican or democratic rule.

I thought about this a few years ago when I was touring the ruins of Tikal, which show a palace facing onto a plaza with pyramids on the side.  It's easy to see the evidence of an hierarchical society ruled by kings, priests, and nobles exploiting the commoners.  Tikal reached the peak of its power in 200-900 AD as the capital of a conquest state.  But believing that human beings have an evolved disposition for freedom and resistance to dominance, I had to wonder whether there was any sign of free societies in Mesoamerica. 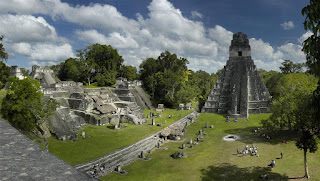 Tikal the Capital of a State that Conquered Tributary Regions

I was intrigued, therefore, to learn about Tlaxcallan, which has been identified by some archaeologists as an ancient republic in Mesoamerica.  When Hernan Cortes first landed on the coast of Mexico in 1519, he heard about the powerful Aztec Empire under the rule of Moctezuma.  Marching his soldiers toward Tenochtitlan, the capital city of the Empire, located where Mexico City is today, Cortes met resistance from some of the indigenous peoples, particularly the Tlaxcaltecas.  He learned that Tlaxcallan was a small polity not far from Tenochtitlan that had successfully resisted the attempts of the Aztecs to conquer them.  He finally persuaded the Tlaxcaltecas to become his allies in his campaign to defeat the Aztecs.  By 1521, the Aztecs were defeated, and Cortes claimed their Empire for Spain.  In his letters to Charles V, the King of Spain and the Holy Roman Emperor, Cortes described the people of Mexico, and he identified the Tlaxcaltecas as a freedom-loving people:


"They had tried with all their forces both by day and by night to avoid being subject to anyone, for this province never had been, nor had they ever had an over-all ruler.  For they had lived in freedom and independence from time immemorial and had always defended themselves against the great power of Mutezuma and against his ancestors, who had subjugated all those lands but had never been able to reduce them to servitude, although they were surrounded on all sides" (Cortes 2001, 66).

He described their government as


"almost like that of the states of Venice or Genoa or Pisa, for they have no overlord.  There are many chiefs, all of whom reside in this city, and the country towns contain peasants who are vassals of these lords and each of whom holds his land independently; some have more than others, and for their wars they join together, and together they plan and direct them" (Cortes 2001, 68).

He also described their market-based economy with a marketplace where over 30,000 people come to buy and sell.

In recent years, archaeologists studying the archaeological sites of Tlaxcallan have seen evidence confirming Cortes's comparison of Tlaxcallan with the Renaissance Italian republics (Fargher et al. 2010a; Fargher et al. 2010b; Wade 2017). In contrast to the political structure of the Aztec Empire--with kingship vested in members of the nobility--the archaeologists have found signs in Tlaxcallan of government by a council with members recruited from the ranks of commoners.  The socioeconomic egalitarianism of the city is manifested in the urban layout of scattered public plazas next to modest houses rather than royal palaces.  The distribution of standardized apartment buildings for common citizens and the fact that the art does not depict individual leaders or dynasties suggest that power was widely shared, and so inequality was low.

I have written about my recent visit to the National Museum of Anthropology in Mexico City (here).  One weakness in that museum's presentation of Mesoamerican history is that it displays the power of Moctezuma's autocratic rule over the Aztec Empire while remaining silent about Tlaxcallan's republican freedom and its denial of imperial rule, which expresses the evolved natural desire to be free from oppressive dominance.

Human nature was originally shaped in the hunter-gatherer state of nature that was a condition of equal liberty.  Consequently, we can expect that social orders that approach that original condition of equality and liberty will arise throughout human history.

Caldaro, Niccolo. 2011. "On the Use of Contemporary 'Hunters and Gatherers' as Models for Prehistoric Patterns of Wealth Distribution." Current Anthropology 52: 265.