Six Solutions for the Darwinian Puzzle of Homosexuality

Homosexuality has been seen in hundreds of species of animals, including human animals.  For that reason, it is a mistake to argue--as Thomas Aquinas did--that human homosexuality is "contrary to nature" because no other animals engage in homosexual activity.

Aquinas pointed to birds as manifesting the natural law for monogamous heterosexual mating and parental care of offspring.  Now we have evidence that at least 93 species of birds engage in homosexual behavior; and some of these birds show long-term monogamous pairing of females who jointly raise their offspring, which shows that animal homosexuality can achieve what Aquinas identified as the two natural ends of sexual mating--conjugal bonding and parental care (Bagemihl 1999, 479-655; Kotrschal et al. 2006; MacFarlane et al. 2010). 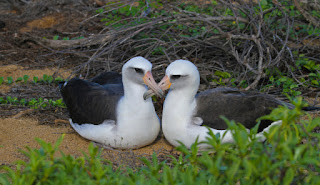 For example, this female-female Laysan albatross pair at Kaena Point Natural Area Reserve on Oahu, Hawaii, share in the incubation of eggs and feeding chicks.  Over 30% of the Laysan albatross nests from 2003 to 2012 were attended by female-female pairs (Young, Zaun, and VanderWerf 2008; Young and VanderWerf 2014).  The Laysan albatross can lay and incubate only one egg per year.  Most of the female-female pairs that fledged chicks in more than 1 year raised at least one chick from each female, so that both females had opportunities to reproduce.  Most of the chicks were fathered by males paired with other females, and these males had had sneaky copulations with one or both of the females in the same-sex pairing.  The female-female pairs raised fewer offspring on average than male-female pairs.  The annual productivity of females in female-female pairs was 80% lower than that in male-female pairs.  But still this is better than for an unpaired female to try to incubate an egg, rear a chick, and find food without any help.  Apparently, the female same-sex coupling here and with other birds is a response to a shortage of males.  In this colony of albatrosses on Oahu, 60% are female.  In these circumstances, the females who pair with another female are making the best of a bad job.  They probably wouldn't choose to pair with other females if there were enough males to go around.

This suggests that by nature the best conditions for reproducing and rearing offspring are a heterosexual pair of parents caring for their offspring, but that a homosexual pair caring for their young can be successful in circumstances where they imitate or approximate that natural standard, which would be the natural law argument for same-sex marriage and parenting.  Previously, I have argued (here) that that was the ultimate issue in the U.S. Supreme Court's decision in Obergefell v. Hodges (2015).

Even as these females engage in same-sex pairings, it's not clear that they are truly homosexual in the sense of having a durable preference for same-sex sexual behavior.  After all, their reproduction depends on copulating with males.  So they might be better identified as bisexual in being open to either opposite-sex or same-sex behavior depending on their opportunities.

Only two animal species have shown some individuals with an exclusively same-sex preference for life, even when partners of the opposite sex are available--humans and domestic sheep (Ovis aries) (Roselli et al. 2011).  Observations of domestic rams from around the world confirm that as many as 8% show a sexual preference for other rams.  And even when they are free to choose between estrous ewes and sexually active rams, some rams will show a same-sex mate preference.

1. Kin altruism selection.  Edward Wilson and some other biologists have applied William Hamilton's theory of kin selection to explain homosexuality as kin altruism (Wilson 1975, 1979; Kirkpatrick 2000).  According to Hamilton, the inclusive fitness of a trait depends on both direct fitness (reproducing through one's direct offspring) and indirect fitness (the reproductive success of one's close relatives).  In some circumstances, evolution might favor a trait that reduces one's direct fitness in order to devote resources to one's collateral kin.  This could apply to homosexuality if homosexuals promote the reproductive success of their relatives, perhaps by helping nephews and nieces.

In many societies, for example, homosexuals have become shamans or priests who could use their privileged status to help their relatives.  The word "nepotism"--from the Latin nepos for "nephew"--arose originally as the term for the Medieval and Renaissance popes and bishops of the Catholic Church who often appointed their nephews to positions of power in the Church.  As I have indicated in a previous post (here), there is a long history of the Catholic priesthood and episcopate being dominated by homosexuals.

This evolutionary theory of homosexuality as kin altruism would require evidence that homosexuals do indeed show an avuncular care for their relatives that increases their indirect reproductive fitness sufficiently to outweigh the loss of direct reproductive behavior.  Survey studies of homosexual men in Western Europe and North America have failed to find that homosexuals extend more care to their relatives than do heterosexual men (Bobrow and Bailey 2001; Rahman and Hull 2005).  By contrast, some studies in Samoa (Vasey et al. 2010; VanderLaan et al. 2013) and in Java (Indonesia) (Nila et al. 2018) have reported greater avuncular tendencies in male homosexuals as compared with male heterosexuals.  So the evidence for this theory is weak at best.

2.  Overdominance selection.  In the case of overdominance, a "gay allele" would result in homosexual behavior in an individual who has received this allele from both parents (homozygous), but an individual receiving this allele from only one parent (heterozygous) would be heterosexual and would have increased fitness over the homosexual.  This would be similar to the famous case of sickle-cell anemia in Africa: those who are homozygous for the sickle-cell allele suffer from this genetically inherited disease, but those who are heterozygous for this allele have some resistance to malaria; and therefore this allele is maintained in human populations exposed to malaria.  Although in principle this theory could explain the evolution of homosexuality, there is no clear evidence for it.

3.  Sexually antagonistic selection.  For sexually antagonistic selection, the idea is that a hypothetical gay allele would result in reduced fitness when expressed in males who become homosexual, but this would be counterbalanced by greater fertility when the allele is expressed in females.  This is one possible explanation for why some domesticated male sheep show a lifelong homosexual preference, but it's not clear whether this is true for wild sheep.  Domestic sheep have been bred by farmers to produce highly fertile females, and it could be that the genetic factors favoring fertile females also favor homosexual males.  However, there is little evidence for this.  In one experiment comparing male offspring from high and low fertility lines of ewes, there was no evidence that selection for high fertility ewes favored same-sex oriented rams (Stellflug and Berardinelli 2002).

4.  Alliance formation theory. Many animals engage in homoerotic behavior--same-sex genital contact that is experienced as pleasurable--and this often seems to strengthen the social bonding of individuals.  Bonobos, for instance, have become famous for how they use polymorphous sexual acrobatics as a social glue for binding individuals in alliances--including female-female alliances that allow the females to dominate the males.  This has led some evolutionary psychologists to speculate that homoerotic behavior could have evolved among human ancestors as a mechanism of affiliation that creates same-sex alliances that had adaptive value (Muscarella 2000).

In many human societies, adolescents and young adults go through a period of sex-segregated social and physical isolation, living on the periphery of their societies; and same-sex friendships reinforced by homoerotic behavior could have helped them move up in social status.  Moreover, these social alliances could have helped males to mate with females for reproductive benefits.  At the same time, female same-sex alliances could have helped females raise their offspring when the fathers were not around to help with parental care.  In ancient Greece and Rome, young men engaged in homoerotic friendships with older men who sponsored their social advancement.  When these young men reached full adulthood, they could marry women and form families.

The evidence for this theory is limited.  Although sometimes in some societies, homoerotic behavior can foster alliance formation, it seems to be more common for same-sex alliances to arise from friendly affection and mutual trust without homoerotic activity.

Another problem for this theory is that it's not clear that it's really about homosexuality in the sense of exclusive homoerotic preference, because it assumes that human beings have evolved to be naturally disposed to both homoerotic and heteroerotic behavior, so that same-sex friendships reinforced by homoerotic activity will lead to social alliances that facilitate success in heterosexual mating and parenting.

5. The bisexual advantage.  Another way to resolve the Darwinian puzzle of homosexuality is to deny that homosexuality really is an evolutionary puzzle.  There would be a puzzle if sexual orientation was a strictly binary trait, so that an animal must be either homosexual with no reproductive fitness or heterosexual with high reproductive fitness.  In that case, it would indeed be puzzling that homosexuality has not been eliminated by natural selection.  But if in fact sexual orientation is a continuously variable quantitative trait influenced by many genes interacting, ranging from exclusively homosexual preference through degrees of bisexuality to exclusively heterosexual preference, then there need be no Darwinian mystery about this (Sell 1997),   Continuously variable traits can have fitness costs at the phenotypic extremes, but such traits will persist because these fitness costs are low on average in evolutionary history (Lande 1976).  After all, throughout most of human history, most homosexuals have chosen to enter heterosexual marriages in which they have produced and reared children.

Defending this bisexual advantage theory, Savolanen and Hodgson (2016) explain this theory as predicting:

"There is some behavioral as well as genetic support for this bisexual advantage hypothesis.  First, good estimates of the frequency of bisexuality do not exist; however, the majority of human and nonhuman animals that participate in homosexual sex also participate in reproductive sex (Kirkpatrick 2000; Vasey 1995).  Second, the expression of homosexual behavior is known to be condition-dependent in humans.  For example, having spent time in the US Navy or in a British boarding school increases the likelihood of having had homosexual experience (Kirkpatrick 2000).  Finally, genomic surveys looking for genes that influence sexual attraction have failed to find any loci that strongly predict homosexuality (Sanders et al. 2014)."

6.  The epigenetic model.  Epigenetic effects are chemical modifications to DNA or to the proteins associated with DNA that don't involve changes to the DNA sequence itself.  These epigenetic markers regulate the expression of genes.  William Rice and his colleagues (2012, 2013) have developed an epigenetic model of how the transmission of epigenetic marks that influence sensitivity to androgen hormones in fetuses could explain homosexual orientation.

Although this seems theoretically possible, there is not yet any clear evidence to support it.

Lande, R. 1976. "The Maintenance of Genetic Variability by Mutation in a Polygenic Character with Linked Loci." Genetical Research 26: 221-235.

Muscarella, Frank. 2000. "The Evolution of Homoerotic Behavior in Humans." Journal of Homosexuality 40: 51-77.

Rice, William R., U. Friberg, and S. Gavrilets. 2012. "Homosexuality as a Consequence of Epigenetically Canalized Sexual Development." The Quarterly Review of Biology 87: 343-368.