If I had had the opportunity to hike the highlands of Floreana, I would have looked for land snails, which are said to be abundant there in some spots.  There are seventy species of Bulimulus land snails that are endemic to Galapagos.  The stunning variation in these species both between the islands and within each island make them one of the best examples in the world of adaptive radiation. 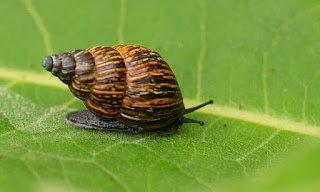 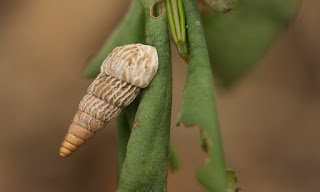 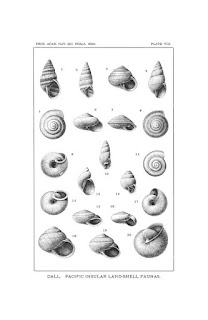 Examples of the Variety of Land Snail Shells, the Top Four are from Galapagos

What I find most fascinating about this is how speciation can create diverse adaptations for extremely small microhabitats, so that these snail species fill distinct and very narrow ecological niches within the islands.  Unfortunately, the disturbance of these microhabitats from human beings--as, for example, the growing human population on Santa Cruz Island--has led to the extinction of many species.  There is some evidence that two-thirds of the seventy species of Galapagos land snails cannot be found today.

Darwin collected as many as 15 species of bulimulid land snails endemic to Galapagos.  Such adaptive radiation in the islands raised at least two kinds of questions for him.  First, how did the ancestors of these snails reach the islands?  Since land snails are easily killed by salt, it's hard to see how they could have floated across hundreds of miles of sea.  At his home in Down, as reported in Origin of Species, Darwin experimented with putting snail eggs in salt water, and he found that they sunk and died.  But then it occurred to him that when hibernating, land snails seal up their shells to prevent desiccation.  He found that these sealed shells could be immersed in salt water for up to 20 days, and they survived.  He speculated that sealed shells could be floated in chinks of drifted timber across hundreds of miles of ocean.

He also considered the possibility that land snails could have travelled to remote islands on the feet of birds.  He suspended a duck's feet in an aquarium where eggs of fresh-water snails were hatching, and he found that the shells would attach to the duck's feet, and they would survive for up to 20 hours, which might be enough time for the birds to fly hundreds of miles across the sea.  More recently, some scientists have found that birds can be fed land snails, and some of the snails can survive when they come out the other end of the bird (Shinichiro Wada, "Snails Can Survive Passage Through a Bird's Digestive System," Journal of Biogeography 39 [2012]: 69-73).  This illustrates how evolutionary theory is open to experimentation.

The second question about the adaptive radiation of land snails is how exactly does evolution by natural selection explain this?  A general principle that applies here is divergence.  Darwin saw that within species, the competition for resources tends to favor forms that "become adapted to many and highly diversified places in the economy of nature" (Autobiography, 1959, 121).  That this has happened with the Galapagos land snails is supported by the evident gathered by Parent that the richest of species is positively correlated with habitat diversity.  The largest, oldest, and highest islands have the greatest diversity of niches, and they have also had the largest number of bulimulid land snail species.

One factor in this adaptive radiation is the need for land snails to avoid dehydration.  At the highest altitudes, there is plenty of moisture.  At the lowest altitudes, the conditions are arid.  One can see this clearly by travelling across Santa Cruz Island.  As one ascends from the lower arid coastline, one climbs to higher elevations that are much wetter, and the vegetation becomes lush.  At the highest altitudes, the rounded shell of a land snail has relatively large shell opening, and this works because there is plenty of moisture.  But at the lowest altitudes, such a shell creates a risk of dehydration and death; while a pointier shell with a relatively small opening is less likely to dehydrate.  Shells are under genetic control, so those individual snails with shells adapted to their environment will tend to survive, while those with shells not so well adapted are less likely to survive.  Here, then, is natural selection at work.

This supports what Darwin called his "theory of natural selection" as superior to what he called the "theory of special creation"--the idea that each species had to be separately created by a miraculous act of God.  And, indeed, Henry Nicholls, in his book The Galapagos: A Natural History, concludes his section on the evolution of the Galapagos land snails by declaring: "The hardy survivors will have been naturally selected, not by some forethinking, supernatural selector, but by virtue of the simple fact that they didn't die" (67).

But while some creationist scientists do believe that God must create each species separately, others interpret the Biblical doctrine of divinely created "kinds" as suggesting that "kinds" correspond to large taxonomic groups of organisms--perhaps "families"--within which species evolve by natural selection.  So while "kinds" are divinely fixed, "species" are not.  Creationists who take this position can accept the evidence for evolution in Galapagos as compatible with their belief that God is the ultimate Creator of life.  Those scientists today who scorn scientific creationism rarely consider this form of creationism.

I will take up this issue in my next post--on "Finding God in Galapagos."

Alan de Queiroz' The Monkey's Voyage: How Improbable Journeys Shaped the History of Life (Basic, 2014) argues that voyages across salt water have been more common, and more significant, than anyone has realized. The biggest assertion is that New World monkeys began from a single few (or one!) that were probably caught on a washed out clump of soil and vegetation that floated on currents from the mouth of the Congo River to what is now the coast of Brazil.

Not a crazy book by any means, and it is one solution to the real puzzle, "How could Old World and New World monkeys have diverged only 40 million years ago when South America and Africa were already 1,000 miles apart by then?" In fact, the idea seems to be on it's way to becoming conventional wisdom.