Thinking About Galapagos (7): The Natural and Sexual Selection of Marine Iguanas

On the morning of Day 5 (February 1), we were anchored in the harbor of Puerto Banquerizo Moreno, on the island of San Cristobal.  We took a bus to the highlands of the island where we toured the Tortoise Breeding Center.  Here tortoises are breed until they are old enough that they are not vulnerable to predation by rats.  They are returned to the exact area from which their species or subspecies came.  On my first trip to Galapagos, I toured the breeding station on Isabela.  These breeding stations are open to tourists, so that they can see giant tortoises in captivity, when they are hard to see in the wild.  I have noticed that in the scheduling of Galapagos tours, guides make sure that tourists have at least one opportunity to see giant tortoises, because these are the most charismatic animals in Galapagos, and so every tourist wants to return home with some story about seeing them.

In the afternoon, we sadly said goodbye to three of our fellow passengers, including the newlyweds, who had finished their five-day trip on the Cormorant.  We met four new passengers joining us for a four-day tour of the islands of San Cristobal, Espanola, Floreana, and Santa Cruz. 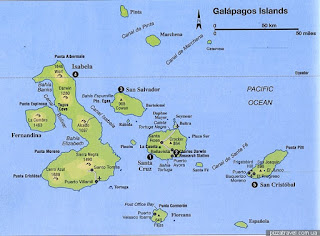 The Cormorant sailed to Kicker Rock, where we tried to snorkel.  But the water was too rough and cloudy.  Overnight, we sailed to the island of Espanola. 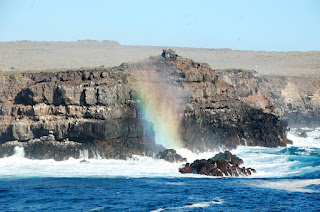 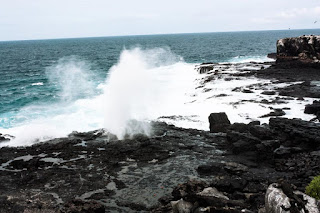 On Day 6 (February 2), we hiked over the rugged terrain of Suarez Point on Espanola, which is the most southeastern of the islands.  It is one of the oldest islands, and it shows less of the volcanic features evident in the other islands.  The whole of its south coast is a cliff that makes a good nesting site for the endemic Waved Albatross.  Indeed, this is the only place in the islands where the Waved Albatross can be seen. 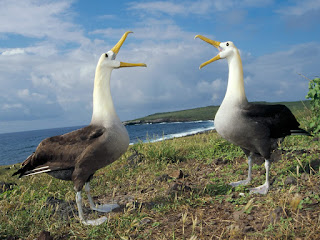 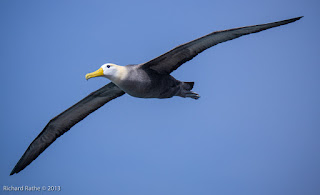 We did not see the Waved Albatross, because they do not return to their breeding grounds on Suarez Point until mid-March.  They engage in an elaborate courtship dance and mate monogamously for life, although there is a high rate of extra-pair copulation (Jouventin et al. 2007).  They lay one egg each breeding season.  Both male and female care for the offspring until the fledgling is mature by December.  The updraft at the Espanola cliff caused by the South-East Trade Winds enables them to take off with ease, although this is a bird that is famous for its comic awkwardness in taking off, but they are elegant fliers, once they are air-born, with wing-spans of up to seven feet.

The Galapagos Marine Iguana is endemic to Galapagos, and it is the world's only sea-going lizard.  They are found on all the islands, but the seven races or subspecies vary greatly in size and color from island to island.  The males are larger and more colorful than the females.  The males are generally black or dark grey, but they take on a red or red-green color during the mating season.  The Espanola race is the most colorful of all. 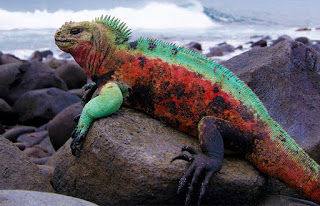 The Brightly Colored Male of the Espanola Race of Marine Iguanas

The survival and reproduction of marine iguanas are quite an achievement that depends on many complex factors affecting mating and foraging as shaped by both natural selection and sexual selection, often in conflict.  Our naturalist guide--Xavier--explained much of this to us, showing his training in Darwinian evolutionary theory as applied to the endemic species of Galapagos.  I  questioned Xavier about this, and he spoke about how every year the naturalist guides must have a "refresher course" to learn about the latest Darwinian research on the life forms on the Galapagos.

The colors in the male begin to brighten at the beginning of the breeding season and then fade at the end of the season.  The females are looking for the best-looking males, and the good looks, Xavier explained, have been shown by scientists to be signs of vigor and good health.  Similarly, Xavier observed, human females might choose the males who are best looking, and who have the high status jobs and the biggest bank accounts.  Although he said this in a joking manner, he clearly meant it to be taken seriously, suggesting that human mating shows some of the same evolutionary logic of sexual selection as is shown in these animals.

Marine iguanas show a lek polygynous mating system (Alcock 2013, 247-54; Hayes et al. 2004).  In such a mating system, males do not search for mates, nor do they defend groups of females, nor do they defend resources that attract females.  Instead, the males gather at a traditional display ground, or lek, within which each male stakes out a territory, with the more dominant males having territories at the center of the lek.  Females come to the lek to choose the males they find most attractive.  Males at the center of the lek tend to mate with more females than do males on the periphery of the lek. This is an example of what Darwin called sexual selection through female choice, which selects for males that have the traits desired by females.  There can be a conflict between sexual selection and natural selection, in that the male traits selected by female choice can conflict with the male traits favored by natural selection, which seems to be true for marine iguanas.

In one study of 213 lekking male marine iguanas on the islet of Caamano off the southern coast of Santa Cruz Island, mating success was correlated with many different male traits (Hayes et al. 2004).  Larger males with ornamentation and free of ectoparasites were likely to have the greatest mating success.  Only the largest males in good condition become lekking males. Satellite males of intermediate size roam around the lek, but without being able to claim territories for themselves, and they seek to court and copulate with females outside the territories.  Sneaker males of small size try to quickly copulate with females before being disrupted by territorial males.  The sneaker males use sperm generated by precopulatory masturbation and stored in pouches so that they can quickly inseminate females.  Both satellite and sneaker males appear to use force to compel copulations.

This sexual selection for mating competes with natural selection for foraging (Vitousek et al. 2007).  During his time in Galapagos, Darwin was intrigued by the foraging behavior of the marine iguana.  He cut open the stomachs of several of them, and found them full of minced seaweed of a bright green or dull red color (Darwin 2004, 344-45).  He had not seen much of this seaweed on tidal rocks, so he inferred that the iguanas must be feeding off this seaweed at the bottom of the sea, at some distance from the coast.  But since the marine iguanas seemed so well adapted for swimming, he was surprised that when frightened, they would not enter the water.  Darwin threw one several times into a deep pool, but each time the iguana quickly returned to land.  He thought this apparently stupid behavior could be explained by the fact that iguanas could be preyed upon by sharks, and so the iguanas had an instinctive propensity to swim to shore as a place of safety.

Later observational studies have shown that Darwin was partly right and partly wrong.  He was partly right about the diet of marine iguanas, in that they feed primarily on two species of red alga and one species of green alga, although the preferred algal species varies among the islands.  He was partly wrong, however, in that only about 5% of marine iguanas forage subtidally by diving beneath the sea to feed on algal beds on the sea floor.  Most of the animals forage intertidally by grazing on algae exposed at low tide.  The larger iguanas tend to forage subtidally, because diving requires the strength of a larger body size, and because larger bodies require the increased nutrition from dense subtidal algal beds.  Most females and smaller males forage intertidally.  Some intermediate-sized iguanas might employ both foraging strategies.

The foraging of marine iguanas is constrained both temporally and spatially.  Intertidal foraging is limited to the period of low tide.  Subtidal foraging is not limited in this way, but it is limited by body temperature.  As ectothermic animals, iguanas must rely on their environmental temperatures to regulate their internal body temperature.  The duration of their foraging underwater in the cool seawater is limited by their need to return to land to warm up their bodies in sunshine.  Contrary to Darwin's inference, marine iguanas cannot swim in the sea for very long, not so much because they need to avoid predation by sharks, but because they need to avoid the declining body temperature from prolonged swimming in the cool seawater.

Darwin also failed to see the conflict here between sexual selection for mating and natural selection for foraging.  Sexual selection favors larger males over smaller males, and larger males must forage subtidally.  But larger males need more food, and when food is scarce, they die of starvation.  During El Nino events in Galapagos, sea surface temperatures increase, and there is a decrease in cold ocean currents and cold nutrient-rich upwellings.  Consequently, the green and red algal species disappear and are replaced in intertidal areas by brown algae, which is hard to digest for iguanas.  During the most severe El Nino years, up to 90% of the marine iguanas can die, and the largest iguanas have the highest mortality rates.  So while sexual selection favors a large body size for males, natural selection favors a small body size.

Amazingly, natural selection has produced an adaptive response to the El Nino environment for marine iguanas.  During El Nino, the body length of adult marine iguanas shrinks by up to 20%, apparently through bone absorption, and then after the El Nino passes, their bodies grow in size.  Those individuals that shrink more during El Nino survive longer. This is the first report of shrinkage in adult vertebrates (Wikelski and Thom 2000).

This looks like a good example of the explanatory power of the Darwinian theories of natural selection and sexual selection, which produce awkwardly conflicting adaptations.

One possible response from scientific creationists is that God did not have to specially create marine iguanas for the Galapagos; rather, He created the family of iguanids as a "kind," which included a genetic potential for producing the traits of marine iguanas as an adaptation for the environment of the Galapagos.  In the Galapagos, there are at least 11 species of iguanids--7 species of lava lizards, 3 species of land iguanas, and 1 species of marine iguanas.  All of these species could stem from an original pair of iguanids that was on Noah's Ark 4,500 years ago.  Some of their iguanid ancestors floated on vegetation to the Galapagos Islands, where their pre-designed genetic potential for evolving into 11 species was expressed as adaptations to the Galapagos environment.  So these scientific creationists concede that the evolution of new species does occur without any divine intervention, but it occurs only within the boundaries of the "kinds" that were originally created by God (Hennigan 2009; Wood 2003).

This theory is empirically testable, because it predicts that we should be able to find the genetic potential for the evolution of all species in the genome of each "kind" or taxonomic family.  It also predicts that all speciation has occurred within a few thousand years.  Both predictions are empirically falsifiable.

I will return to this theory of scientific creationism as applied to Galapagos in a future post on "Finding God in Galapagos."