On March 2, Charles Murray was at Middlebury College to speak about his book Coming Apart, which can be seen as an explanation of the plight of the white underclass in America that supported Donald Trump.  He was not allowed to speak, however, because of the organized mob violence of the students.  Professor Allison Stanger, a Middlebury professor who was to participate in the discussion with Murray, was attacked by the students, and she had to go to a hospital for treatment.  You can easily find videos of the violence on the Internet.  Here's one account of what happened from Inside Higher Ed.  Professor Stanger has written an article for the New York Times. 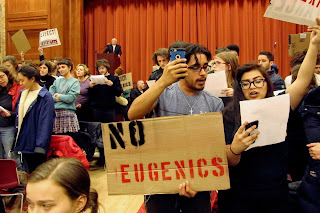 So what provoked this student violence against Murray?  Faculty and students said they were reacting against Murray as a racist, a white supremacist, and a eugenicist.  The evidence for this, they said, was his book The Bell Curve, a controversial book about how IQ might explain some of the class structure of American society.  Some of the protestors have admitted that they have not read that book or anything else written by Murray.

This is a deeply disturbing sign of where we are headed--possibly a time of mob violence to enforce an illiberal suppression of speech on college campuses and elsewhere.

Before Murray arrived at Middlebury, 450 alumni of the college signed a letter protesting his appearance and arguing that he should not be permitted to speak.  They quote from a statement of the Southern Poverty Law Center that Murray is a "white nationalist" who "uses racist pseudoscience and misleading statistics to argue that social inequality is caused by . . . genetic inferiority."  But notice that they do not cite any passages in any of Murray's writings that would support this claim.  I see no evidence that any of  these 450 alumni have read anything written by Murray, much less that they have actually studied and thought about what he has written.  They show no knowledge of Murray's argument that genetically based racial differences in average intelligence and social behavior should be "no big deal" in a free society with equality of opportunity in which there's a chance for all to find valued places for themselves in society.

There is a lesson here about what should be done when controversial speakers are invited to speak on college campuses.  In my classes, I require students come prepared to every class: they have a reading assignment, and they must write a short essay on the reading, copies of which they share with me and with members of their journal group.  As a result, not only have all the students done the reading, they must have thought about the reading's arguments in order to write a response.  Consequently, when they come to class, they are prepared to participate in a lively discussion of the issues raised in the readings.

Why shouldn't something like this be done when controversial speakers are coming to a campus.  Before Murray's speech, Middlebury had weeks during which the students and the faculty could have been reading some selections from his writing, and they could also have read some of the critical responses to his writing.  They might have met in discussion groups to debate the issues raised by the readings.  The primary question for these discussions might have been: Is there evidence in Murray's writings to support the Southern Poverty Law Center's claim that he is a "white nationalist"?

Isn't this--reading, thinking, and talking about ideas--what faculty and students are supposed to be doing at a college?

Anyone who engages in assault should be prosecuted. Anyone who substantially disrupts an invited speaker should be subject to college discipline proportionate to the degree of the offense. But I see no reason to pretend that all or even most campus appearances by an invited speaker are or should be treated as a serious intellectual exercise. Other than commencement speakers, colleges, as such, rarely invite anybody: campus interest groups do. If such a group wishes to invite some charlatan or provocateur -- who was this Milo person and why should anyone care? -- to peddle his or her act on campus, it should be allowed to do so in the absence of legitimate security concerns; and if the audience misbehaves, well, I've already addressed that. It is an imposition on everyone else, however, to expect people to treat the alleged ideas of random invitees as something we should do homework about and earnestly engage.

In this case, there was an intense campus-wide controversy over Murray's appearance, including the public letter signed by 450 alumni. So why shouldn't faculty members take this as an opportunity for an organized discussion with their students of what in fact are some deep issues raised by Murray about American class structure, equality of opportunity, and the connection between intelligence and success in life?