In the afternoon of Day 6, our tour group went snorkeling in Gardner Bay of Espanola.  My wife and I, however, stayed on the boat to recover from our overexposure to the heat and the equatorial sun over the previous two days.  This was the hot season of the year for Galapagos, and we had seen iguanas seeking shaded protection from the midday sun and blue-footed boobies shading their eggs from the sun.  Now we were being reminded that human beings also need protection from excessive heat and sun.  We had been wearing short-sleeve shirts and shorts.  But we noted that the naturalist guides wore clothing that covered every part of their bodies, even gloves and bandanas covering their faces..

Overnight, the Cormorant sailed to Floreana Island.  On Day 7 (February 3), in the morning, we went to Champion Island, a small island (only about 23 acres) off the northeastern coast of Floreana, where we snorkeled.  I was hoping to see the Floreana Mockingbird, but unfortunately I did not. 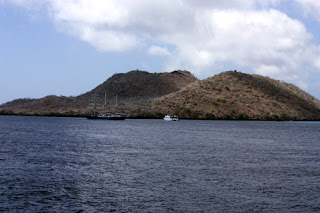 
Here are pictures of the four species of mockingbirds endemic to Galapagos. 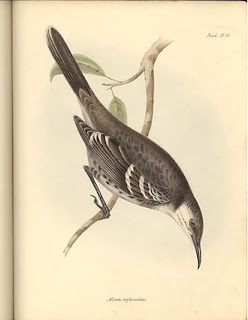 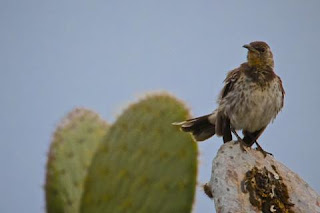 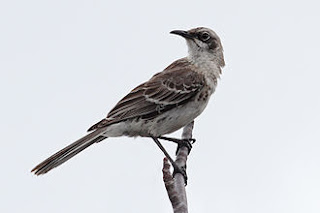 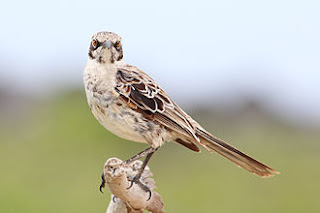 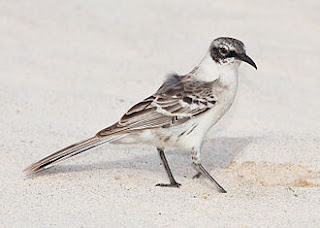 There are, perhaps, no more than 50 Floreana Mockingbirds left on Champion Island, and maybe a few hundred on Gardner Island, another small island off the east coast of Floreana.  On Floreana Island itself, these birds were driven to extinction by 1875 by the introduction of rat, cat, and dog predators and by the deforestation of the island's Opuntia cactus forests by feral goats and donkeys.

This story begins with Darwin's visit to Floreana Island (then called Charles Island).  On September 24, 1835, the Beagle sailed into Post Office Bay.  We sailed into that Bay on the afternoon of Day 7.  It's called Post Office Bay because there's a wooden box behind the beach where people could drop mail.  Inbound whalers could deposit mail, while outbound whalers could pick up letters to take back home.  Even today, tourists drop off postcards for other tourists to pick up and deliver back to their countries.  Although this is a very slow postal system, it's a reminder of how important global postal systems have been for international commerce and science.  Darwin was able to send specimens and information back to England for study by English scientists.  Later, spending the greater part of his life in his house in Down, England, he was able to communicate with people around the world through the postal system, gathering information and ideas for his research.

When Darwin landed at Post Office Bay, he met Nicholas Lawson, who was the acting governor of the Ecuadorian colonists on the island.  In 1830, Ecuador had claimed the Galapagos Islands.  In 1832, the first permanent human settlement in Galapagos was established in the highlands of Floreana Island.  Most of the settlers were political prisoners expelled from mainland Ecuador.  The highlands had the wet and temperate climate and the fertile soil necessary for human agricultural cultivation, although this agricultural settlement never advanced much beyond subsistence living.  This also brought the invasive species of domesticated plants and animals that could drive endemic species to extinction.

Today, there are about 100 people living on Floreana, in the coastal town of Puerto Velasco Ibarra at Black Beach.  My biggest disappointment during our tour was that we did not sail to this town or travel up into the highlands of the island.

Lawson invited Fitzroy and Darwin to dine with him at the settlement in the highlands the next day--September 25.  Thalia Grant and Greg Estes have said that this day was "one of the most significant days of Darwin's visit to Galapagos and, indeed, of the entire voyage of the Beagle" (114).  There are two reasons for this.  First, Lawson had been exploring all the Galapagos Islands for five years, and he imparted much of what he had learned to Darwin--including the observation that the giant tortoises were so different in the different islands, that people familiar with them could identify which island a tortoise belonged to by the form of its body and its shell.  Later, Darwin said that Lawson was the first person to suggest to him that the different islands might have different species distinct to each island.  In his Voyage of the Beagle, he identified this as "the most remarkable feature in the natural history of this archipelago."

The second reason why this dinner with Lawson was so important is that Darwin saw the Floreana Mockingbird for the first time, which playfully flew to their dinner table.  He recognized that this was different from the mockingbirds he had seen on San Cristobal.  He began to collect mockingbird specimens on all four of the islands that he visited.  He did not intentionally collect an island series for any other organism.  Later, writing in his ornithological notebook, about nine months after leaving Galapagos, Darwin saw that if there were different species of mockingbirds for the different islands, and if this were also true for the giant tortoises, as Lawson had told him, this would "undermine the stability of Species."  In The Origin of Species, published 24 years after his visit to Galapagos, the mockingbirds were the only organisms from Galapagos that he mentioned as showing how natural selection could explain the geographic distribution of species in oceanic islands.

In a series of articles written in the early 1980s, Frank Sulloway demonstrated through meticulous research that the Galapagos mockingbirds were far more important in influencing Darwin's thought than were the Galapagos finches (Sulloway 1982a, 1982b, 1983, 1984).  In March of 1837, five months after returning to England, Darwin met with John Gould, who had been examining Darwin's collections from his trip on the Beagle.  Gould identified the mockingbird specimens as three different species, each limited to a specific island.  In his diary, Darwin noted that this was the first time that he began to think that he had found evidence of "transmutation," the transformation of one species into another.

During his voyage, Darwin accepted the claim of the British natural theologians that all species were fixed and created to be perfectly suited to their environments, and that species originated either by being created in their present habitat or by dispersal from various "centers of creation."  It followed from this that endemic species would be found only in unique environments, and similar species would only be found in similar environments.  The Galapagos mockingbirds contradicted this thinking, because the different Galapagos species were endemic to different islands and yet quite similar to mockingbirds on the South American mainland.  This suggested that the endemic Galapagos species had originated from the transmutation of South American species that had migrated to Galapagos.

But while this gave Darwin the idea of natural transmutation of species, it did not give him any idea about the mechanism by which this could have happened.  That second idea came to him in the fall of 1838, when he happened to read Robert Malthus.  It struck him that with a "struggle for existence," "favorable variations would tend to be preserved, and unfavorable ones to be destroyed.  The result of this would be the formation of new species.  Here, then, I had at last got a theory by which to work" (Autobiography, 1959, 120).  For the first time, he had the theory of natural selection.