The Birthday of Abraham Lincoln and Charles Darwin 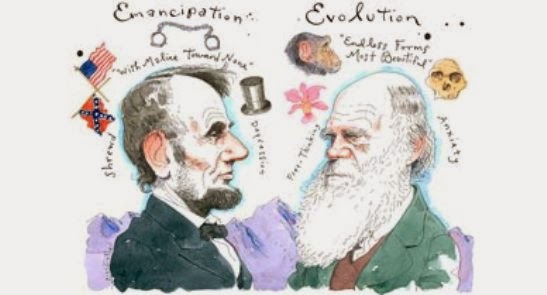 Once again, it's time to celebrate the birthday of Abraham Lincoln and Charles Darwin, who were born on February 12, 1809.

I have commented on some of the many points of comparison for the two in previous posts here and here, which include links to many other posts.

I see at least seven points of similarity between Darwin and Lincoln.

(1) Both saw the universe as governed by natural laws, which included the natural laws for the evolution of life.

(2) Both were accused of denying the Biblical doctrine of Creation.

(3) Both spoke of God as First Cause.

(4) Both appealed to the Bible as a source of moral teaching, even as they also appealed to a natural moral sense independent of Biblical religion.

(5) Both abhorred slavery as immoral.

(6) Both were moral realists.

(7) Both were classical liberals.
Posted by Larry Arnhart at Tuesday, February 11, 2014