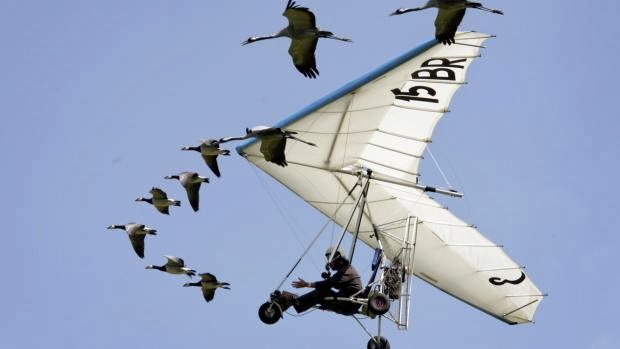 Whooping Cranes Led in Migration by an Ultralight Aircraft


From his biological studies of animal behavior, Aristotle concluded that human beings, ants, bees, wasps, and cranes were political animals by nature (History of Animals, 488a1-14).  Some of these animals, such as bees and cranes, are ruled by a leader (hegemon), while others are not.

It's harder to understand why Aristotle identified cranes as political animals.  But now some recent research suggests that he was right.  Aristotle thought that birds show  their prudence (phronesis) in building nests, in cooperating in rearing and teaching their young, in deceiving predators and prey, and in navigating over long distances (HA, 612b18-620b9).  He thought that cranes show their political prudence in their migration, in that a leader guides their flight path and acts as a guard when they stop (614b19-26).

Some recent studies of the migration of American whooping cranes (Grus Americana) confirm Aristotle's claims about leadership among cranes in their migration.  Some of this research is briefly summarized in an article in the New Scientist.

To keep  the North American whooping cranes from going extinct, conservationists have been rearing them from birth and then introducing them into the wild.  To do this successfully, researchers have dressed as cranes so that the birds imprint on the scientists as their parents, and then the scientists can teach them how to fly south for the winter by leading them with an ultralight aircraft.  The eastern migratory population must fly in the fall from Wisconsin to Florida, and then fly back to Wisconsin in the spring.  After they have been led to Florida in the fall by the scientists, the birds can then can fly back in the spring on their own.

This suggests that they must learn their path of migration from leaders.  Presumably, this requires some interaction between their genetic nature and their social learning.  A recent study in Science (Mueller et al. 2013) tried to elucidate this nature/nurture interaction and the role of leadership in migration.  Here's the abstract for the paper:

"Successful bird migration can depend on individual learning, social learning, and innate navigation programs.  Using 8 years of data on migrating whooping cranes, we were able to partition genetic and socially learned aspects of migration.  Specifically, we analyzed data from a reintroduced population wherein all birds were captive bred and artificially trained by ultralight aircraft on their first lifetime migration.  For subsequent migrations, in which birds fly individually or in groups but without ultralight escort, we found evidence of long-term social learning, but no effect of genetic relatedness on migratory performance.  Social learning from older birds reduced deviations from a straight-line path, with 7 years of experience yielding a 38% improvement in migratory accuracy."


Notice that they are showing the complex interaction between three levels of behavioral causality: innate programs (natural instincts), social learning (cultural traditions), and individual learning (individual cognition).  The older and more experienced cranes can become leaders of migration with the younger and less experienced cranes learning from them.

A similar pattern has been found with homing pigeons, so that individuals with more homing experience become the leaders and those with less the followers (Flack 2012).  There is some evidence from homing pigeons and other animals that this leadership arises not just from greater experience in the leader but also from the leader's individual personality traits (such as boldness and dominance) (Harcourt et al. 2009; King et al. 2009).

Some people insist, however, that this is not politics, and that true politics is uniquely human because it depends on some conceptual understanding of authority that only human beings can have, and that learning the conventions of authority is artificial rather than natural (just as Hobbes argued).  I'll respond to that in my next post.

Flack, Andrea, et al.  2012.  "What Are Leaders Made Of?  The Role of Individual Experience in Determining Leader-Follower Relations in Homing Pigeons."  Animal Behaviour 83: 703-709.