The Biological Roots of Monogamy and Parental Care as Natural Desires

I have argued that the biological roots of these two natural desires arise from the complex interaction of genetic causes, neuroendrocrine circuitry, individual personality, and social life history.  That complex interaction creates such individual and social variability that different individuals will rank those two natural desires in different ways.  In societies that show the "demographic transition," most couples will choose to have only a few children, while investing heavily in each child, because social success requires advanced training and education.  A few individuals will choose--perhaps rightly--never to enter a monogamous marriage and never to care for children.

Now, some recent research has identified for the first time some of the genetic basis for parental care among mammals.  This new research has been published in Nature (Bendesky et al. 2017; Phelps 2017; Zimmer 2017).

Parental care is essential for the survival and reproductive fitness of mammals.  And yet among most mammals (about 95% of species), parental care comes mostly or entirely from the mother, while the father mates promiscuously with other females and provides no paternal care for his offspring.

The oldfield mouse (Peromyscus polionotus) is one of the rare exceptions to this mammalian pattern.  Fathers and mothers are monogamously bonded to one another, and they cooperate in digging burrows and building nests for their pups.  Fathers help in caring for the pups by licking them, keeping them warm, and retrieving them when they fall out of the nest. 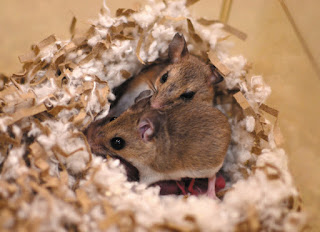 This is very different from their closest living relatives--deer mice (Peromyscus maniculatus)--who are sexually promiscuous rather than monogamous, and among whom fathers provide little or no paternal care of their offspring.

In the wild, deer mice and oldfield mice never interbreed.  But in a laboratory, they will interbreed if a single male and female are put together in a cage, and their hybrid offspring are healthy and fertile.

Hopi Hoekstra (an evolutionary biologist at Harvard University) and her colleagues realized that they could study these hybrid mice to find the genetic causes for the differences in mating and parenting.  They paired five mice from each species to produce 30 hybrids, which then produced 769 pups.  They then measured the parental behaviors of these second-generation of hybrids raising a third-generation of pups.  Some of the second-generation parents showed almost no parental care, like purebred deer mice.  Others showed as much parental care as purebred oldfield mice.

By scanning the DNA of the hybrids, Hoekstra and her colleagues identified twelve stretches of DNA (loci) that were linked to parenting behavior.  Some of these loci influence only a single parenting behavior, such as nest-building.  Others influenced several parenting behaviors at once.  Moreover, some loci were important in fathers but not mothers.

The researchers decided to concentrate on the one locus associated with nest building, which contains 498 genes.  They focused on the one gene that codes for the hormone vasopressin, because this hormone as produced in the hypothalamus of the brain has been previously identified as linked to paternal care.  They discovered that deer mice make three times as much vasopressin in the hypothalamus as do oldfield mice.  So elevated levels of vasopressin seem to suppress paternal behavior.  They confirmed this by injecting vasopressin into the brains of oldfield mice, and as a result of this, the oldfield mice fathers made simple nests more like that of deer mice.

This is a strange result, however, because in previous research with prairie voles, another socially monogamous rodent, it has been shown that higher levels of vasopressin in males increases parental care, which is what I reported in Darwinian Natural Right.  As Steven Phelps suggests in his analysis in Nature, previous studies have examined the release of vasopressin in the medial preoptic area of the hypothalamus, while this new study analyses the release of vasopressin in the paraventricular neurons of the hypothalamus.  Furthermore, as Phelps points out, genetic variation in nest-building is dissociated from the genetic variation in pup-directed behaviors like retrieving and grooming pups.

We should also remember that the effects of male parenting often depend on social life history.  If the father in a biparental species (like California mice) is removed during offspring development, this paternal deprivation impairs the normal development of the cognitive, emotional, and reproductive behavior of the offspring (Bales and Saltzman 2016; Storey and Ziegler 2016).  We also know from Harry Harlow's famous experiments that this is true for monkeys who have been deprived of maternal care (Blum 2002).

We might wonder whether something similar happens with human beings, so that children reared by both parents are generally better off in their development than those deprived of either paternal or maternal care.  We might also wonder whether there is any harm generally to the children raised by same-sex couples, because the children are deprived of either paternal or material care.