Peter Augustine Lawler, 1951-2017: On the Evolutionary Psychology of Individual Liberty and Social Virtue 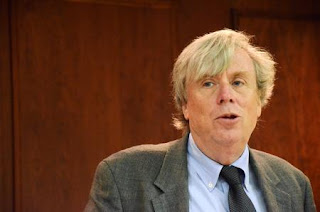 I was saddened to hear of the sudden death of Peter Augustine Lawler at his home in Rome, Georgia, where he was the Dana Professor of Government at Berry College.

Peter combined commitments to an Augustinian Catholic faith, a Heideggerian existentialist philosophy, and a Kirkean conservative politics.  He expressed those commitments in a witty and poetic style of improvisational speaking and writing, often with references to the popular culture of television shows, movies, and novels.  Much of his speaking and writing was done under the sponsorship of the Intercollegiate Studies Institute.

The one author who most influenced Peter's thinking was Walker Percy.  And of Percy's writings, Lost in the Cosmos was the most important.  Peter's themes of human beings as "aliens" in the universe, wondering wanderers, haunted by love and death were all from Percy, and originally from Heidegger.

Peter and I debated about the adequacy of Darwinian science for supporting traditionalist conservatism or classical liberalism.  Ultimately, our debate turned on the question of whether that science can fully explain human nature.  I generally argued that it can.  Peter generally argued that Darwinian science provides at best only a partial explanation: it goes a long way in explaining our nature as social animals, but it fails to explain our nature as individual persons who want to be the center of the universe.  As he often said, it's all about ME!  (In all of this, Peter was restating themes from Percy's Lost in the Cosmos.)

As often happens with friendly debaters, we began to find more and more common ground.  I now see that common ground as a Darwinian account of human nature that supports a fusion of traditionalist conservatism and classical liberalism.

I use the word "fusion" here to evoke the memory of Frank Meyer, who argued that the debate between American libertarians and conservatives was misconceived, because what was needed was a "fusion" of both positions.  If we properly distinguish state and society, he claimed, we can see that the libertarians (or classical liberals) are right in asserting that the purpose of the state is to secure individual liberty, while the conservatives are also right in asserting that the purpose of society is to promote social virtue.

Peter and I moved towards a fusion of classical liberalism and liberal conservatism founded on a Darwinian science of human nature.

I saw hints of this in Peter's chapter in Stephen Dilley's book Darwinian Evolution and Classical Liberalism.  But I saw it even more clearly in one of Peter's articles in The New Atlantis--"Moderately Socially Conservative Darwinians".  The editorial note above this article captured the theme of Peter's article in one sentence: "Peter Augustine Lawler argues that evolutionary psychology, rightly understood, reinforces the conservative lesson that we are not merely autonomous  individuals but also social and relational beings."

I have identified evolutionary psychologist Jonathan Haidt as a Darwinian conservative., who shows how classical liberalism is rooted in our evolved moral psychology.  In his New Atlantis article, Peter came close to the same conclusion: "To be effective, social cooperation cannot simply be the product of calculation or self-interest rightly understood (as the Lockeans would have it); but it also cannot be imposed in a way that would abolish individual choice or responsibility (as in the Republic).  For all his sympathy with social conservatism and understanding of the importance of relationships for morality, politically speaking Haidt is more of a libertarian.  He's the increasingly rare kind of libertarian that idealizes not the liberated individual who chooses to design himself from an ever-expanding menu of choice, but rather the intelligently eusocial animal who takes responsibility for his own relationships."

Peter added: "On his moderately socially conservative view, both 'libertarians (who sacralize liberty)' and 'social conservatives (who sacralize certain institutions and traditions)' reliably espouse partly correct views of who we are."  This is what I see as the fusion of libertarianism and conservatism founded on a Darwinian science of human nature.

Turning to E. O. Wilson's The Social Conquest of Earth, Peter was impressed by what Wilson said about evolved human nature as showing the tension between individual selection and group selection, which Peter saw as a Darwinian intimation of the tense dualism of human nature as both relational and personal that is captured in Christian theology:


"An unexpected way to unite the Darwinian and Cartesian perspectives can be found in Christian theology, as expressed in the thought of the lately abdicated philosopher-pope Benedict XVI.  The Darwinians are right that we are relational beings, the Lockeans are right that we are personal beings.  We can only be personal through being relational.  And that is the point of the Christian doctrine of the Trinity.  We don't lose ourselves in God, just as we don't lose ourselves in our relationships with persons made in His image.  We retain our personal identity; being personal is hardwired, so to speak, in the very structure of being itself.  And we are made to be in relationships without becoming mere parts; each of us is a relational whole by nature.  It is a mistake to believe, as the Cartesians do, that we have to win our personal freedom against an impersonal nature, because we are, in fact, free persons by nature."

And yet Peter still held to his often repeated claim that Darwinian science cannot account for the human sense of individual personal dignity: "Although evolutionary psychologists try to reach the same political conclusions as people devoted to the human rights of individuals liberated from nature, evolutionary science offers no real evidence that could ground our sense of personal significance apart from the requirements of the group and ultimately the species."

This leads to Peter's complaint, in his chapter in Dilley's book, that "Darwin, from a Lockean view, turns individuals into species fodder" (59).

But doesn't the Darwinian account in Wilson's book of the evolved tension between individual selection and group selection convey the human dualism of personal individuality and relational sociality?  Locke captures this tension by affirming both individual freedom based in self-ownership and social bonding based in social instincts.  (Strangely, Peter chose to ignore Locke's emphasis on the social bonding of human biological nature, because Peter was unduly influenced by Leo Strauss's distorted reading of Locke as teaching an asocial individualism in a "joyless quest for joy.")  Evolutionary neuroscience now supports this Lockean psychology: we can see that our mammalian neuroanatomy has evolved so that we naturally care for the survival and well-being both of ourselves and of our families and social partners.

Unlike the other animals, human beings really do insist: it's all about ME!  That means, according to Peter, that none of us can imagine or accept that we must die, that our personal existence can endure only for one human lifetime.  We all fear death and long for immortality, because we all want to be known and loved forever as the unique persons that we are.

By contrast, I have suggested that fearing death and longing for immortality shows a foolish refusal to see the goodness in the enduring but temporary life that we enjoy for as long as we live.  If we could exist as ageless bodies, we would actually be dead.  As I have said in another post, Wallace Stevens was right: Death is the mother of beauty.

This question--whether the goodness of our human lives depends on each of us having personal immortality--is one of those deep questions that we wrestle with in the natural and voluntary associations of our society--in our families, friendships, schools, and religious organizations.  A liberal state secures the peace and liberty that allow us to ponder those questions with one another, but without any coercive enforcement of any particular answers to those questions.

Perhaps the deepest emotional attitude supporting religion is the feeling that my life has no meaning or purpose if I am not a creature of God who loves me and cares for me and will give me eternal life. I cannot bear the thought that my appearance in this universe was an accident, the product of cosmic causes that have no special purpose in mind, and that when I die, the world will go on without me. How can my life matter--really matter--if it's not all about ME? This is the thought that moves existentialist Christians like Lawler who say that Darwinian science cannot explain everything if it cannot give cosmic meaning to the life of human beings as unique persons who don't want to die. But as Rebecca Goldstein indicates (in her philosophical novel 36 Arguments for the Existence of God), this shows the Fallacy of Wishful Thinking. Wishing for something doesn't make it so, even when the wish expresses an anguished human longing. If there's no good reason to believe that it's all about ME, then my wish that it should be so is unwarranted narcissism. If I undergo an existential crisis as I seek the cosmic reason for my personal existence--why am I here? what am I here for?--there may be no reason, because it might be that my personal existence is ultimately just a contingency of the universe.And yet, even as Goldstein reaches this conclusion, she gives her reader a novel that suggests that most human beings will never accept this, and so they will turn from reason to religion. Even those few who understand most fully the fallaciousness of the transcendent longings of human beings might feel compelled to yield to those longings by an emotional necessity that overpowers rational necessity.

Now that he has died, Peter finally knows--or doesn't know--that he will live forever, and that it really is all about HIM.
Posted by Larry Arnhart at Wednesday, May 24, 2017

Now that he has died, Peter finally knows--or doesn't know--that he will live forever.

Larry nice remembrance of Peter, thanks.

Fascinating article. Your delineation of the state and society is fascinating.