Slaves Did Not Abolish Slavery 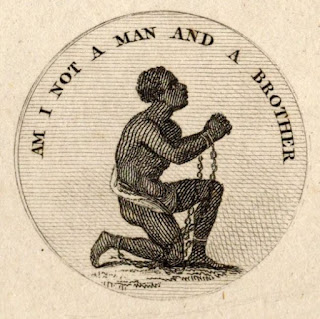 This is the seal of the Committee for the Abolition of the Slave Trade, founded in 1787 by the English abolitionist Thomas Clarkson.  It was widely replicated as a medallion in different forms.  Many historians today criticize this image as insulting to black slaves by presenting them as supplicants begging for the help of abolitionists rather than as active, self-assertive people who could emancipate themselves through their aggressive resistance to slavery. 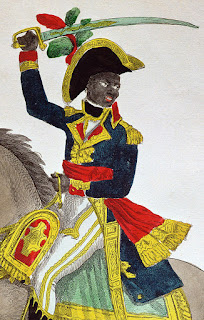 Toussaint Louverture, the "Black Spartacus" who led the Haitian slave rebellion, is the best image for slaves emancipating themselves.

In my chapter on slavery in Darwinian Natural Right, I compared human slavery and ant slavery.  The similarities suggest that both for human beings and for ants, slavery is a form of social parasitism in which slavemakers exploit their slaves through coercion and manipulation.  The differences suggest that human beings resist the exploitation of slavery because it violates their natural moral sense.  Unlike slave ants, human slaves will resist exploitation and demand social cooperation based on kinship and reciprocity.  Actually, as I have indicated in some blog posts (here and here), some slave ants have been observed rebelling by killing the offspring of the slavemaking ants.

In a series of blog posts (here, here, here, here, and here), I have argued that the natural resistance of slaves to their enslavement illustrates the general principle that might makes rights--that natural rights emerge in human history as those conditions for human right that cannot be denied without eventually provoking a natural human tendency to violent resistance against exploitation.

Recently, however, I have been reconsidering that line of thought after studying Joao Pedro Marques's argument that the abolition of slavery in the 19th century was not generally caused by slave revolts, with the one possible exception being the Haitian Revolution, which seems to be the one and only case in all of human history of a large-scale slave rebellion that led to the abolition of slavery.  Marques's book has been published in Who Abolished Slavery?, edited by Seymour Drescher and Pieter Emmer (New York: Berghahn Books, 2010), which includes commentaries by other scholars and Marques's response.

Marques's argues that slaves did not in fact abolish slavery through their rebellion, and that the abolition of slavery was the result of the ideology of abolitionism that appeared for the first time at the end of the 18th century.

He makes two kinds of arguments for this conclusion--a logical argument and an empirical argument.  His logical argument is that a constant cannot explain a variable: slaves have resisted their enslavement for thousands of years--through escape or rebellion--but this slave resistance never led to the abolition of the system of slavery, as occurred in the 19th century.  So there must be something new to explain this, and that something new is the moral and political idea of abolishing slavery that arose in the European Enlightenment sometime after 1750.  Throughout the history of slavery, slaves have shown that they don't want to be enslaved, and so they have looked for ways to emancipate themselves and others close to them.  But prior to 1750, this desire of individuals for their own emancipation was never a desire for the total emancipation of all human beings.  Slaves who act to liberate themselves but otherwise accept the slavery of others are not showing themselves to be anti-slavery or abolitionist.  In fact, emancipated slaves have often become slave masters themselves, thus showing that they accept the system of slavery, although they prefer not to be enslaved themselves.

Many historians find this to be a disturbing conclusion, because it denies the heroic image of slaves as emancipating themselves and all humanity from slavery by their courageous struggle.  For example, Ira Berlin, one of the leading historians of American slavery, claims, in his recent book The Long Emancipation: The Demise of Slavery in the United States (Harvard University Press, 2015), that Marques is completely wrong, because American black slaves really were their own emancipators in abolishing slavery.  Oddly, however, while Berlin quickly rejects Marques's position in the Introduction to The Long Emancipation, Berlin does not, in the rest of his book, respond to Marques's arguments, and thus Berlin leaves his readers wondering whether he can refute Marques.

Berlin is silent about Marques's logical argument that since slave resistance has occurred throughout the history of slavery for thousands of years without causing slavery to be abolished, slave resistance cannot be a sufficient cause for the abolition of slavery in the 19th century.  Berlin says that American slavery proved to be a "leaky vessel," because slaves wanted out of slavery, and they found many ways to escape--by running away, by buying their freedom, by persuading their owners to liberate them, and by legal emancipation.  But then Berlin admits that "leaks did not destroy slavery" (13-15).  And he does not observe that slavery has always been a "leaky vessel," and that this never led to complete abolition until the 19th century.

Berlin notes that many slaves "sought freedom for themselves and cared little or nothing for their fellows still in bondage," and that some of the freed slaves even became black slaveowners (35).  But he does not notice that this was one of Marques's arguments for why slave resistance could not be the cause of abolition.

Berlin insists that slave rebellions in the United States were crucial for the movement to abolition.  But he says nothing about Marques's observation that slave rebellions were too rare to explain abolition.  From 1800 to 1831, there were only two medium-sized slave rebellions that failed.  In New Orleans in 1811, 200 slave rebels were killed by an armed force.  In Virginia in 1831, Nat Turner's Rebellion was suppressed in a few hours.  From 1832 to 1865, there were no slave revolts at all.  Most amazingly, even during the Civil War, when the turbulence of the war created a great opportunity for slaves in the South to launch an insurrection, they failed to do so.  Individual slaves did run away, seeking the protection of Union troops, and many became Union soldiers, but most of the four million slaves in the South did nothing to initiate a general uprising, although many people North and South expected a slave insurrection.  Marques concludes that "the level of rebelliousness was generally low" (46).

Not only does Berlin fail to refute Marques's arguments, Berlin even restates Marques's assessment of slave psychology without admitting that he has do so.  In one long passage, Berlin writes:


"Collaborators were the least of the many problems stemming from black indifference to black freedom struggles.  The very circumstances that stoked black opposition to slavery often impeded the ability of black people to work in support of abolition.  Acting from the same bedrock opposition to slavery, slave and free black protestors might well settle for less, as they confronted the brutal on-the-ground realities of the slave masters' power.  While malingering, tool breaking, flight, arson, sabotage, poisonings, and rebellion spoke of the desire to smash the chains of bondage, most slaves grudgingly accepted--and sometimes welcomed--improvements in their lives in lieu of the risks entailed in reaching for complete freedom. . . . Faced with unpleasant choices, the vast majority--judging rebellion to be futile and perhaps suicidal--found an accommodation that would ameliorate slavery's harsh conditions and open a more certain path to a better life, at least in the short run.  Why risk all, when a small gain could be safely achieved?"

"Enslaved men and women hated their confinement and sought every opportunity to break the shackles that bound them, but opposition to their own enslavement--or even the enslavement of others--did not automatically make them abolitionists.  For much of their history--indeed, for much of human history--the notion of a world purged of slavery was simply unimaginable.  Abolition, like any other social movement, was rooted in history and confined in time and space.  Prior to the American Revolution and its ideology of universal equality, there were few movements to contemplate, let alone join."

"Even as the notion of a slaveless world slowly emerged at the end of the eighteenth century, not all slaves embraced it, either because they judged it--as did most Americans--theoretically unlikely or because, practically, they could not fit it into their understanding of how the world worked.  Many slaves, carefully calculating how they might best improve their own condition, stood at their master's side and, in some cases, gained their freedom by informing on slave conspirators, assisting in the capture of slave fugitives, and serving as their owner's ears in the slave quarters." (35-37).

Through most of our evolutionary history as hunter-gatherers, in which our human nature was shaped, slavery did not exist, and human adults lived as free and equal individuals.  But then with the establishment of agrarian societies and formal bureaucratic governments, slavery arose and became so deeply established that a "slaveless world" seemed so unimaginable that even while slaves sought every opportunity to liberate themselves, they could not conceive of a world without some being enslaved to others.  It was not until the seventeenth and eighteenth centuries that the Liberal Enlightenment--from John Locke to Adam Smith--introduced the rhetoric of bourgeois equality and liberty that was expressed in the Declaration of Independence, which gradually, in the nineteenth century, led to the abolition of slavery, which was a return to the equality and liberty of the evolutionary state of nature.

That evolutionary anthropology supports this Lockean and Smithian history has been the theme of some previous posts (here and here).

You've got your history wrong. With the possible exception of the Khoisan (who are truly different in so many ways, and probably not H. sapiens), hunter-gatherers did capture and exploit slaves. American Indian history, especially the plains horse culture, is replete with such examples. Women and children were favored, because they can be controlled relatively easily.

Can you give me a citation for that? Chiefdoms had slavery. But I would be surprised if any pure foraging bands had slavery.

Are there any examples, outside the Christian (or if you prefer, liberal post-Christian) West, of a people who had slavery but then abolished it for moral reasons?

Your question points to the puzzle of slavery in Christendom. On the one hand, the abolitionist movement began in the middle of the 18th century in the Christian West, and many of its leaders were devout Christians. On the other hand, the Bible never condemns slavery, and slavery was practiced in Christendom for thousands of years. It was easy for the proslavery Christians in the American South to quote the Bible as supporting slavery. Consequently, as Mark Noll has noted, the Civil War became a theological crisis for Christians, because this great moral question was not resolved by the Bible. I have written about this in a series of blog posts, including one on February 26, 2016, which includes links to the others.