Thinking About Galapagos (5): FitzRoy and Darwin 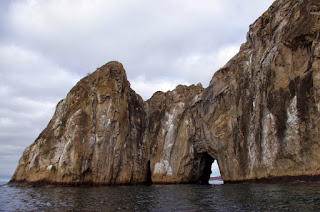 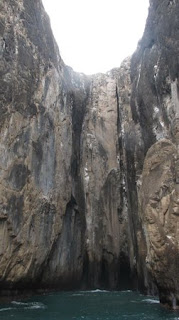 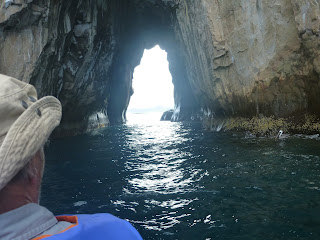 On the morning of Day 4 (January 31), we were on the northwest coast of San Cristobal at Cerro Brujo, a large tuff cone that has eroded to create caves and a tunnel.  A tuff cone is created by volcanic magma mixing with sea water, and it's a form of compacted volcanic ash.  We navigated around the cone in our panga, exploring some if its magnificent rock formations.

This was one of the first areas of the Galapagos explored by Captain Robert FitzRoy and Darwin.  Fitzroy was educated in science, and he collected fossils and kept a journal that was the basis for his book on the voyages of the Beagle, which was published along with Darwin's book.

In the afternoon, we hiked over Punta Pitt on the northeastern tip of San Cristobal.  During the hike, Xavier, our naturalist guide, talked about how Darwin had been chosen by Captain FitzRoy to join him on the Beagle during its voyage around the world (from December of 1831 to October of 1836), primarily for the purpose of surveying the coasts of South America for the British Navy.

In 1828, the Beagle had been on a previous surveying trip around South America.  The surveying duties along the storm-tossed coastlines of Tierra del Fuego were so depressing for Pringle Stokes, the Captain, that he wrote in his logbook: "The soul of man dies in him."  He then put a pistol to his head and killed himself.  Fitzroy was appointed to take his place as Captain.  When he got his assignment in 1831 to do another surveying trip to South America, FitzRoy decided that he needed to have the company of an educated gentleman in his cabin, with whom he could converse, and thus avoid the gloomy fate of the previous captain. 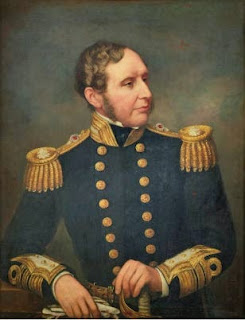 
FitzRoy interviewed Darwin, who was only 22 years old.  Since he believed that he could tell a man's character by the shape of his face, FitzRoy was disturbed by the bad shape of Darwin's nose.  But later he agreed to accept him.  In Darwin's Autobiography, Darwin observed "I think he was afterwards well-satisfied that my nose had spoken falsely."  Darwin's trip was paid for by his father.  Once on the boat, Darwin identified himself as the ship's naturalist.  FitzRoy and Darwin became good friends during their five year voyage.

Xavier told us this story.  But I was surprised that he did not tell us the rest of the story, and particularly FitzRoy's later attack on Darwin's theory of evolution as an assault on Biblical creationism.  So here, again, as I have suggested previously, it seems that the Galapagos naturalist guides steer away from any discussion of the creationist-evolution debate.

During their five years together on the Beagle, Darwin and Fitzroy did not argue about creationism and evolution, because Darwin did not develop his evolutionary theory of the origin of species until years after his return to England.  But they did argue about other things.  In his Autobiography, Darwin remembered a tempestuous argument over slavery:


"Early in the voyage at Bahia in Brazil, he defended and praised slavery, which I abominated, and told me that he had just visited a great slave-owner, who had called up many of his slaves and asked them whether they were happy, and whether they wished to be free, and all answered 'No.'  I then asked him, perhaps with a sneer, whether he thought that the answers of slaves in the presence of their master was worth anything.  This made him excessively angry, and he said that as I doubted his word, we could not live any longer together."

Later, after a few hours, Fitz-Roy apologized to him. But the angry disagreement that began in 1859 was never settled.

When The Origin of Species was published in 1859, Darwin mailed out copies to his friends, including FitzRoy.  Fitzroy's letter in response was harsh: "My dear old friend, I, at least, cannot find anything 'ennobling' in the thought of being a descendent of even the most ancient Ape."

In June of 1860, at the famous debate over Darwin's book between Thomas Huxley and Samuel Wilberforce, organized by the British Association for the Advancement of Science, FitzRoy was in the audience.  He waved a copy of the Bible over his head, and shouted that he "often expostulated with his old comrade of the Beagle for entertaining views which were contradictory to the first chapter of Genesis." He expressed his regret that he had helped Darwin gather some of the facts that Darwin was now using to support his blasphemous theory.

In his Autobiography, Darwin wrote about FitzRoy: "He was afterwards very indignant with me for having published so unorthodox a book (for he became very religious) as the Origin of Species."  Darwin also reported that while on the Beagle, FitzRoy was occasionally near to insanity.  Later in life, he became deeply depressed by his financial problems and by the failure of his efforts at supporting Christian missionary activity in Tierra del Fuego: the first missionaries starved to death, and then later ones were massacred by Fuegians who turned against the Christians and reverted to their aboriginal ways.

In April of 1865, FitzRoy committed suicide by cutting his throat with a razor.  So he finally met the end that he had feared thirty years earlier on the Beagle.