Thinking About Galapagos (4): A Baconian Mastery of Nature for a Darwinian Contemplative Life

Hiking on South Plaza Island on Day 3 of our trip, we saw the over 500 cacti planted on this small island by the Charles Darwin Research Station (CDRS).  They are protected by fencing.  This was done because feral goals had eaten down most of the cacti on the island.  Now that the goats have been eradicated--by being shot--cacti can grow again, so that the island is restored to its earlier state.

In Wildlife of the Galapagos, by Julian Fitter, Daniel Fitter, and David Hosking, it is said that "goats are, after man, the most destructive animals on the planet" (235).  In 1965, Miguel Castro, the conservation officer of the CDRS, started the first systematic goat eradication program, starting with the island of Santa Fe.  Land iguanas and giant tortoises can be driven to extinction by goats eating up the vegetation they need.  Later, in the afternoon, we sailed to Barrington Bay on Santa Fe and saw the restored island as it had recovered after the goats had all been killed by 1975.  One sign of success is the Santa Fe land iguana found only on Santa Fe. 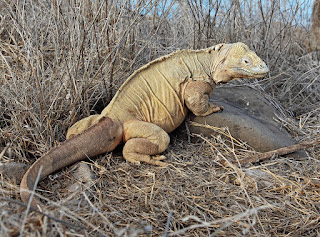 Some clever strategy has been required to kill the goats, through sharpshooting from helicopters.  Even when almost all the goats are killed on an island, a few individuals can escape the hunters.  To track these down, on the island of Pinta, the hunters have deployed what they call Judas goats and Mata Hari goats.  If a goat is fitted with a radio collar and released, its natural social instinct is to seek out other goats, thus leading the hunters to their prey.  The most effective technique is to use male goats that have been rendered sterile (Judas goats) or female goats that have been sterilized and chemically treated to simulate a state of permanent estrus (the Mata Hari goat).  Over 40,000 goats were shot in the 1970s alone.  There are now only a few feral goats left in small populations on San Cristobal, Santa Cruz, and southern Isabela.

Once the goats have been eradicated from an island, the scientists and workers at CDRS can plant native vegetation or reintroduce native animals, such as giant tortoises, that have been born and reared in captivity.

As I have noted in some previous posts, I see this as an example of Francis Bacon's project for using science to master nature for human benefit.  Some critics of Bacon's project have complained that this turns science or philosophy away from its traditional devotion to the theoretical life--knowledge of nature for its own sake--to a purely technological concern for the practical manipulation of nature for human uses.  But Bacon himself, particularly in his Essays, argued that his new science would be good not only as a means for its practical benefits, but also as an end in itself for the pure pleasure of understanding.  To know the truth about nature is satisfying in itself for those who choose a contemplative life, because such knowledge is "the sovereign good of human nature" (Bacon 2002, p. 342).

Darwin's primary argument for evolution by natural selection was to show its similarity to evolution by the artificial selection of plants and animals by human breeders.  In his "Abstract" of his theory, which he sent to Asa Gray in 1857, Darwin wrote: "It is wonderful what the principle of Selection by Man, that is the picking out of individuals with any desired quality, & breeding from them, & again picking out, can do. . . . There must have been, also, a kind of unconscious selection from the most ancient times namely in the preservation of the individual animals (without any thought of their offspring) most useful to each race of man in his particular circumstances. . . . Man by this power of accumulating variations adapts living beings to his wants--may be said to make the wool of one sheep good for carpet & another for cloth etc."  Similarly, "I think it can be shown that there is such an unerring power at work on natural selection (the title of my Book), which selects exclusively for the good of each organic being."

For almost two hundred years, whalers and farmers in Galapagos have artificially selected plants and animals to satisfy human desires.  So, for example, giant tortoises have been almost driven to extinction by human beings who saw them only as good for eating, and by the human introduction of domesticated animals--like goats--that have made the environment inhospitable to giant tortoises and other endemic species.  But now human beings under the influence of Darwin's science are artificially selecting the endemic plants and animals of Galapagos to preserve them by eradicating invasive species, because now human beings see these endemic species as good for thinking.

Motivated by Darwin's Baconian science, conservationists and scientists in Galapagos and ecotourists who visit Galapagos want to preserve endemic species in a hospitable environment so that we can observe and study them for what they teach us about natural evolution, which satisfies our natural desire for understanding.

This Baconian understanding of science as a practical activity in the service of theoretical understanding of nature is manifest in the Galapagos, where Darwinian scientists have supervised the conservation of the islands for study by scientists and for instructing people in Darwinian evolutionary science.  In 1935, the centennial of Darwin's arrival in Galapagos, American travel writer Victor Von Hagel travelled to Galapagos with a replica of the bust of Darwin at the American Museum of Natural History.  He wanted to plant it at the site on San Cristobal where Darwin first stepped off the Beagle onto a Galapagos island.  The bust is now displayed in a park on the grounds of the Ecuadorian naval base in Puerto Baquerizo Moreno. 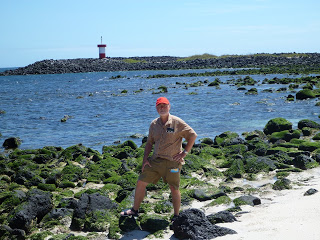 The Site of Darwin's First Landing in the Galapagos, September 16, 1835 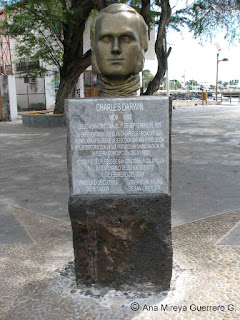 There is a little myth-making at work here.  It is not true that the whole theory of evolution by natural selection came to Darwin's mind while he was in the Galapagos Islands.  But the exaggerated story of the importance of Galapagos for Darwin's thinking--particularly, the finches--has been crucial for the rhetorical branding of Galapagos conservation and ecotourism with Darwin's name.

Nevertheless, there is some truth to the myth of Galapagos as the home of Darwinian evolution.  Within a few years after his return to England, Darwin's notes show that he slowly began to recognize the importance of what he had seen in Galapagos.  In the second edition of The Voyage of the Beagle (published in 1845), he gave his first published hint in his chapter on Galapagos that he was thinking about the evolutionary transmutation of species: "The natural history of these islands is eminently curious, and well deserves attention. . . . both in space and time, we seem to be brought somewhat near to that great fact--that mystery of mysteries--the first appearance of new beings on earth."  Moreover, it is certainly true, that since Darwin's death, no other spot on Earth has been as intensively studied as a natural laboratory for Darwinian evolution.

In 1935, Von Hagen wrote about "the need for conserving the irreplaceable natural phenomena of the archipelago, and to save from extinction this living laboratory for the study of evolutionary processes."  This idea of Galapagos as the "living laboratory" of evolution is a powerful theme.

In the 1950s, evolutionary scientists like Julian Huxley (the first director general of UNESCO) argued for protecting the Galapagos Islands.  In 1959, the centennial of the publication of The Origin of Species, there were many events to commemorate Darwin's science and its connection to Galapagos.  In that year, Ecuador passed a law declaring the uninhabited 97% of Galapagos Ecuador's first national park.  Huxley declared that this would serve "the preservation of all sources of pure wonder and delight" as a natural human need.

The GNPS has designated 92 visitor sites in Galapagos.  Visitors must be accompanied by naturalist guides who have been trained and certified by the GNPS.  The scheduling of visits by the tour boats must be approved by the GNPS so that only a few people at a time are visiting a site.

Moreover, there also seems to be an implicit assumption in what the guides say that evolutionary science explains everything--that nothing on Earth, or in the whole Universe, makes sense except in the light of Darwinian evolutionary science.  Clearly, the global ecotourists who come to Galapagos are receptive to this message.

I have also noticed that the guides are remarkably silent about the creation-evolution debate, and about the claim of some religious believers that nothing makes sense except in the light of God's creation of everything in the beginning.

The Reason-Revelation Debate has been settled, it seems, in favor of Darwinian Reason and against Biblical Revelation.
Posted by Larry Arnhart at Thursday, February 23, 2017

It wasn't G.G. Simpson; it was another of the architects of the Modern Synthesis, Theodosius Dobzhansky, who said, "Nothing in biology makes sense except in the light of evolution." From wikipedia:

"Nothing in Biology Makes Sense Except in the Light of Evolution" is a 1973 essay by the evolutionary biologist and Eastern Orthodox Christian Theodosius Dobzhansky, criticising anti-evolution creationism and espousing theistic evolution. The essay was first published in American Biology Teacher in 1973.[1]

Dobzhansky first used the title statement, in a slight variation, in a 1964 presidential address to the American Society of Zoologists, "Biology, Molecular and Organismic", to assert the importance of organismic biology in response to the challenge of the rising field of molecular biology.[2] The term "light of evolution"—or sub specie evolutionis—had been used earlier by the Jesuit priest Pierre Teilhard de Chardin and then by the biologist Julian Huxley.[3]

Thanks, Roger, for the correction.

In The Lagoon: How Aristotle Invented Science (Viking, 2014), Armand Marie Leroi writes, "Theodosius Dobzhansky famously remarked, and evolutionary biologists endlessly repeat, that 'nothing in biology makes sense except in the light of evolution.' The sentiment is a fine and ringing one, always handy if there's a Creationist about, but it isn't really true, for quite a lot does" (p. 299).

Leroi is a charming writer and it's a very interesting book. Since you did a lot of work on Aristotle, I thought you might enjoy it.