Thinking About Galapagos (2): Islands of Life 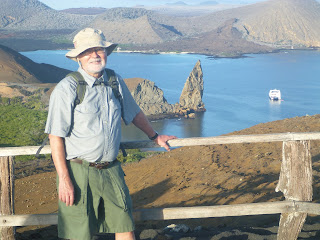 A Panoramic View of Pinnacle Point on Bartholomew Island


On Day 1 (January 28), my wife and I landed at the Baltra airport.  There we met the five other passengers for our cruise on the Cormorant (a German couple from Switzerland, a Canadian couple from Montreal, and an American living in Ecuador) and our naturalist guide (Xavier).  On the boat, we had lunch, and then we navigated to our first site for hiking--Bachas Beach on Santa Cruz island, where we saw sea turtle nesting sites and American Flamingoes in the lagoons behind the beaches.

On Day 2 (January 29), we navigated to Bartholomew Island in the morning for hiking to the top of the island, and then snorkeling at the foot of Pinnacle Point to see sharks, rays, and the Galapagos penguins.  In the afternoon, we moved to Sullivan Bay on Santiago Island for hiking on a lava field.

I soon found myself thinking about one idea that stayed with me throughout this trip--every one of these islands is a world unto itself that is geologically, biologically, and culturally unique because of its unique natural history, and thus the Galapagos Islands make it easier to see how all of life could have evolved on islands.

This idea was nicely stated by Loren Eiseley in an essay on the Galapagos: "It is the working of such mysterious principles as adaptive radiation and selection which binds this assemblage of extraordinary plants and animals together and relates even the story of man to island tortoises and flightless birds. We are all, in fact, the product of islands, visible or invisible. At some point in the fossil past, isolation and mutation have diverted each bit of life down some solitary road from which there is no turning back."

After all, the Earth itself is an island in the Cosmos, with a unique natural history that has made it the only place, as far as we know, in which life has emerged.  And even if we do someday discover life on another island planet in the universe, we can expect that it will have forms of life unlike those on Earth, because it will have its own unique history shaped by contingent events and circumstances.

An example of the unique geological and biological history of Santiago Island is a large lava flow at Sullivan Bay created by a volcanic eruption in 1889.  There have been more recent lava flows--the most recent was in May of 2015 from Wolf volcano on Isabela Island.  But this lava field on Sullivan Bay is the most recent lava flow in Galapagos that is open to visitors.  So it's an opportunity to see how these islands originate from volcanic eruptions and also to see how life originates on barren lava. 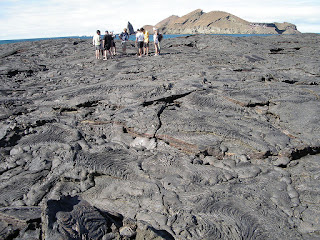 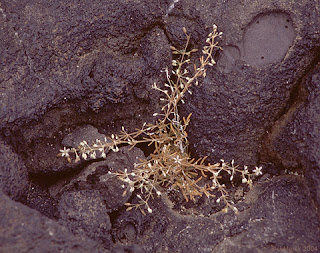 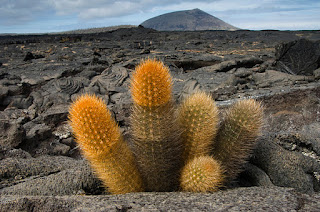 
Looking over the massive expanse of bare lava, it's hard to imagine how life could ever take root here.  And yet after about 45 minutes of hiking, we saw Mollugo crockeri, which is the first plant colonizer on this lava, and this species is found only on Santiago Island and no where else in the world.  Then, after an hour of hiking, we saw a Lava Cactus, which is also endemic to Galapagos, and found only on barren lava flows.  Mollugo is a perennial herb.  It's flowers are white with five petals.  As the leaves die, they eventually create soil, although it takes over 5,000 years to build a layer of soil on lava.

So here we see the origins of plant life on the volcanic islands of Galapagos.  We must assume, however, that these plants unique to Galapagos--and in the case of Mollugo crockeri, unique to Santiago Island--evolved from ancient ancestral species that found their way to Galapagos from the South American continent.  Critics of Darwinian science might object that this is only a speculative assumption--a "just-so story" unsupported by empirical evidence.

And yet Darwin treated this as a testable theory.  First, we can predict that there must be plant species on the mainland that are similar enough to these species endemic to Galapagos as to be plausible candidates for the evolutionary ancestors of these plants.  Second, we can predict that there must be some way for the seeds of these ancestral plants to reach the Galapagos Islands, which are 600 miles from the mainland--either by being blown through the air, by floating on the ocean currents, or by being carried through the air by birds, or by being brought to the islands by humans.

In his Origin of Species, Darwin has two chapters on "Geographical Distribution," in which he reports the results of many years of experimentation at his home in Down to test the possible ways that seeds might have travelled from a mainland continent to distant oceanic islands like Galapagos. (I have written a post on my visit to Darwin's Down House in 2009.)  He put the seeds of eighty-seven different plant species in salt-water for weeks at a time, and then he planted them to see if they would germinate.  Most of them did germinate.  He noted that many seeds sank in water.  But when plants were dried, some of them would float.  He then checked the average speed of currents in the Atlantic Ocean (from A. K. Johnson's Physical Atlas), and he calculated that the seeds of 14 out of every 100 plant species belonging to one country could float across 924 miles of sea to another country.  He also tested the possibility that seeds could be carried across an ocean in the carcass of a dead animal.  He fed a pigeon on seeds, killed the pigeon, and then floated its body on salty water for a month.  He then dissected the body, planted the seeds, and discovered that most of them germinated.

This illustrates how evolutionary theory can be experimentally tested.  By contrast, the proponents of "scientific creationism" and "intelligent design theory" never engage in the experimental testing of their theories.  Thousands of scientists have gone to Galapagos to empirically study the evolution of species in the islands.  Much of this research has been supported by the Charles Darwin Research Station in Puerto Ayora on Santa Cruz island.  But there is no Creationist (or Intelligent Design) Research Station supporting empirical research in Galapagos, because Creationism and Intelligent Design Theory are not empirically testable theories.

And yet, while Creationism and Intelligent Design Theory have no positive content as testable theories of the origin of species, they do have some negative content insofar as they criticize evolutionary science for its intellectual weaknesses, which forces evolutionary scientists to strengthened their reasoning.

So, for example, creationists and intelligent design proponents have criticized evolutionary theory for failing to become an empirically proven science, because no scientist has ever directly observed the evolution of new species from ancestral species.  We can directly observe the Mollugo plant and the Lava Cactus growing on the lava field in Sullivan Bay.  We can see that these plants are endemic to Galapagos.  We can see that they are similar to plants on the mainland of South America.  And we can test the possibility that seeds from the mainland could find their way to Galapagos.  But we cannot see the evolution of one plant species into a new plant species on Galapagos.

Now, of course, there is at least one evolutionary research project on Galapagos that has become famous as showing "evolution in action"--the study of the history of finches on the Daphne Major island by Peter and Rosemary Grant.  And yet, despite the way their work is reported in high school and college biology textbooks, there is some dispute as to whether they have really seen the macroevolution of one species into another.  I will return to this in a later post.

As I indicated in my previous posts on my first trip to Galapagos in 2013, I have been surprised that all of the ecotourists and the naturalist guides that I have met in Galapagos assume that the truth of evolutionary science has been proven, and that much of the proof is found in Galapagos.  And consequently, Creationism and Intelligent Design Theory seem ridiculous to them.

That impression was confirmed the night of our second day, while the Cormorant was anchored in Sullivan Bay, when all of the passengers stayed up late drinking some good wine and talking about the evolution debate.  The conversation included Kjetil Haugan, the Norwegian businessman who owns Haugan Cruises, which operates the Cormorant and two other yachts cruising Galapagos.  He travelled with us for a few days, on his way to a business meeting in the islands.  The Europeans and the Canadians were completely baffled that Americans were still debating evolution.  I explained my debates with creationists and intelligent design proponents (particularly those at the Discovery Institute).  And I also explained that many American politicians (like Vice President Pence and Ben Carson) were vocal opponents of evolutionary science.  All of these people on the boat thought that the Galapagos Islands provided irrefutable evidence for the origin of species through Darwinian evolution.  Moreover, this commitment to evolutionary science as a way to explain the universe was part of their global liberal culture as cosmopolitan ecotourists.  As you might expect, we also talked about Donald Trump, who was just as baffling to these global liberal Europeans as the religious opponents of evolution.

I will have more to say about this in future posts.