The Darwinian Liberalism of Monet's Water Lilies: The Evolutionary Invention of Water Lilies and Their Markets 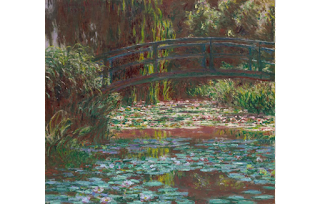 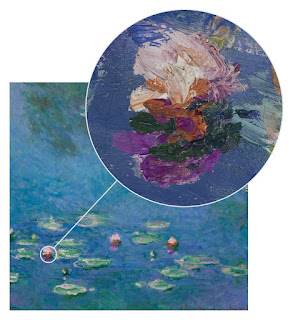 One of my favorite locations in the world is Gallery 243 in the Art Institute of Chicago, where some of Claude Monet's series paintings--pictures of water lilies, wheat stacks, and foggy London--are displayed.  Every time I go there, I am reminded of the day when I first became fascinated with Monet's paintings, when I was a graduate student at the University of Chicago.  It was March 13, 1975, and it was the first day of an exhibition at the Art Institute--"Paintings by Monet"--that had 122 of Monet's paintings from around the world.  I was particularly moved by the huge water lily paintings.  Ever since then, I have been trying to understand the attraction of these paintings.

A few days ago, I arrived early at the museum so that my wife and I could be the first people in the gallery.  I had recently read an article by Gloria Bloom--"The Real Water Lilies of Giverny"--that started me thinking about the Darwinian liberalism of Monet's water lily paintings.

The paintings are Darwinian in many respects. The water lilies in Monet's water garden were products of evolutionary artificial selection by horticultural domestication, which is a process of plant-animal coevolution.  Monet's landscaping of his gardens and his gardening of the plants can be understood as evolutionary niche construction.  The paintings and the plants were also products of a liberal order of global trade and free markets, which allows for the evolutionary economics of entrepreneurship in the markets for plants and art.  This also illustrates how Darwinian liberalism satisfies the natural desire of evolved human nature for the aesthetic pleasures of nature represented in visual art.  The universality of these aesthetic pleasures is indicated by the fact that these paintings by Monet have become some of the most popular images in the history of art.  They have also been commercially successful.  In recent years, some of the paintings have sold for over $50 million.  Amazon sells canvas print reproductions for about $37.

LATOUR-MARLIAC: THE INVENTION AND MARKETING OF MONET'S WATER LILIES

There are over 300 paintings of water lilies or Nymphaea (the subgenus of hardy water lilies) that Monet made over the last 27 years of his life (1899-1926) at his home in Giverny, a village 50 miles northwest of Paris.  Wikipedia has a good list of these paintings.

As Bloom indicates, art consumers and art historians have taken for granted the colorful water lilies planted in Monet's water garden, assuming that Monet must have found these plants easily available in the landscape of France.  But that is not true.  At the end of the 19th century, the only water lily that grew naturally in France was the hardy white species Nymphaea alba, which had been first identified by Carl Linnaeus. 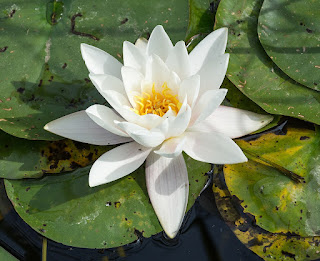 In 1889, at the World's Fair in Paris, the French horticulturalist Joseph Bory Latour-Marliac won a prize for his exhibition of water lilies that he had created by crossbreeding hybridization.  By crossing European species with species found in America and the tropics, he had created colorful lilies that were hardy enough to grow in the European climate (Holmes 2015). 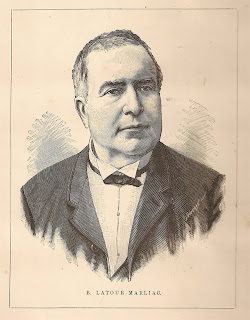 Monet was himself a horticulturalist, and he was impressed by Latour-Marliac's hybrids at the World's Fair.  At Giverny, Monet was diverting a stream through his property and landscaping to create a water garden.  By 1894, he was ready to begin planting, and he placed an order at the Latour-Marliac greenhouses for a wide variety of plants, including three types of water lilies: Nymphaea Mexicana, Nymphaea "Laydekeri Rosea," and Nymphaea "Odorata Sulphurea Grandiflora." 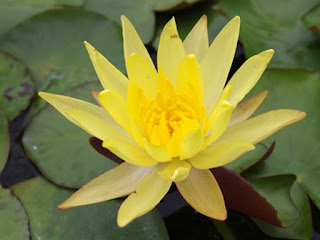 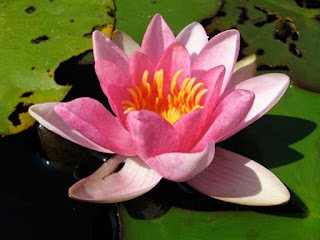 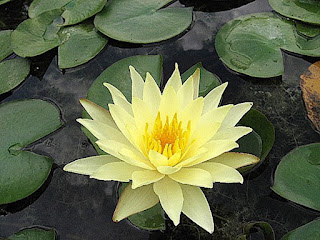 In 1904, Monet placed his second order for plants from the Latour-Marliac nursery, and this time it was only for red water lilies.  Now, he could compose his palette of colors balanced between yellows, pinks, and reds--both in his garden and in his paintings of the garden.  His garden would be in full bloom during the warmest months of the year--from May to September or October.  During the colder months, the tender plants could be overwintered in his large greenhouse.

Latour-Marliac's precise method for making his crosses is unknown.  But the general method for horticultural hybridizing is well understood.  The pollen parent plant provides the male reproductive material.  The seed parent plant provides the female material--the fertile womb.  To make a cross, the hybridizer takes the pollen from a plant that has some desirable characteristics (such as flower color or hardiness) and applies it to the female reproductive part, the pistil, of another plant.  Each seedling produced from this match will be a unique combination of traits from the parent plants.

This domestication and hybridizing of plants are important for Darwinian evolutionary thinking in six ways.  The first is that Darwin developed his idea of evolutionary natural selection from his understanding of the artificial selection exercised by human beings in domesticating plants and animals.  He made this clear in the first two chapters of the Origin of Species, where he compared "variation under domestication" and "variation under nature," and in the Introduction to his book The Variation of Animals and Plants Under Domestication.  He explained that it was through his study of "domestic productions" that he "acquired a just idea of the power of Selection" (1998, 1:10).  He saw that the term "natural selection" was "so far a good one as it brings into connection the production of domestic races by man's power of selection and the natural preservation of varieties and species in a state of nature" (1:6).  Just as the human breeder of plants and animals selects those traits that show "adaptation to his wants and pleasures," nature selects those traits that give an organism some adaptation for survival and reproduction in the struggle for life (1:4).

The second important contribution to Darwinian thinking here is that the human domestication of plants illustrates the ecological coevolution of plants and animals, so that plants and animals evolve to be mutually dependent.  This is true not just for human beings but for other animals as well.  For example, fungal species have been domesticated by bees and beetles, which shows that agriculture evolved millions of years ago among these animals, long before the emergence of human agriculture (Farrell et al. 2001; Nygaard et al. 2016; Purugganan and Fuller 2009; Schultz and Brady 2008).

The third point is that the human domestication of plants is a form of Darwinian niche construction.  In creating his water garden and planting it with Latour-Marliac's hybrid water lilies, Monet was creating a niche in which he could cultivate his artistic imagination.  Other animals and plants also engage in niche construction, so that instead of just adapting to the given natural environment, they construct their environment so that it is more hospitable to them.  I have written previously about this here and here.

The fourth way in which this contributes to Darwinian thinking is that understanding the artificial hybridization of plants helps us to think about the possibility that new species could have evolved by natural hybridization.  There is now a growing recognition that hybridization has been important for the evolution of many species--including the evolution of iguanas and finches in the Galapagos and even human evolution.  I have written previously about this here and here.

The fifth point is that the human breeding of Monet's water lilies illustrates the Darwinian evolution of a sense of beauty that could be crucial for a biological science of art.  In the Origin of Species, Darwin observed that the human domestication of plants and animals showed "adaptation, not indeed to the animal's or plant's own good, but to man's use or fancy."  And a plant might be adapted for man's "fancy" if it was made "beautiful in his eyes" (1859: 30).  The vibrant colors of Latour-Marliac's hybrid water lilies made them beautiful in Monet's eyes and the eyes of those who have contemplated his water lily paintings.  They human visual system has evolved to detect and appreciate colors that are wavelengths of light within the visible range for the human eye.  Similarly, the visual system of some other animals makes certain colors attractive to them.  This is part of what Darwin in The Descent of Man identified as the "sense of beauty" that human beings share with other animals.  One reason for this is what Darwin called "sexual selection":  in some animals, females prefer to mate with males they find colorful, or males select females that seem beautiful to them (2004, 114-16, 430-32, 461-65, 640-52, 664, 686-87).  In a future post, I will say more about this as part of the biology of art.

Finally, Latour-Marliac's breeding of Monet's water lilies can also be understood as evolutionary economics.  After all, Latour-Marliac's nursery was a business enterprise that had to struggle to survive in a competitive market.  This nursery is still operating and still selling water lilies, as you can see at their website.  In 2007, the business was purchased by Robert Sheldon, a professor of entrepreneurship at a business school in France.  He has written about the economic history of the business as an illustration of Joseph Schumpeter's evolutionary theory of economics, in which a capitalist economy is understood as a process of creative destruction: the economy is in a constant state of flux, with firms failing and freeing resources for innovative entrepreneurs who invent new products and services and thus create new markets.  Latour-Marliac showed this because to survive he had to innovate both in creating new plants by hybridization and in creating the markets for these plants.  The popularity of Monet's water lily paintings helped to create the demand for Latour-Marliac's water lilies, and Latour-Marliac had to cultivate a network of customers around the world.  After Sheldon took ownership of the firm, he innovated by creating a restaurant at the nursery and promoting the nursery as a tourist attraction (Sheldon 2017).

Another part of this story of evolutionary economics is the marketing of Monet's art and impressionist art generally, which was largely the work of the art dealer Paul Durand-Ruel--the subject of a future post.

You can see that going to Gallery 243 has given me a lot to think about.

Darwin, Charles. 1859. On the Origin of Species. London: John Murray.

Nowhere else would I see a serious, informative article entitled, "The Darwinian Liberalism of Monet's Water Lilies: The Evolutionary Invention of Water Lilies and Their Markets".