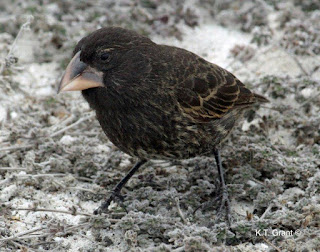 The Big Bird Finch of the Galapagos

Last year, in one of my posts on my second tour of the Galapagos Islands, I wrote about the evolution of new species through hybridization, including the report from Peter and Rosemary Grant that there might be a new species of finch on the island of Daphne Major arising from hybridization, although they had not yet said that this really was a new species.

Recently, the Grants have published their claim that this is indeed a new species that has evolved through hybridization (Lamichhaney et al. 2018; Wagner 2018).  In 1981, a male large cactus finch (Geospiza conirostris) arrived on Daphne Major, having immigrated a long distance (over 100 km) from the island of Espanola, the only island where this species is found.  They called him "Big Bird" because of his unusually large head.

Big Bird mated with a medium ground finch (G. fortis).  This pair produced offspring, and with only one exception, the offspring found mates descended from the original pair, thus breeding within the hybrid lineage, for over 30 years.  Because of their larger body size, they are called Big Birds.  So, as with the biblical story of Adam and Eve, we have a new species derived from a founding pair of mates.

Large cactus finches learn the distinctive song of their species by listening to their fathers sing, which is thus passed down through a culturally learned tradition.  The first Big Bird--the founding father--sang a unique song, slightly different from the song sang by male large cactus finches on Espanola.  This is the song now sung by male Big Birds, and it contributes to their reproductive isolation.

Another cue for reproductive isolation is that the size of the Big Birds' bill is intermediate between the bill sizes for the other species, which is probably a consequence of natural selection favoring a bill morphology adapted for feeding on certain kinds of seeds on Daphne Major.

Genetic analysis has confirmed that the Big Birds are a distinctive species separate from the other 18 species of finches on the Galapagos Islands.

Notice the historical contingency in this scientific study.  The rare and chance event of one individual bird with a unique song immigrating to Daphne Major and mating with a female of a different species, in the unique circumstances of that island at a particular historical moment, became a founding event for the evolution of a new species.

This illustrates the historical character of biology as the study of unique individuals with unique life histories and cultural traditions.  It is not true, therefore, that human beings are the only animals who have individual and cultural histories.  A biopolitical science of political animals must include the study of the individual personalities and the social history of those animals.  (I have written about this here, and here.)

My next post will be devoted to another kind of hybrid breeding by a founding father--Thomas Jefferson's interracial breeding with his slave Sally Hemings.