The Mappa Mundi in Hereford Cathedral: The Mental Map of the World Before Columbus, Locke, and Darwin

Videos on the Mappa Mundi in Hereford Cathedral 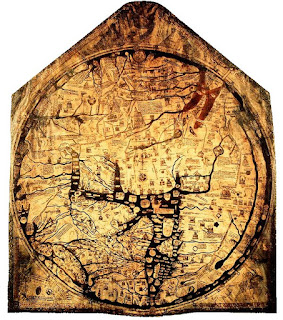 You can examine some of the features of the map at the Mappa Mundi website.

On the night of October 12th, 1492, Christopher Columbus and his sailors caught sight of land.  They landed on a small island that Columbus called San Salvador.  Although they were the first Europeans to explore the Caribbean islands, Columbus thought they were islands off the coast of East Asia.  Even after four voyages to what would be called the New World, Columbus did not fully understand the meaning of what he had done.

He did not understand that in voyaging to the New World, he and others were opening up for the first time in human history a global network of travel, trade, and communication that would bind human beings from all regions of the earth into one human community, which would become the Modern World.  Underpinning that new global human experience would be a new mental map of the world based on a global science of human history in all of its natural and cultural diversity across space and time.

People like John Locke began to develop that modern mental map of the world at the end of the 17th century through a careful study of hundreds of new traveler's reports from around the world with a concentration on America.  By the middle of the 19th century, Charles Darwin, after his five-year voyage around the world, worked out an evolutionary narrative for that new mental map of the universe.  I will say more about this in future posts.

And yet we cannot properly understand or assess that modern mental map without considering the medieval mental map that it replaced.  I have written a few times about the Medieval Model as compared with the Modern Model, particularly with respect to astronomy and cosmology (here and here).  But recently I have been thinking more about how medieval anthropology fitted into the medieval cosmos.

In doing that, I have been looking at the Mappa Mundi at Hereford Cathedral in England.  There were many of these world maps in medieval Europe.  But this is the only large and complete map of the world from the Middle Ages that has survived to the present.  (The larger Ebstorf map from northern Germany was destroyed in 1943 by an Allied bombing of Hannover.)  For interpreting the Hereford map, some books by Harvey (1996) and Simek (1996) are instructive.

The map was made sometime around 1289.  Over 700 years, its colors have faded.  But there are some images online that restore the original colors, with brightly green oceans, blue rivers, and a very red Red Sea.

This is not like a modern map devoted mostly to the physical topographical and geographic features of the land.  Rather, it is a synoptic vision of the whole natural, cultural, and spiritual world of the Middle Ages as experienced by European Christians.  It forms a kind of encyclopedia arranged geographically.  In fact, much of the information conveyed on the map came from ancient and medieval encyclopedias such as Pliny's Natural History and Isidore of Seville's Etymologies.

The map was drawn on a single sheet of vellum--calf skin that was probably from a calf bred for that purpose.  It is five feet two inches high and four feet four inches wide.  It is shaped something like the gabled end of a house with a triangular top.

The Hereford map is a circular map framed by the rest of the vellum.  The frame shows Christ at the top acting as the judge of the world at the Last Day.  To the right of Christ (our left), we see the human beings who are saved being beckoned to their eternal salvation.  To the left of Christ (our right), we see the human beings who are lost condemned to damnation in Hell.

The bottom left-hand corner of the frame contains the command from Caesar Augustus (according to Luke 2:1) ordering that the whole world go to be counted.  The bottom right-hand corner shows a hunter and a rider on horseback with the words passe avant--"forwards!"  The meaning of this is unclear.

The world map is oriented to the east at the top, so that the bottom is the west, the right is the south, and the left is the north.

Jerusalem is in the east at the absolute center of the map to indicate its central importance.

The terrestrial Paradise (the Garden of Eden) is located on an island at the top of the map off the coast of Asia.  The Straits of Gibraltar at Cadiz are located at the bottom of the map.

The entire map is encircled by oceanic water with islands (such as England and Ireland).

This map of the world as a circular disc has suggested to some people that medieval people thought the earth was flat, and that when Columbus proposed sailing west to Asia from Spain, he was ridiculed for not realizing that he would sail off the edge of the world.  In fact, however, the sphericity of the earth had been generally accepted since Aristotle.  Only a few medieval authorities tried to argue for a flat earth.  The debate provoked by Columbus's proposal was over whether the distance for a voyage west to Asia was too long to be safely traversed.

The map is stunning in its details, with almost a thousand entries, depicting rivers, mountains, cities, buildings, individual humans, strange non-human people, and animals (some familiar and some strange).

The primary sources for all of this information are the Bible and classical books (both pagan and Christian) that were traditionally authoritative.  Actually, the references to the Bible are not as numerous as one might expect.  Most of the biblical references are to the Old Testament--for example, Noah's Ark, the Tower of Babel, and the exodus of the people of Israel from Egypt.  The only clear reference to the New Testament is the crucifixion of Christ at Jerusalem.

To the modern viewer, the most amazing items on this map are the many fabulous creatures--such as the unicorn, the horned Satyrs, the headless Blemmyiae with their faces in their chests, people with the heads of dogs, and so on.

Most of us will see at least three major deficiencies in this map:  the ignorance of those parts of the world outside of Europe, Asia, and Africa, the credulous acceptance of what is reported in old books regarded as authoritative, and the ignorance of the evolutionary history of humanity.  Locke corrected the first two defects.  Darwin corrected the third.

We now know that beginning about 10,000 years ago, the rising seas at the end of the last ice age divided the world into four geographic zones that had little or no human communication between them: Afro-Eurasia (Africa and the Eurasian landmass, along with the offshore islands such as Britain and Japan), the Americas (North, Central, and South America, along with the offshore islands), Australasia (Australia, Papua New Guinea, and the neighboring islands), and the island societies of the Pacific (Hawai, the Polynesian islands, and New Zealand).

As a consequence of this, the Medieval Mental Map included only Afro-Eurasia, while the humans in the other three zones were similarly ignorant of those living outside their zone.  The people in these four geographical zones evolved their own distinctive cultures until the voyages of European sailors in the early sixteenth century began to connect these zones in a global network for the first time in human history.  This initiated what one can call the Modern Revolution, based on the complex collective learning made possible by this new globalization of human experience.  I have written about this as one of the insights of "Big History" here and here.

Locke first began to develop this insight into the globalist modern revolution through his study of the hundreds of travel books generated by the discovery of the New World.  The very idea of the "state of nature" arose from the discovery of the hunter-gatherer life of the American Indians as manifesting the original state of humanity.  And thus he expanded the boundaries of the European mental map beyond Afro-Eurasia.

In doing that, he had to also correct the second defect in the medieval mappa mundi--the reliance on authoritative books read without critical scrutiny.  Locke's Baconian empiricism elevated experience over books.  Even in his reading of the travel books, he favored those books that were based on eyewitness experience rather than hearsay and other books.

Some of those books described animals that were so similar to human beings that they seemed to be intermediate between human and nonhuman animals, which might suggest some evolution of human beings from nonhuman ancestors.  Although such evolution was not part of the medieval mental map, there were intimations of that in the medieval reports of animals that combined the human and nonhuman.

For example, the Hereford map has pictures of Cynocephales and Pygmies in northern Europe.  Cynocephales (literally, "dog-headed") were people with human bodies but dog heads.  The ancient Greeks and Romans called a species of baboons cynocephalus, because their heads are dog-like.  Even today the yellow baboon is identified as Papio cynocephalus--a baboon in the family of Old World monkeys that is found in central Africa.  In the middle ages, people debated whether these animals were human or at least some hybrid of human and nonhuman.

Similarly, the Pygmies were identified by some medieval scholars (such as Albert the Great) as intermediate between simians (monkeys and apes) and humans.  The simians and Pygmies, Albert said, show a "human likeness beyond all other animals."  I have written a previous post on this.  Darwinian evolutionary science has explained the natural causes of this human likeness among the primates.

Although Locke did not develop a scientific theory of evolution, he did suggest something like evolutionary history in seeing that human nature as we know it today was shaped in the original state of nature of our human ancestors, who lived in ways that resembled those hunter-gatherers discovered by the European explorers in America.  This was carried forward into a science of evolution by Darwin and those who developed Darwin's theory.

This laid the foundations for a Darwinian evolutionary science of Lockean liberalism.  This consummated a tradition of thought--linking liberalism and evolution--that goes back to ancient Epicureanism, which I have written about here, here, here, here, and here.