Footprints of the First Americans, 23,000 Years Ago 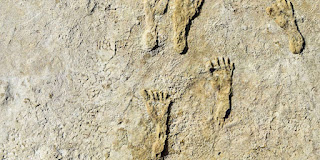 Was Locke right to declare that "in the beginning, all the world was America," and it is "still a pattern of the first ages in Asia and Europe"?

If we're looking for the evolutionary beginning of humanity in its distinctive anatomical, cognitive, and behavioral traits, then the beginning is in Africa, probably 200,000 to 100,000 years ago.  Since then, our human ancestors migrated out of Africa to all parts of the earth, including the Americas.

But if we're looking for the original social life of human beings as living in hunter-gatherer bands, we can see evidence for that in Middle Pleistocene Africa; but we can also see it manifested in the foraging bands of Indians in the Americas that became known to the European explorers in the sixteenth and seventeenth century, which could be seen by Locke in his reading of their travel reports.  This was Locke's original "state of nature."

From his reading of Jose de Acosta's Natural and Moral History of the Indies, Locke learned about Acosta's theory of the original human migration from Asia to North America over a land bridge connecting the two continents.  Over the past 150 years, the paleoarchaeological study of America has generally confirmed this theory, while providing precision in determining exacting when and how this migration happened, although there remains much uncertainty about the details.

In the 1930s, archaeologists excavating a site near Clovis, New Mexico, found some distinctively fluted projectile points--"Clovis points"--that came to be identified with a Clovis culture found elsewhere in America.  These Clovis points were associated with the bones of ancient mammoths and other large mammals now extinct, which suggested that the Clovis people were big-game hunters, who had perhaps hunted these animals to extinction.  These tools were identified at first as being at least 11,000 years old.  Later dating moved the estimate up to about 13,000 years old.

Supported by later research in the 1940s and 1950s, this led to what came to be called the "Clovis-first" model among archaeologists and anthropologists studying prehistoric America.  The Clovis people were thought to be the first human settlers in America, who entered North America from Asia through Beringia (the land bridge across the Bering Straits before it was submerged by rising sea levels) between 13,250 and 12,800 years ago (Meltzer 2015).  After entering North America, they could have migrated south through an ice-free corridor east of the Canadian Rockies that had been opened up by the melting of the glaciers.   During the Last Glacial Maximum (26,500 to 19,000 years ago), the time when the ice sheets were at their greatest extent over North America, ice covered all of Canada and extended south to the Missouri and Ohio rivers, which presumably would have obstructed any human movement from Alaska south into the continent (Clark et al. 2009).

Over the past 20 years, however, there has been growing evidence that people arrived in North America long before the Clovis people, perhaps during or even before the Last Glacial Maximum (Becerr-Valdivia and Higham 2020; Braje et al. 2020; Gruhn 2020; Meltzer 2021; Waters and Stafford 2007).  This week, scientists have reported the oldest human fossil evidence in North America--footprints found in the White Sands National Park in New Mexica that have been radiocarbon dated at 23,000 to 21,000 years old.  The dating came from ancient seeds of ditch grass.  The oldest footprints were located below a seed bed carbon dated at about 22,800 years (Bennett et al. 2021).

This still leaves open the question as to exactly when and how the ancestors of these ancient people in New Mexico migrated through North America.  One theory is that even when the glaciers were at their peak, people could have moved south along the western coastline.  Another theory is that the first people arrived more than 30,000 years ago, before the Ice Age glaciers reached their maximum extent, so that the people were able to travel inland through areas not yet covered by ice.

In any case, what we do know allows us to draw some important conclusions about the evolution of the first Native Americans.  We can infer that they must have been hunter-gatherers because there is no fossil evidence for horticulture, pastoralism, or farming, and because the domestication of plants and animals would have been impossible before the end of the last ice age (about 10,000 years ago) brought a warmer climate.

We can also say that the traditional assumption, based on calculations of Biblical history, that the world is no older than 6,000 years is wrong.

Becerra-Valdivia, Lorena, and Thomas Higham. 2020. "The Timing and Effect of the Earliest Human Arrivals in North America." Nature 584: 93-97.

I believe the assumption of a 6000 year old earth isn't very traditional. My understanding is that number was first calculated by an Anglican Bishop in the late 18th century. I assume that prior to that people believed the earth was young since they took Genesis as an accurate account but I would guess they didnt spend much time thinking about the numbers.

Augustine wrote about the common belief among Christian theologians that the world would go through "six ages" of a thousand years each, corresponding to the six days of Creation. II Peter 3:8 had said that "one day with the Lord is as a thousand years." Later, Saint Bede dated the creation of the world at 3952 B.C.

In the Essay Concerning Human Understanding (II.14.29), Locke said that many Christians believed that the world was created 5,639 years before the year 1689, or 3950 B.C. He also observed, however, that people elsewhere in the world thought the world could be millions of years old.