The Lockean Evolution of Nonviolent Revolution 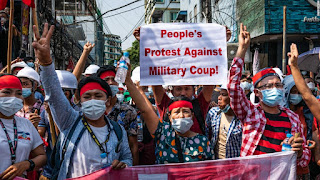 Myanmar Protesters Recently Using the Three-Finger Salute from "The Hunger Games."  The Military Dictatorship Has Banned This Salute.

Over the past three months, we have seen in Burma (Myanmar) what could have happened in the United States if Donald Trump had overturned the presidential election of 2020 and declared his right to rule under martial law.  In November, Burma's National League for Democracy led by Daw Aung San Suu Kyi won by a landslide the elections for Parliament.  On February 1, only a few hours before the new Parliament was to meet, the Burmese military (the Tatmadaw)--under the commander in chief, General Min Aung Hiaing--announced that because the elections had been fraudulent, the Parliament would be abolished, and the military would take power over the country under a one-year declaration of emergency.  Aung San Suu Kyi and other members of Parliament were arrested.  Almost immediately, protesters marched across the country, launching a nonviolent resistance campaign to overthrow the military dictatorship and restore parliamentary democracy.

Many Americans have feared that something like this could have happened in the United States.  Before the election of 2020, Trump indicated that he might refuse to accept the outcome of the election if he lost.  After he lost the election, he insisted that the election had been rigged against him, and so he might refuse to leave office.  Some of Trump's supporters--including Michael Flynn, speaking after he was pardoned by Trump--said that Trump should declare martial law and suspend the Constitution so that he could rule as a military dictator.  On January 6, Trump ordered his supporters to march to the Capitol to stop the Senate from authorizing the stealing of the election, which led to insurrectionary violence in the Capitol Building.

Before the election, thousands of Americans had agreed to an elaborate plan of action for a nonviolent resistance movement to stop any such military coup by Trump.  This plan--"Hold the Line: A Guide to Defending Democracy"--was based on the theory and practice of nonviolent civil resistance to overthrow dictatorships, particularly as studied by scholars like Gene Sharp and Erica Chenoweth (Marantz 2020; Merriman et al. 2020).

The fundamental idea behind this plan is Lockean--that governmental power depends on popular consent and that the people have the natural right to overthrow an oppressive government by withdrawing their consent.  This revolutionary overthrow of government can be either violent or nonviolent.  The proponents of nonviolent resistance argue that the nonviolent methods of revolution are more likely to succeed and cause less suffering than are the violent methods, and there is some historical evidence to confirm this.

Over the past 120 years, this history shows a Darwinian cultural evolution of nonviolent revolution, in which there has been an evolutionary process of variation and selective retention, so that methods of nonviolence that have succeeded in one country are transmitted by imitation in other countries.  In this evolutionary diffusion of ideas, scholars like Sharp and Chenoweth have provided instruction through the collection and analysis of the historical data for comparing violent and nonviolent revolutions.  (I have written some posts on this process of Darwinian cultural group selection.)

One historical example of how nonviolent resistance can overthrow a dictator who is trying to overturn an election is Serbia in 2000.  Slobodan Milosevic had been President of Serbia since 1989, whose authoritarian power was based on electoral fraud, suppressing freedom of the press, police brutality against his opponents, and political assassinations.  University students had formed an organization named Otpor (Serbian for "resistance") in 1998 devoted to overthrowing Milosevic through nonviolent resistance.  Their resistance movement was guided by the writings of Gene Sharp--particularly his book From Dictatorship to Democracy (2012)--which presented 198 methods of nonviolent revolutionary struggle  to overturn a dictatorship and establish a democracy in its place.  Sharp's book was translated into Serbian, and thousands of copies were distributed to political activists around Serbia (Arrow 2020, 176-92).  This book was an abbreviated version of his long magnum opus--The Politics of Nonviolent Action (1973), which originally was his dissertation at Oxford University.  (I have written some previous posts on nonviolent resistance here and here.)

Sharp taught them that every dictatorship--like every government--depends on "pillars of support" or key institutions that sustain the power of the dictatorship.  They might include the police, the military, governmental bureaucrats, businessmen, and religious organizations.  If enough people in those groups can be persuaded to defect--to withdraw their support--the dictatorship will collapse.  This could be explained by the idea of "minimal winning coalitions": no ruler can rule alone, because even an absolute dictator needs the loyal support of a coalition of powerful people, and when those people withdraw their consent to the government, the rulers become powerless.  (I have written about this in another post.)

Sharp thought that this dependence of rulers on popular consent was recognized by Niccolo Machiavelli when he said that the prince "who has the public as a whole for his enemy can never make himself secure; and the greater his cruelty, the weaker does his regime become" (The Discourses, I.16.5).  Sharp has been called "the Machiavelli of nonviolence," because of his Machiavellian toughness in explaining the strategy and tactics of nonviolent resistance as a form of revolutionary warfare.

In his public lectures, Sharp would often employ aggressive language.  He would begin by saying: "My name is Gene Sharp, and we're here today to discuss how to seize political power and deny it to others.  I say nonviolent struggle is armed struggle!  And we have to take back that term from those advocates of violence who try to justify with pretty words that kind of combat.  With this kind of struggle, one fights with psychological weapons, social weapons, economic weapons, and political weapons.  This is ultimately more powerful against oppression, injustice, and tyranny than is violence."

"The present unease of the troops in obeying orders is clear.  Otherwise he regime would have no need to order immediate killing of disobeying soldiers.  That is strong evidence that the reliability of the army is very shaky and possibly on the verge of collapse.  That means that wise resistance actions are crucial to take the army away from the regime. . . . The regime clearly is desperate.  They may intend for their brutalities to enrage protesters so much that they resort to violence.  The protesters should not be tricked into that.  Significant protest violence would guarantee the army's loyalty and the defeat of the revolution."

Sharp warned against the offer of armed protection for the protesters from the army defectors:

"This supposed major help can dramatically change the conflict so that the regime's still overwhelming superior military capacity will shape the course of the continuing conflict.  Then, without major external military intervention, the dictatorship is likely to triumph.  Inevitable major casualties are likely to vastly exceed even exceptionally high casualties in a nonviolent struggle conflict.  The nonviolent resisters are likely to become irrelevant to shaping the future of their country."

So here, as he had often done, Sharp claimed that nonviolent revolutionary movements are better than violent revolutionary movement in at least two respects:  nonviolent movements have a lower death rate and a higher success rate than violent movements.  In his writings, he cited many historical cases to support this claim (Sharp 1973).  But he never did a systematic quantitative analysis of the historical data that would conclusively demonstrate this.

In recent years, Erica Chenoweth and her colleagues have collected the historical data for over 627 nonviolent and violent revolutionary campaigns from 1900 to 2019, and they done a quantitative analysis of that data to compare the outcomes (success or failure) of these movements.  They have found that Sharp is right about the superiority of nonviolent movements over violent movements (Chenoweth 2021).  (I have written about Chenoweth's research here and here.)

We might say that nonviolent resistance is more risky than obedience.  But even obedience is risky if it means obeying a brutal government.  Chenoweth has found that the strongest predictor of nonviolent revolution is a government's violations of human rights: when a government is arbitrarily imprisoning, torturing, and killing people, then people can decide that they have no choice but to rebel.  This was Locke's point: people will suffer a bad government while its evils are sufferable, but they are inclined to revolt when governmental cruelty becomes unbearable.

How we answer this question will depend on how we define violence.  Chenoweth defines it as "an action or practice that physically harms or threatens to physically harm another person" (Chenoweth 2021, 145).  Even when a resistance movement is predominantly nonviolent, it can have "violent flanks"--some people in the movement who use violence along with the mostly nonviolent campaign.  These violent flanks can be either armed (people taking up arms such as guns) or unarmed  (people fighting in the streets or throwing rocks and other projectiles or destroying property).

She noted, however, that authoritarian rulers threatened by nonviolent resistance want to provoke nonviolent protesters into becoming violent, because this allows the rulers to justify the violent repression of the resisters as the proper punishment of violent criminals.  When nonviolent protests become violent, this reduces public support for the protest movement, while at the same time the police and the military are less likely to defect.  Her historical data confirm this: while 65% of the nonviolent revolutions that had no fringe violence were successful, only 35% of the nonviolent revolutions that had some fringe violence were successful.

So why then do nonviolent resistance movements so often turn to violence?  The answer from Sharp and Chenoweth is that when nonviolent resisters rely exclusively on concentrated street protests, they expose themselves to violent attacks from the government; and this will often provoke many of them to defend themselves with violence.  Their mistake is in failing to see that there are many methods of nonviolent resistance that are less risky than visible street protests--such as stay-at-home strikes, boycotts, and other forms of noncooperation--that are effective in weakening a dictatorship.

So how does this apply to the current situation in Burma?  Can the nonviolent resistance against the military dictatorship remain nonviolent?  Or will the movement be provoked by the government into violence?  I will turn to those questions in my next post.

Sharp, Gene. 2012. From Dictatorship to Democracy: A Conceptual Framework for Liberation. New York: The New Press.