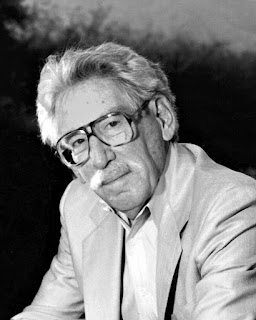 Albert Somit died on August 2, 2020, at the age of 100.  He was one of the most distinguished political scientists of his generation.  His distinctive contribution to political science was in applying biology to politics and thus promoting "politics and the life sciences" or "biopolitics," which has shaped my thinking since the late 1970s.  There is a good obituary that tells the story of his life.

Shortly before his death, he finished writing his last professional paper (co-authored with Steven Peterson) for presentation at the 2020 virtual convention of the American Political Science Association, with the title "Political Science and Biology: Then, Now, and Next."  This is a valuable survey of the history of biopolitics within the discipline of political science, which helps me to think about this as a striving for what I call "biopolitical science."  (You can request a copy of this paper from Steven Peterson at sap12@psu.edu)

Although they do not develop the idea, Somit and Peterson point to biopolitical science as I understand it when they say that by the 1960s political science was not yet a "real science," because it lacked an "overarching theory" or "paradigm" or "Big Idea," and that a biological science of politics could provide the paradigmatic intellectual framework that was needed.  This could succeed where other proposed frameworks--such as power, systems theory, structural-functionalism, and rational choice theory--had failed (4).  If this were to happen, "biopolitics would no longer be seen as a special, narrow part of political science--but a part of every field in the discipline, integrated into the larger world of the study of politics" (26).

The idea of a biopolitical science has seemed ridiculous to most political scientists (and to social scientists generally), Somit and Peterson explain, because they agree with Emile Durkheim's dictum that "human social behavior was socially acquired," which means that human social behavior is culturally learned rather than biologically innate.  This is what John Tooby and Leda Cosmides have called the Standard Social Science Model (SSSM)--the belief that human social life is purely cultural or socially learned and thus transcends biology, that it's more nurture than nature (4).

Somit and Peterson see "biopolitics" as the name for those few political scientists who began in the 1960s and 1970s to challenge the cultural determinism of the SSSM by showing that biological factors do have some influence on human politics and social behavior.  The idea here, Somit and Peterson say, is "that political scientists should give proper weight to the role played by Nature, as well as by Nurture, in shaping our social and political behavior."  "The most powerful factor shaping Homo politicus is our species' genetic legacy as social primates.  That legacy, together with socialization, influences almost every aspect of our social, political, economic, and cultural life" (11).

But notice that they accept the Nature/Nurture dichotomy and the separation of biological science as explaining our "genetic legacy" from cultural studies as explaining our "socialization."  They assume that cultural history and social learning are not part of biology.  Thus they implicitly deny the comprehensiveness of biopolitical science--as I understand it--because they deny that a biological science of politics can explain not only the genetic nature but also the cultural history of political behavior.  They identify the biological science of ethology or animal behavior as an important part of biopolitics, but they fail to recognize how studying the cultural history and biographical history of social animals has become a crucial part of ethology.  So, for example, Jane Goodall's Chimpanzees of Gombe is a study not only of the genetic universals of chimpanzee behavior but also of the cultural history and individual personalities of the chimpanzees at Gombe.  (I have written about the biological study of animal cultures and animal personalities here and here.)

Somit and Peterson rightly give prominence to John Hibbing and his colleagues in their promotion of genopolitics and the psychophysiology of political ideology.  Somit and Peterson recognize that there is a serious weakness in this research in that it has failed to be replicated, which suggests that it is deeply flawed.

But they do not recognize the fundamental problem with this approach to biopolitics: it works with unduly simplified models of genes and neurobiology that cannot capture the emergent complexity of political behavior as the product of many interacting causes and levels of analysis.  I have suggested that a more complex version of biopolitics would have to move through at least six dimensions of political evolution:

That's what I mean by biopolitical science.

I have written about this here and here.

I should also say that I have been free to devote a good part of my intellectual career to developing this idea of biopolitical science because I was fortunate to be part of the "Politics and Life Sciences" program in the Department of Political Science at Northern Illinois University.  Somit and Peterson recognize this as the only program of its kind--founded in the early 1980s and coming to an end in 2012.  I joined the program at its start in 1983 and stayed there until my retirement in 2012.

There were two unique features of this program at NIU.  First, this was the only Ph.D. program in political science anywhere in which Politics and the Life Sciences was a graduate field of study.  Second, the undergraduate program included some courses that were cross-listed as both political science and biology courses; so that these courses enrolled both biology majors and political science majors, which promoted good interdisciplinary class discussions.  These courses were popular with biology majors who wanted to think about the broad humanistic implications of biology beyond the narrow constraints of their regular biology classes.  I team-taught one of these courses with a biology professor (Neil Blacksone).

As Somit and Peterson indicate, in recent years a Ph.D. specialty in biopolitics has been established at the University of Nebraska at Lincoln.

Somit and Peterson recognize this as the only program of its kind--founded in the early 1980s and coming to an end in 2012. I joined the program at its start in 1983 and stayed there until my retirement in 2012.

Now those are some sad sentences. Though perhaps as a silver lining, this blog is your "retirement project"? I'll bet there are some stories, though perhaps none you are willing to share. (It's not gossip; it's sociology of academia!)

Yes, it was sad to see the program shut down. But still the fact that the program lasted over 30 years is impressive. We had some great faculty in the program--Tom Wiegele, Bob Blank, Jim Schubert, Andrea Bonnicksen, and Rebecca Hannagan. Originally, Wiegele was the founding President of the Association for Politics and the Life Sciences and the editor of the APLS journal. We had three or four areas of study. I taught biopolitical theory. Others taught biopolitical policy, biotechnology, and biopolitical psychology.