Visceral Politics: Lockean Liberalism in the Neuroscience of the Brain's Bodily Self-Ownership

Neuroscientist Manos Tsakiris has written a fascinating essay for Aeon with the title "Politics Is Visceral."  What Tsakiris says about "visceral politics" supports what I have said about how modern neuroscience confirms John Locke's grounding of natural rights in bodily self-ownership.

Here's the first part of his essay:

"We live in bodies that feel increasingly unsafe.  Pandemics, climate change, sexual assault, systemic racism, the pressures of gig economy jobs, the crisis of liberal democracy -- these phenomena create feelings of vulnerability that are, quite literally, visceral.  They're visceral in the sense that emotional experience arises from how our physiological organs--from our guts and lungs to our hearts and hormonal systems--respond to an everchanging world.  They're also political, in that our feelings affect and are affected by political decisions and behavior."

"It's not surprising, then, that political language has become saturated with emotion.  Whether one calls the present era a time of anxiety, fear, or anger, visceral states and feelings appear at the forefront of the political conversation. . . ."

". . . 'visceral politics' emerges out of a historically novel scientific understanding of the human being, not so much as a rational creature, but as a primarily embodied and affective one.  Visceral politics lies at the intersection of the body's physiology and political behavior. . . ."

"Humans are biological organisms that first and foremost have to deal with the problem of survival.  The key way that organisms stay alive is by homeostasis--the maintenance of stability by keeping the body's processes within a 'margin of safety' that sustains life and wellbeing.  For example, homeostasis involves the regulation of temperature, heart rate and blood pressure, as well as hunger and satiety.  But it's inefficient and dangerous for the brain to simply wait around passively for these physical cycles to drop into the danger zone.  Rather, it tries to predict the future states of the body, with the aim of achieving dynamic regulation.  For example, in anticipation of a stressful situation, the body will change its blood pressure, metabolism, and hormonal levels to meet those needs before they arise.  In other words, the brain strives to predictively adjust bodily states in response to actual and expected demands.  This constant calibration is known as allostasis, the process of achieving stability (homeostasis) through physiological or behavioral change."

"For allostasis to succeed, the organism must be in a position to monitor its current state, as well as to anticipate upcoming changes and the resources required to return it to a desired state.  Such self-regulation relies on an ability known as interoception, the way in which we perceive visceral states and become aware of how we feel.  The value of interoception is evident when you consider that cognition takes place within a body that, firstly, needs to stay alive, and secondly, needs to be well.  According to the psychologist Lisa Feldman Barrett, the brain serves the body by proactively maintaining a healthy body budget: it anticipates future situations that might put the organism at risk.  It is constantly trying to predict what is out there, as well as actively predicting what is inside, including changes in our visceral organs that give rise to affective states."

Here Tsakiris is appealing to Lisa Feldman Barrett's argument that the brain evolved not for thinking or feeling but for moving the body, and to move the body in worthwhile ways, the brain must engage in what she calls "body budgeting," which scientists call allostasis (2017, 2020).  She has briefly stated her reasoning in an essay  for the New York Times that echoes the themes of Tsakiris's essay.

Barrett explains that if you could go back to the beginning of animal life--about 550 million years ago--you would see that the Earth was ruled by sea creatures without brains.  Their lives were so simple that they could solve their problems about how to survive without any need for a brain.

One of those sea creatures resembled what today we know as the amphioxus or lancelet. 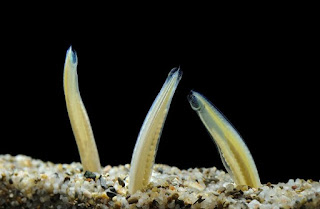 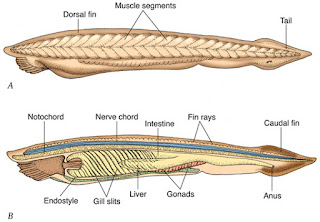 Darwin believed that this lancelet or an animal similar to it was the ancient evolutionary ancestor of the vertebrates, including human beings (Darwin 2004, 186, 193).  Lancelets and vertebrates belong to the phylum called chordates because they all have a nerve cord running down the back.  The nervous system of the lancelet includes a tiny clump of nerve cells that are not quite a brain.  This was enough to support its simple systems for sensing, moving, and eating to survive.  It plants itself in the seafloor and then eats any tiny organisms that happen to drift into its mouth.

The evolution of the vertebrate brain probably began at the beginning of the Cambrian period--around 500 million years ago--with the first appearance of hunting (Barrett 2020, 1-12; Striedter and Northcutt 2020, 71-78).  Some creatures evolved with the ability to sense the presence of another creature and then deliberately seek it out to eat it.  This predatory hunting did not require a brain, but it probably was the first step toward the evolution of brains.  Hunting drives an evolutionary arms race in which animals need to sense the world around them, detect predators and prey, and then decide how to eat their prey while avoiding or repelling their predators.  Those who were good at this were more likely to survive and flourish.

In Darwinian Natural Right, this is what I called "the normative structure of animal movement."  And as I have indicated in a previous post on Friedrich Nietzsche's sociobiology of animal morality, he saw the evolved animal roots of morality in the need for animals to successfully navigate through the threats and opportunities in their physical and social worlds to find food and protection from dangers.  "The beginnings of justice, as of prudence, moderation, courage--in short, of all we designate as the Socratic virtues, are animal:  a consequence of that drive which teaches us to seek food and elude enemies.  Now if we consider that even the highest human being has only become more elevated and subtle in the nature of his food and in his conception of what is inimical to him, it is not improper to describe the entire phenomenon of morality as animal."

The ultimate principle for this animal morality is the efficient use of energy.  If an animal burns up energy chasing potential prey that it can never catch, or running away from a potential predator that never arrives, this is a waste of resources that might be needed later.  Here is where Barrett says we need to think about energy efficiency as being like a financial budget that tracks the flow of money as its earned and spent, which requires that we predict our future financial needs so that we save or spend our resources in the most efficient way.  Barrett explains:

A budget for your body similarly tracks resources like water, salt, and glucose as you gain and lose them.  Each action that spends resources, such as swimming or running, is like a withdrawal from your account.  Actions that replenish your resources, such as eating and sleeping, are like deposits.  This is a simplified explanation, but it captures the key idea that running a body requires biological resources.  Every action you take (or don't take) is an economic choice--your brain is guessing when to spend resources and when to save them (2020, 6).

The scientific name for this predictive body budgeting is allostasis--based on two Greek words that denote maintaining stability through change.

As animals evolved larger and more complex bodies with more complex internal systems--such as a cardiovascular system, a respiratory system, a digestive system, and an immune system--these systems required a constant flow of many resources, such as water, salt, blood, glucose, cortisol, and sex hormones.  And all of these many resources had to be carefully regulated to keep the body operating efficiently.  They needed more than just a few nerve cells that do the body budgeting for a simple lancelet's body.  As Barrett says, while body budgeting for a lancelet is like managing one simple bank account, body budgeting for the more complex vertebrate animal bodies is more like the accounting department for a multinational corporation.  These animals needed a brain.  They needed a brain to keep them alive and well by managing their body budget.

This job became especially complicated for brains in the bodies of those animals that evolved as social mammals, because these animals needed resources that could only be provided by the cooperation of other brains-in-bodies.  They had entered the world of visceral politics.

Among the social mammals, newborns cannot manage their body budgeting by themselves, and they need caregivers--parents or parental surrogates--to provide some of the resources their bodies need for survival and well-being.  Even when they grow into adulthood and become somewhat independent, they still need social support to sustain their allostatic regulation of their bodies.  As Tsakiris says, social animals need social allostasis to regulate their body budgets for a secure and flourishing life.

Social allostasis requires that the brain generate social emotions, because emotions are mental representations of bodily states--of what is happening or what we expect to happen both inside and outside our bodies--and whether those bodily states are painful or pleasurable.  The experience of those emotions--such as anger or fear, love or hate, anxiety or serenity--move us to act, perhaps by running away or attacking or seeking the help of family and friends.

Political rhetoric can arouse or allay those social emotions in ways that drive political action and debate.  Tsakiris brings up the example of Donald Trump speaking at a rally in 2019: "The American people are fed up with Democrat lies, hoaxes, smears, slanders and scams.  The Democrats shameful conduct has created an angry majority, and that's what we are, we're a majority, and we're angry."

In recent months, Trump has incited that anger into a hot frenzy by telling Americans that the Democrats committed mass vote fraud to steal the presidential election for Biden, and that this is all part of their conspiratorial plot to destroy America.  On January 6, he spoke at the "Save America" rally telling his audience that to save America they must march to the Capitol and fight to stop the Congress from certifying Biden's electoral victory.  The anger that he created through his rhetoric moved his followers to engage in violent rioting in the Capitol building as they searched for people that they could punish.

That was a vivid display of visceral politics.

I have written previously about Trump's emotional rhetoric and how it might be defeated by a Lockean liberal rhetoric (here, here, here, and here).

Barrett, Lisa Feldman. 2017. How Emotions Are Made: The Secret Life of the Brain. New York: Houghton Mifflin Harcourt.

Barrett, Lisa Feldman. 2020. Seven and a Half Lessons about the Brain.  New York: Houghton Mifflin Harcourt.