Disowning One's Own Body: Somatoparaphrenia and the Bodyguard Hypothesis for Bodily Self-Awareness

Oliver Sacks told the story of a man who woke up in a hospital bed, and when he moved, he felt someone's leg in his bed.  He thought the nurses were playing a cruel joke on him by putting a severed leg in his bed while he slept.  He threw the leg out of the bed.  But when he did this, he somehow came after it.  Falling on the floor, he was shocked to discover that the leg was attached to his body.  He began punching the leg and trying to tear it from his body.  When Sacks arrived, he told the man he shouldn't be punching the leg like that.  "And why not?" the man exclaimed.  "Because it's your leg," Sacks answered.  "Don't you know your own leg?" The man insisted that this was not his leg.  Sacks then asked him, "If this is not your left leg, then where is your own left leg?" The man turned pale.  "I don't know," he said.  "I have no idea.  It's disappeared.  It's gone.  It's nowhere to be found . . ." (Sacks 1985, 53-55).

Recently, I have been studying some of the research on one of the strangest of those disorders of bodily disownership--somatoparaphrenia.  The man described by Sacks was probably a somatoparaphrenic patient.

The term somatoparaphrenia is derived from three Greek words: soma (body), para (next to, in addition to), and phren (mind, the locus of thought).  So it denotes "body outside the mind."  People who have suffered strokes in the right hemisphere of the brain often suffer through a period in which they deny that their left leg or arm belongs to them--it doesn't feel like their body.  And in many cases they identify that body part as belonging to someone else (Feinberg et al. 2010; Vallar and Ronchi 2009).

When somatoparaphrenic patients are asked to identify their left hand, they are confused.  They will say: "How am I supposed to know whose hand is this?  It's not mine" (Gandola et al., 2012, p. 1176).  They can see that their left hand or left leg is attached to their body, but it doesn't feel like it's part of their body.  One patient said: "My eyes and my feelings don't agree, and I must believe my feelings.  I know they look like mine, but I can feel they are not, and I can't believe my eyes" (Vallar and Ronchi 2009, 545).

One person reported: "I woke up last night and called the nurse because there was this hand here, and I thought that Nadia forgot it.  I wanted to give it back to her.  She cannot work without it.  Poor Nadia" (Gandola et al. 2012, 1177).

Asked about her left hand, another person said: "It's my niece's hand.  She is so kind, she left it here to keep me company."

In one study of stroke patients admitted to a New York City hospital over a 5-year period, the doctors found that the misidentification of one's own limb after right hemisphere stroke was common but transient.  They saw that 61% (22 of 36) of right middle cerebral artery stroke patients could not identify a left limb within the first 36 hours of stroke.  But this declined quickly to 44% at 3 days and 15% at 1 week.  Of those who could not identify a limb, 77% (15 of 22) said that the limb belonged to someone else.  The doctors concluded: "Spontaneous biological recovery begins in the first hours and days after stroke" (Antoniello and Gottesman 2017).  So it seems that the brain has evolved to be resilient in response to damage to restore the normal sense of bodily self-ownership.

This research by Antoniello and Gottesman included brain scanning (MRI and CT) of these patients.  They found that damage to the right supramarginal gyrus in the inferior parietal lobe was associated with those who misidentified their limbs. 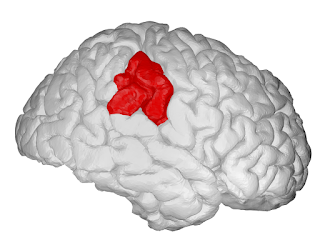 This agrees with the report of Feinberg et al. (1990).  But other studies have identified damage to other regions of the brain as associated with stroke patients who misidentify their limbs.  Antoniello and Gottesman explain this disagreement by saying that in these other studies, the examinations of the stroke patients occurred 3 to 9 days after the onset of the stroke; and since limb misidentification is so transient, their control groups were contaminated with false negatives.

So what is required for the sense of bodily ownership?  What has gone wrong when people feel that their own body parts are alien to them?

Comparing the studies of somatoparaphrenia, other bodily disorders, and illusions such as the rubber hand illusion provides evidence for what Frederique de Vignemont (2020) calls the Bodyguard Hypothesis: the brain has evolved to protect the body through neural circuits that have a protective body map that creates a sense of bodily ownership and affective motivation to behave in ways that protect the body identified in the body map.  Disownership syndromes occur when the body map does not represent a limb that feels alien.  Illusions of body ownership occur when the body map mistakenly represents something as a body part.

By contrast, a somatoparaphrenic patient can feel that his left leg is alien, that it does not belong to him.  And if he sees that leg threatened by a knife, he will not show an increased skin conductance response.

Similarly, those who suffer from xenomelia, who might want to have their left leg amputated, do not feel that leg is really theirs, and they will not show any protective response when it is threatened.

The opposite mistake occurs in the rubber hand illusion and in the experience of phantom limbs.  People can momentarily have the feeling that a rubber hand is their hand, and they show a protective response when they see it threatened.  Similarly, those who are missing one of their limbs--either from congenital deformity or from amputation--can feel that the missing limb is really a part of their body, and they will show a protective response when it is threatened.

In a French podcast, Frederique de Vignemont has conveyed her Bodyguard Hypothesis in one senstence: Je me protege donc je suis.  I guard myself, therefore I am.

Evolution by natural selection favors those psychological propensities rooted in the brain that enhance our chances for self-preservation, which includes a sense of personal identity expressed in our identifying and protecting our bodies.

Sacks, Oliver. 1985. The Man Who Mistook His Wife for a Hat, and Other Clinical Tales. New York: Summit Books.