The Evolutionary Psychology of Magna Carta and the Rule of Law 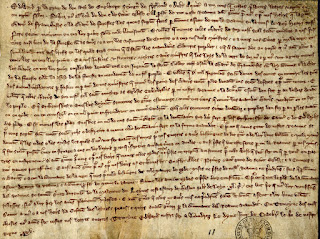 In a few days, we will reach the anniversary of Magna Carta, which was a charter of rights agreed to by King John of England at Runnymede meadows, near Windsor, about 20 miles west of central London, on June 15, 1215.  For over 800 years, Magna Carta has symbolized the idea of the rule of law--the idea that freedom from unjustified force is secured under the rule of law when no person is above the law, and all people are equal before the law in the legal enforcement of their individual rights.

The power of this idea is illustrated now by the massive protests against police brutality and racial injustice sparked by the killing of George Floyd by a Minneapolis police officer on May 25.  The video of the police officer--Derek Chauvin--pressing his knee into the neck of Floyd until he died from suffocation was seen by billions of people around the world as an unjust violation of the rule of law.  This officer seemed to act as if he was not subject to the laws against violent assault and murder, and Floyd was not equal to all other citizens in having a right to life.  The many proposals for reforming police departments are designed to insure that police are under the rule of law, so that they will be punished for infringing on the rights to life, liberty, and property without due process of law.

The protests against the killing of Floyd have appeared in over a thousand locations in all 50 states of the U.S. and in over 40 other countries, including all of the European countries and around the world from Argentina and Brazil to Australia, New Zealand, and Hong Kong.  This shows a universal moral sentiment of disgust elicited by the violation of the principle of the rule of law, which suggests that this is rooted in evolved human nature.

To see Magna Carta as the original source for this idea of the rule of law has been challenged over the past one hundred years by some historians of law who ridicule this as a "myth" contrary to the historical reality of Magna Carta, which was nothing more than a failed attempt to achieve a peace treaty between King John and some rebellious barons trying to secure their baronial privileges.  The "myth of Magna Carta" was invented, the historians say, by Sir Edward Coke and other opponents of monarchic absolutism in seventeenth century England, because the idea that Magna Carta was part of an "ancient constitution" protecting the liberties of the people from monarchic tyranny was a good rhetorical weapon to use against the Stuart royalists (Herzog 2018; Jenks 1904; Pocock 1957).

But if one looks at the evolutionary history of Magna Carta--as a work of natural law, customary law, and statutory law--one can see that in advancing the aristocratic interests of their class in 1215, the English barons made an argument--that monarchic political authority could be constrained by a rule of law that protects the liberty of subjects--that could be expanded over the subsequent 800 years on a wider scale to secure the equal liberty of all individuals.  Although the "myth of Magna Carta" is not literally true, it is symbolically true as an evolutionary development of the inherent potential of Magna Carta for adapting to changing circumstances.

A FAILED PEACE TREATY
King John was a wretched monarch whose oppressive rule alienated many of his subjects, including his Barons, who were given their titles and their large tracts of land by the King.  Many of the Barons were angry about the King's endless increases in royal taxes and required payments and by the unjust arbitrariness of the King's courts.

Some of the Barons became so rebellious that they initiated a civil war to overthrow the King, and some tried to have him assassinated.  This was a common pattern in English history.  Almost every English King after William the Conqueror had faced a revolt by the nobility.  Failing to defeat the rebels in war, and fearing that he would be killed if he did not yield to their demands, King John was forced to meet the baronial leaders of the revolt at Runnymede and agree to affix his royal seal to Magna Carta, which declared that the King would secure a long list of "ancient liberties" for "all free men" in his kingdom.  Not trusting the King to keep his word, the Barons added a security clause at the end of the document, which provided for the election of twenty-five barons who would punish the King for any violations of the agreement by taking the King's castles, lands, and possessions.

Here we see the evolutionary origin of individual liberty, which always appears first as a by-product of a struggle for power among elite groups rather than as the result of any deliberate aim to advance liberty.  As I have suggested in some previous posts (here, here, here, here, and here), the Lockean evolutionary history of liberty is driven by the violent and non-violent resistance to tyranny, which Locke identified as the "executive power of the law of nature," and which includes civil war and killing kings.  The police protests show that same natural human propensity to resist oppressive injustice.

King John appealed to Pope Innocent III to annul Magna Carta by finding it a "shameful and demeaning agreement, forced upon the King by violence and fear."  The Pope did that, and England was thrown into what was known as the First Barons' War.  The Barons offered the crown of England to Prince Louis of France, who intervened in the civil war on the side of the Barons.  King John died in 1216 from an illness.  When the civil war ended in 1217, Magna Carta was reissued on behalf of Henry III, John's young son.  This began a long history in which Magna Carta was confirmed by later kings and revised by statutes of Parliament.


THE DOCUMENT
By the conventional numbering of the clauses, the original version of Magna Carta from 1215 has 63 chapters, while the version from 1225 has 37 chapters.  Most of those clauses assign rights or liberties to specified classes of people.  Six social classes are expressly mentioned: earls and barons, knights, "free men" (liberi homines), clerics, merchants, and villeins.  As Jenks and other historians have observed, nothing is said about the rights of "the people," which might seem to deny the mythic view of Magna Carta as securing the individual rights of the people.  Rather, most of the rights here are assigned to the aristocratic classes.

Most of the English people in 1215 were villeins (or serfs) who were tied to the manor of a lord, who did the servile work of the manor, and who were held by the lord as his property.  The "free men" are distinguished in Magna Carta from the villeins, and also from earls, barons, knights, clerics, and merchants.  "Free men" seem to be aristocratic landowners.

So while most of Magna Carta was written by Barons to protect their own privileges, there is some extension of rights to non-baronial classes, including the tenants of the Barons.  Chapter 60 declares: "all those customs and franchises mentioned above which we have conceded in our kingdom, and which are to be fulfilled, as far as pertains to us, in respect to our men; all men of our kingdom as well as clergy as laymen, shall observe as far as pertains to them, in respect of their men."

The two passages that were most important for Edward Coke's claim of an "ancient constitution" limiting the King's powers and protecting the rights of the people were chapters 12 and 39.  Chapter 12 reads: "No scutage or aid shall be imposed in our kingdom except by the common council of our kingdom, except for the ransoming of our body, for the making of our oldest son a knight, and for once marrying our oldest daughter, and for these purposes it shall be only a reasonable aid."  "Scutage" was a money payment in lieu of knight's service.  An "aid" was a grant by the tenant to his lord in times of distress.

Coke argued that this required parliamentary consent to royal taxation.  Some historians say this was a misinterpretation because there was no Parliament in 1215.  One could argue, however, that "the common council of our kingdom"--the "Great Council" of advisors to the King--was the predecessor of what became Parliament later in the 13th century.

The second important passage for Coke was chapter 39: "No free man [liber homo] shall be taken or imprisoned or dispossessed, or outlawed, or banished, or in any way destroyed, nor will we go upon him, nor send upon him, except by the legal judgment of his peers [nisi per legale judicium parium] or by the law of the land [per legem terrae]."

This is often said to be the first statement of the rights of the people to trial by jury, due process of law, habeas corpus, and the equal protection of the laws--traditional common law rights found in the amendments to the U.S. Constitution.

Some historians have made three arguments for why this is an unhistorical misinterpretation of this passage.  The words "no free man" implies a limitation to a small class of people.  The words "law of the land" are too vague to convey the modern idea of "due process of law."  And "legal judgment of his peers" probably meant not trial by jury but trial of barons by persons of equal rank rather than the king's judges who were of lower rank.

But while this might be true for the original meaning of chapter 39 in 1215, this ignores the fact that Coke's interpretation of this chapter was formulated as early as the 14th century in parliamentary statute.  Between 1331 and 1368, Parliament passed six statutes interpreting "no free man" to mean "no man" or "no man of whatever estate or condition he may be," interpreting "law of the land" to mean "due process of law." and interpreting "legal judgment of his peers" to mean trial by jury (Holt 2015, 39-40).

Here we see how Magna Carta fits into the evolutionary history of individual liberty under the rule of law as shaped by human nature, human custom, and human judgment, and as ultimately rooted in the evolved human instinct for resisting arbitrary absolute power over one's life, liberty, and property.

Herzog, Tamar. 2018. A Short History of European Law: The Last Two and a Half Millennia. Cambridge, MA: Harvard University Press.

Initially, the Magna Carta was conservative in nature: in most articles it consolidated, streamlined and clarified generally recognized and established norms of customary feudal law. During the preparation and conduct of the English Revolution, the Charter acquired the significance of a symbol of political freedom, becoming the banner of the English struggle against royal despotism and the foundation of the Petition for Law and other constitutional documents, and the guarantees proclaimed by it to prevent violations of the rights of English citizens had an impact on the establishment and development of the institution of human rights.