How Guns Made the Civil Rights Movement Possible 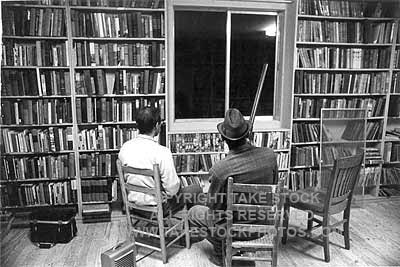 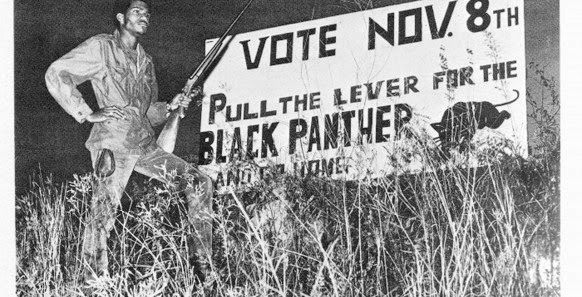 A young man guarding a Black Panther billboard in Lowndes County, Alabama (a place so violent that it was known as "Bloody Lowndes").  This photograph was taken during the 1966 election for county offices.  The year before, only one black person was registered to vote in this majority-black county.  Now black registered voters outnumbered white registered voters and had formed the Lowndes County Freedom Organization, a political party whose symbol was a black panther.

A video on the Deacons for Defense and Justice, formed in Jonesboro, Louisiana, in the summer of 1964.


This summer is the 50th anniversary of a critical period in the history of the American civil rights movement.  The passage of the Civil Rights Act of 1964 provoked many white Southerners into angry resistance, which included renewed violence from the Ku Klux Klan and the white Citizen's Councils.  The major civil rights organizations formed a coalition to support "Freedom Summer" in Mississippi.  Organizers moved throughout Mississippi to register black voters, in a state with the lowest percentage of registered black voters.  Organizers also set up "Freedom Schools" to provide blacks some of the education that they were not receiving in their segregated schools--including reading, mathematics, science, and American history with an emphasis on black history.  The violence against the "Freedom Summer" organizers included the Klan killing of James Chaney, Andrew Goodman, and Michael Schwerner, whose bodies were found on August 4th.

During this same summer of 1964, some black leaders in Jonesboro, Louisiana, formed the Deacons for Defense and Justice, which was an organization of men trained to provide armed protection for civil rights workers in the South.  As was true for much of the civil rights movement in the South, the leaders were black military veterans who had served in World War II and the Korean War.  Chapters of the Deacons for Defense spread throughout the South over the next few years.

This armed self-defense might seem to be oddly contradictory to the widely professed nonviolence of the civil rights movement.  The Southern Christian Leadership Council (SCLC), the Congress of Racial Equality (CORE), and the Student Non-Violent Coordinating Committee (SNCC) all had formally adopted the policy of nonviolence.  Although it had no formal policy on it, the National Association for the Advancement of Colored People (NAACP) was understood also as committed to nonviolence.  And, of course, Martin Luther King used his prominent position in the movement to preach Christian nonviolence.

Within the movement, however, there was debate over King's message of nonviolence.  In 1964, Hartman Turnbow, a black Mississippi farmer and community leader, warned King:  "This nonviolent stuff ain't no good.  It'll get ya killed."  Hartman was known for driving away Klan night riders attacking his home by returning their gunfire, until the Klan retreated.  The morning after one exchange of gunfire, Turnbow told some civil rights organizers, "I wasn't being non-nonviolent.  I was just protecting my family."

Actually, King himself was known to have been well-armed for self-defense.  After an attack on his home in 1956, his friends noticed that guns were scattered all around his house.  Even when he was not carrying a gun himself, he was surrounded by people who were armed.  In 1966, when he and Stokely Carmichael led a march through Mississippi, they disagreed about the policy of nonviolence; but King allowed the Deacons for Defense to provide armed protection for the marchers.

The importance of armed self-defense for the civil rights movement has been largely ignored, because it contradicts the popular image of civil rights workers as Christ-like martyrs ready to be killed without defending themselves.  Charles Cobb Jr. has set the record straight in his new book--This Nonviolent Stuff'll Get You Killed: How Guns Made the Civil Rights Movement Possible (Basic Books, 2014).  Cobb is a journalist, and he was a field secretary for SNCC in Mississippi, so some of his writing is based on his experience.

As the title of his book indicates, Cobb's claim is that despite the commitment to nonviolent resistance as a tactic for the civil rights movement, the movement would have failed if participants had not been able to defend themselves with arms.  Another way of putting this is that when American blacks demanded their "civil rights," one of the most important right was the Second Amendment right to keep and bear arms.  Cobb quotes one civil rights leader--John R. "Hunter Bear" Salter--as saying in 1994: "I'm alive today because of the Second Amendment and the natural right to keep and bear arms."

Moreover, as this remark suggests, this right was understood as not just a constitutional right but also a natural or human right rooted in the natural human desire to protect one's life, one's family, and one's property from violent attack.  This is not necessarily contradictory to nonviolence if one understands that this is a right to exercise defensive violence rather than offensive violence as a deterrent to aggressive violence.  Richard Haley, CORE's southern regional director, defended the arrangement by which the Deacons for Defense provided armed escorts for CORE organizers as a way of supporting the policy of nonviolence.  "Protected nonviolence," he observed, "is apt to be more popular with the participants than unprotected."

One can also see here the natural ground of all human rights in what John Locke called "the executive power of the law of nature" as rooted in the naturally evolved animal inclination to ward off attacks and the resentment against unjust aggression.

Here is one of many good stories in Cobb's book illustrating the need for "protected nonviolence":


"[Margaret Block] stayed with eighty-six-year-old Janie Brewer, the matriarch of a large black family who lived with some of her children and grandchildren on the family farm. . . . 'Mrs. Brewer asked me what did SNCC mean,' Block would later recall, 'and I told her the Student Nonviolent Coordinating Committee.  And she stopped me.  [She said] 'You said nonviolent.  If somebody come at you, you ain't gonna do nothing.' . . . She pulled up a big ole rifle. . . . She kept a big rifle behind the chair. . . . [Mrs. Brewer said,] 'Shit, we ain't nonviolent.'  Ideas like this shaped Block's own feelings about nonviolence.  'Since I was living with [the Brewers],' she later explained, 'I had to be what the family was.'"

". . . One night in August 1964, after four of Mrs. Brewer's sons and another local resident tried to register to vote at the county courthouse in Sumner, Mississippi, whites in cars began circling the family's farmhouse.  This was not the first time such harassment had occurred; when SNCC staff took local people to attempt to register to vote, whites often followed the groups back home.  On this night, Janie Brewer had already been warned by her local sources of a possible attack, and she instructed her children, grandchildren, and SNCC guests to arm themselves and hide in the cotton fields.  Meanwhile she and Margaret Block began making Molotov cocktails in the kitchen, 'spilling gas everywhere,' Block remembered.  'And I'm like 'Damn if we get burned up in here, everyone was going to swear the Klan did it, and it's going to be Mrs. Brewer blowing us up.'  As the sheriff and a truckload of Klansmen approached the farmhouse, Brewer family members and some of the SNCC workers were still in the fields with rifles and shotguns.  Before the raiders reached the house, someone shone a floodlight on them.  Others fired into the air.  Brewer stood on the front porch ready to hurl a Molotov cocktail.  Everyone, including the sheriff, fled.  Night riders never returned to the Brewer farm."

Of course, armed self-defense cannot prevent people from being killed by hidden assassins.  King was assassinated in 1968 by a shooter hiding in a room across a street from King's motel.  Medgar Evers was assassinated in 1963 by a hidden killer who shot him as he stepped out of his car in the driveway of his home, and so he had no chance to get to the guns that he kept in his car and in his home.

Charlie Cobb Speaks About His Book