Abraham Lincoln's political ambition can be explained by evolutionary psychology as manifesting the universal human desires for social status and political rule that are part of our evolved human nature.  Human beings generally desire social recognition through comparative ranking.  For most human beings, their self-esteem depends on being esteemed by others whose judgments they respect.  For some human beings, this striving for status--for feeling important in one's group--becomes a striving for the prestige and dominance that comes from achieving supreme political rule.  Lincoln was that kind of human being.

There are at least twelve reasons for believing that striving for status is a natural desire that can be explained by evolutionary psychology.  (1) Since high status animals generally have better access to mating opportunities and valuable resources, natural selection and sexual selection favor the evolution of status striving.  (2) Status or dominance hierarchies appear among many non-human animals as shaped by their evolutionary history.  (3) Status ranking arises universally in all human societies and quickly among strangers who must form a group.  (4) Status ranking emerges spontaneously among infants and children.  (5) The concern for status elicits deep emotions of pride and shame.  (6) Status is associated with biochemical neurophysiology.  (7) There are both verbal and nonverbal indicators of dominance.  (8) The evolutionary theory of status as service for prestige has great explanatory power.  (9) Status striving persists throughout human history even as it varies in response to varying socioecological circumstances.  (10) The sexes differ in their status striving in ways that can be explained by evolutionary science.  (11) Although social status and political power seem different, the striving for political rule can be understood as a special form of striving for status.  (12) Lockean liberal social order, like that promoted by Lincoln, allows for status striving without tyrannical dominance by securing a balance between the one, the few, and the many in an egalitarian hierarchy with equality of opportunity and a circulation of elites.

I will write a series of posts on these twelve points.


1.  THE EVOLUTIONARY ADVANTAGES OF STATUS
As a general rule, male animals of high rank have more opportunities for sexual mating, and therefore higher reproductive success, than lower ranking males, although there are exceptions to this rule (Ellis 1995).  For example, in the captive colony of chimpanzees in the Arnhem Zoo observed by Frans de Waal, he saw that the alpha chimp sometimes had over 50 per cent of the copulations, and in one case over 75 per cent.  But he also saw that when Yeroen helped Nikkie become the alpha, Yeroen had the highest rate of copulations during Nikkie's first year of alpha status (de Waal 1982: 169; 1998: 164).

Anne Pusey and her colleagues determined the paternity for 34 offspring over a 22-year period for the chimpanzees in the Gombe preserve in Tanzania, and they concluded that male reproductive success did generally come from dominance rank creating priority of sexual access.  But they also saw that lower-ranking males sired more offspring than predicted.  They write: "our study confirms that male rank generally correlates with reproductive success.  However, younger males had the highest success per male, and low-ranking males successfully produced offspring more often than was predicted by the priority of access model.  Low-ranking fathers sired offspring with younger, less desirable females and appeared to use the consortship strategy more often than higher-ranking fathers" (Wroblewski et al. 2009: 880).  Among chimpanzees and other primates, females will secretly mate with subordinate males out of view of the dominant males (Manson 1992).

A dominance hierarchy is advantageous even for subordinates, because the loser in a fight risks injury and even death, and therefore it is better for a likely loser to defer to a higher ranking individual without a fight.  At the same time, a subordinate can look for circumstances in which a dominant individual is vulnerable to challenge.  Dominance hierarchies are not permanently fixed.

Moreover, the alpha position does not go just to the bigger and the stronger.  Particularly, among chimpanzees, rising to alpha dominance requires social intelligence in forming coalitions of supporters and in policing conflicts to secure peace.

That dominant males have increased sexual access to females is as true for humans as it is for non-human animals.  In polygynous societies that are highly stratified, the mating opportunities for those men at the top--kings, emperors, and despots--can be enormous.   Laura Betzig (1986; 1993) gathered evidence from the first six agrarian states in human history around the world--Mesopotamia, Egypt, imperial India, imperial China, Aztec Mexico, and Incan Peru.  She found a clear pattern in which the size of harems corresponded with the high rank of the men.  Kings and emperors could have hundreds or even thousands of wives.  Lesser princes could have less than a hundred.  Upper-class men could have a dozen or fewer.  Many lower class men might have only one or none.  The largest empire in human history was that of the Mongol rulers.  Genghis Khan established large territories for his sons who had large harems.  A few years ago, a study of blood samples from 16 populations from around the former Mongolian empire identified a chromosomal sign of ancestry from Mongol rulers that was shared by over 16 million men in that region (Zerjal et al. 2003).

Legally enforced monogamy in modern developed industrialized societies reduces the number of women a high status man can marry.  But it is still true in these societies that men with high status have greater sexual access to a larger number of women than do low-status men (Perusse 1993).  Although legally married to only one woman at a time, high-status men have more opportunities for extramarital sex and serial marriages.  Men with socially dominant personalities admit to having more affairs (Egan and Angus 2004).  They seek out women who are younger and thus more fertile (Grammer 1992).  High-status men also tend to marry women who are more physically attractive than do low-status men (Elder 1969; Taylor and Glenn 1976; Udry and Eckland 1984).  So as with other animals, there is a link between high male status and mating or reproductive success.  (Later, I will respond to the claim that the modern "demographic transition" has broken this link, in that high-status couples today show lower fertility rates.)


2.  ANIMAL DOMINANCE
Status hierarchies show up throughout the animal world, which indicates convergent evolution towards status ranking as an evolutionary adaptation that solves problems faced by many animals.  I have written about this in previous posts--for example, in defending Jordan Peterson's account of lobster hierarchy (here) and surveying the political history of chimpanzees (here and here).

The crayfish (or crawdads as we called them in Texas when I was growing up) gives us a good model of how dominance hierarchies form and operate.  These freshwater crustaceans look like little lobsters (to whom they are related), and they are abundant in streams in North America, particularly in the southeastern United States.  (In his great book on the crayfish, Thomas Henry Huxley thought the study of these fascinating animals could be an introduction to zoology in general.) 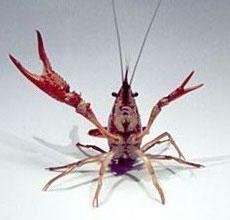 Crayfish fight over territory to determine who's the boss, the most intense fighting being over the burrows that provide them shelter from predators (such as fish and turtles) and from other crayfish that might cannibalize them (Barinaga 1996; Davis and Huber 2007; Edwards et al. 2003; Goessmann, Hemelrijk, and Huber 2000; Yeh, Fricke, and Edwards 1996).

Two crayfish will circle one another and size each other up.  They engage in ritualized threat displays.  Then they move towards one another.  The fight escalates until they use their claws to try to rip one another apart.  Finally, the loser retreats, slinking away to the periphery of the territory, while the winner struts around the center of the territory.  The next time they meet, there will be no fight, because the individual who lost the previous fight will withdraw in submission, and the individual that won the previous fight will assert his dominance over the subordinate.

There are at least four behavioral patterns here.  First, over a period of 10 minutes or so, recent winners will escalate their fights normally but will be less likely to retreat.  Second, over a longer period of hours to days, high-ranking individuals begin to escalate their fights more rapidly.  Third, those individuals who have experienced losses become increasingly likely to retreat.  Fourth, there is a bystander effect, in that those crayfish who have observed the fights will recognize the winners as dominant and the losers as subordinate, and the observers will be more likely to retreat from a fight with a dominant individual and more likely to threaten a subordinate individual.

This behavioral mechanism for establishing and maintaining a dominance hierarchy works in a similar way for many animal species:  the social experience of winning tends to make one individual dominant, and the social experience of losing tends to make another individual subordinate; and then the reputations of individuals for being dominant or subordinate spread through the group until everyone knows who ranks where in the hierarchy.  The hierarchy changes when changing circumstances allow some previously submissive individuals to challenge the previously dominant individuals (Hsu, Earley, and Wolf 2006).

Huxley, Thomas Henry. 1880. The Crayfish: An Introduction to the Study of Zoology. New York: D. Appleton.

Taylor, P. A., and N. D. Glenn. 1976. "The Utility of Education and Attractiveness for Females' Status Attainment through Marriage." American Sociological Review 41: 484-98.

Yeh, Shih-Rung, Russell A. Fricke, and Donald H. Edwards. 1996. "The Effect of Social Experience on Serotonergic Modulation of the Escape Circuit of Crayfish." Science 271: 366-69.