This is a clip from the movie "Spotlight," which won the Academy Award for Best Picture in 2015.  The movie tells the story of the Boston Globe reporters who broke the story in 2002 on how the Catholic Church in Boston and Cardinal Bernard Law covered up the priestly sexual abuse of children over 50 years or more.  This clip shows the scene in which the reporters are talking by telephone with Richard Sipe, a former Catholic monk and priest and psychotherapist who devoted much of his life studying celibacy and sexuality among priests, and who became a leading expert testifying in legal cases about clerical sexual abuse of minors.

The reporters tell him that they have found 13 priests in the Boston area who were guilty of sexual abuse.  They ask him whether that number seems right to him.  He responds by saying that by his estimate at least 6 percent of priests become pedophilic sexual abusers.  The reporters are shocked.  If that is true for Boston, that means that the number of abusive priests must around 90 rather than 13.  As they continue their investigation, they find that Sipe's prediction is correct--the number on their list goes up to 87.  (Eventually, the estimate of the proportion of Catholic priests in Boston who have sexually violated minors has been raised to 10%.)  The movie is accurate, because the Boston Globe reporters really did ask Sipe to fly to Boston and advise them during their investigation.

Sipe states his crucial idea at the beginning of his telephone conversation:


"If you really want to understand the crisis, you need to start with the celibacy requirement.  That was my first major finding.  Only 50 percent of the clergy are celibate.  Now, most of them are having sex with other adults.  But the fact remains that this creates a culture of secrecy that tolerates and even protects pedophiles."

This might seem to blame homosexuality for the sex abuse crisis in the Church, but as both Sipe and Martel indicate, most homosexuals have sex with other adults, and pedophilia is no more common among homosexuals than among heterosexuals.  But still it is true that the secrecy surrounding homosexuality in the Church inclines church leaders to coverup priestly sexual abuse of minors.

Sipe first revealed the failure of priestly celibacy in his book A Secret World: Sexuality and the Search for Celibacy (1990), which was based on interviewing over 1,500 people, most of them priests.  Sipe had himself been a celibate monk and priest for 18 years, before resigning his priesthood and marrying a former nun.  (This explains the Boston Globe editor in the film clip who wonders whether they can rely on the claims of a "hippie ex-priest who's shacking up with a nun.")

If this is a deep feature of human nature, and if the Christian doctrine of the incarnation of Jesus Christ means that God takes on the nature of man to become both fully God and fully man, then, Sipe suggests, we should see a natural human sexuality in Christ.  "Jesus Christ, celibate or not, could not have developed to maturity without erections and ejaculations, and there is no reason to think that these natural functions would have been devoid of sexual pleasure for him" (285).

There is some evidence that the depictions of Christ in Renaissance Art manifest His sexuality in the display of his genitals.  Leo Steinberg argued this in his book The Sexuality of Christ in Renaissance Art and in Modern Oblivion (University of Chicago Press, 1983, 1997).  Prior to the Renaissance, artists concentrated their attention on the head and shoulders of Christ, and they hid or covered up the lower parts of His body.  If Christ was shown partially naked, as in his crucifixion on the cross, His groin would be covered with a loin cloth.  This is odd, because the New Testament is clear that in His crucifixion, his body was stripped of all clothing.

In contrast to this prior artistic practice, here are some samples of the Renaissance art studied by Steinberg: 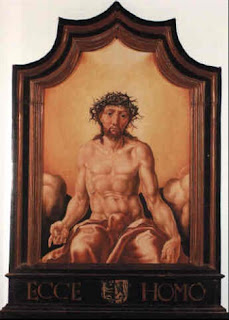 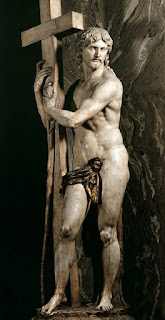 In the first picture, Mary's mother is fondling the penis of the baby Jesus.  In the second picture, the resurrected Jesus is shown with an erection.  The third is a picture of Michelangelo's sculpture Risen Christ, with a full penis and testicles.  The last picture shows what was done to Michelangelo's sculpture a few centuries later, when it was copied--the penis has been hidden by a bronze loincloth!

Before and after the Renaissance, artists were forbidden to show the penis and testicles of Christ, because this seemed shameful.  And even today when some contemporary artists have shown Christ with an erection, this is regarded as shocking and blasphemous.  But if one truly believes that Christ's incarnation requires that He fully take on the human nature of a man, would this not require that He have the sexual organs and desires of a real man?  The Renaissance artists thought so.

Michelangelo was a homosexual, and one can see in his artistic presentations of the male body a homoerotic pleasure in male beauty, including the bodily eroticism of Christ.  By supporting and displaying Michelangelo's art, the Catholic Church manifests a homoerotic aestheticism that contradicts its condemnation of homosexuality as sinful and unnatural.

Sipe has argued that the Catholic Church and Christianity generally lack a credible teaching about the sexual nature of human beings.  He has suggested that Christians would benefit from considering the sociobiological account of human sexual nature as put forth by Edward O. Wilson (in On Human Nature).  This sociobiological theory recognizes that the evolved sexual nature of human beings inclines them to sexual pleasure as a good in itself that is directed not just to procreation but also to bonding, and that homosexuality might be an evolved propensity for bonding.
Posted by Larry Arnhart at Friday, June 28, 2019