The Homosexuality of the Catholic Church (3): The Campy Humor of a Clerical Culture That Is Both Homophobic and Homoerotic


The Episcopal Installation of Georg Ganswein

The "Loving Friendship" of Pope Benedict XVI and Georg Ganswein 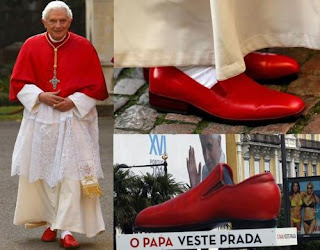 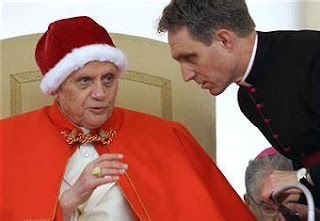 Benedict in His Red Ermine-Lined Bonnet

Benedict XVI loves ecclesiastical accessories--red shoes, red bonnets, gold watches and cuff-links and more.  Frederic Martel suggests that the best portrait of Benedict was drawn by Oscar Wilde in The Picture of Dorian Gray, where the homosexual dandy Dorian Gray develops a love for the priestly vestments of the Catholic Church. "In the mystic offices to which such things were put," Wilde observed, "there was something that quickened his imagination."

Benedict also loves handsome young men--such as his intimate friend Georg Ganswein, who is 30 years younger than he.  He promoted his friend, even making him an archbishop.  And unlike any modern pope, he presided over an elaborate liturgical celebration--a coronation mass--for Georg's consecration as archbishop on Epiphany, January 6, 2013.  It lasted almost three hours.  It can be seen in the YouTube video above.  Some in the Vatican said that this was the most beautiful liturgical ceremony they had ever seen.  One high point was when the pope spent a long time stroking Georg's hair.

Watching the video of this ceremony, Martel felt a loving admiration for Benedict's daring display of his homoeroticism:


"In his way, Joseph Ratzinger remained loyal to his singleton, in spite of the frantic warnings of the Curia.  This high mass was a magnificent statement.  And that day, he was radiant.  His restrained smile was a marvel.  Having drained the chalice to the dregs, he was not afraid of taking another drink from it.  He is handsome.  He is proud.  Magnetized by his own daring, he has won.  Seeing him again in the video, so superbly dramatic, I have never loved him as much as I do in that moment" (444).

This confirmed the pope's reputation as the "liturgy queen," a term first used by Mark Jordan in his book The Silence of Sodom, his account of the paradox that the clerical culture of the Church is at once both homophobic in its moral teaching and homoerotic in its liturgical aesthetic.

One month after his coronation of Georg, Benedict announced that he was resigning as pope, which no pope had done in over a thousand years.  Georg is now both personal secretary to the retired pope and prefect of the pontifical house of Pope Francis.

Martel recounts the many rumors about Benedict and Georg being lovers.  "These rumors and gossip, which were regularly passed on to me at the Vatican without ever being proven, all focus on the same thing: an emotional relationship" (438).  But "without ever being proven"!  That's the complaint of Martel's critics--that his book is full of unproven rumors of homosexuality passed on in a campy gay humorous style that many critics find offensive.

It should be noted, however, that Martel stresses that the speculation about Benedict and Georg's active homosexuality is largely discredited by the lack of any clear proof.  The "most likely hypothesis," Martel suggests, is that Benedict and Georg have a "loving friendship" in the ancient and medieval tradition of Platonic love.  We "might hypothesize that homophilia was the thorn in Joseph Ratzinger's flesh," just as it was for Saint Paul (447).  His latent homosexuality has been sublimated into clerical vocation, philosophical research, literary and musical aesthetic, extravagant clothing, and the beauty of boys.


"If this hypothesis is true--and how can we know?--it may be that Ratzinger was more sincere than LGBT activists believed when they rebuked him so often for being 'in the closet.'  According to this view, Benedict XVI has no other ambition than to impose his own virtues on others and, faithful to his own vow of chastity, he was only asking homosexuals to do as he did" (441).

Remember that it was Ratzinger who promoted the teaching that men with homosexual "inclinations" might be tolerated by the Church as long as they refrained from homosexual "acts," and thus were chaste in their love for other men.  This is what Martel calls the "Maritain Code."

In his attack on Martel's book in First Things, Paul Mankowski complains that Martel is so blinded by his bias that he cannot see anyone in the Church who sincerely believes the Catholic teaching on homosexuality as "intrinsically disordered."  "Martel's antipathies are too strong to allow him to see and recognize even trivial exceptions to his laws.  His universe admits no such being as a chaste person, hetero- or homosexual, who authentically believes the Catholic Church teaches truth; it is therefore no surprise that he failed to find such a man within the Vatican."

But this is not true, because Martel sees all those who follow the "Maritain Code"--including Benedict--as homophilic Catholics who accept the condemnation of practicing homosexuality, and who show their chaste homophilia in abstaining from homosexual acts, while channeling their homoerotic longings into a Platonic love of beauty and God.

Perhaps there is no hypocrisy when Catholics like Benedict live lives that are both homophobic and homoerotic, as long as their homoerotic longings escape the immorality of homosexual acts.   But this depends on the distinction first made by Cardinal Ratzinger between homosexual inclinations and homosexual acts.  Oddly, Ratzinger denied the moral relevance of this distinction in the "Letter to the Bishops of the Catholic Church on the Pastoral Care of Homosexual Persons," which was issued by the Congregation for the Doctrine of the Faith in 1986.  The Letter declared: "Although the particular inclination of the homosexual person is not a sin, it is a more or less strong tendency ordered toward an intrinsic moral evil; and thus the inclination itself must be seen as an objective disorder" (sec. 3).

If the Catholic Church is really teaching that the homosexual inclination itself is an "objective disorder," then it would seem that Catholics like Benedict who try to live lives of chaste homoeroticism through "loving friendships" are hypocrites in failing to live up to the sexual morality that they profess to believe.
Posted by Larry Arnhart at Tuesday, June 25, 2019

If the Catholic Church is really teaching that the homosexual inclination itself is an "objective disorder," then it would seem that Catholics like Benedict who try to live lives of chaste homoeroticism through "loving friendships" are hypocrites in failing to live up to the sexual morality that they profess to believe.


Or perhaps they are living the best lives they can given their "disorder". Taking lemons and making lemonade. Like a person with a compulsion to burn things who resists the compulsion and instead works to make buildings fire resistant--while enjoying harmless fires in his fireplace (and maybe even imagining that they are whole cities burning).