The Neural Circuitry of Parental Care in Mice and Humans

At the end of my last post, I said that Paul Zak's studies of oxytocin's influence on human social behavior were too shallow, because they did not reveal the complexity of exactly where, when, and how oxytocin acts in the brain.  This is an important point, because biological explanations of human life are often criticized for being crudely simplistic in their reductionism, and Zak's exaggerated claims for oxytocin as the "moral molecule" seem to confirm that charge.  Actually, good biological explanations for animal behavior must always be complicated in that there are always multiple causes interacting in complex ways at multiple levels of explanation.

As an example, consider how oxytocin contributes to the explanation of parental care as one of the 20 natural desires that I first listed in Darwinian Natural Right, published in 1998. In my chapter on "Parent and Child," I agreed with biological anthropologists like Aristotle, Charles Darwin, and Sarah Hrdy who argue that the social nature of human beings is a natural extension of the maternal care of children.  The maternal love for children is the model for, and natural origin of, all forms of love, friendship, and affiliative behavior.

The Darwinian biology of animal behavior can support this conclusion by explaining parental care at four levels of analysis: (1) functional causes, (2) phylogenetic causes, (3) developmental causes, and (4) immediate causes.  Human parental care has a functional cause in that it has been favored by natural selection as serving the survival and reproductive success of human beings.  It has a phylogenetic cause in that it has emerged from an evolutionary history that human beings share with other primates and other mammals.  It has a developmental cause in that the desire to care for children emerges as an outcome of the normal development of children into adults.  And, finally, it has immediate causes in that it arises as a response to physical and social stimuli in the environment that elicit processing in the neural circuitry in the brain that produces parental caregiving behavior.

A full explanation of parental care--and of all the other natural desires--would have to move through these four levels, with each level requiring a complex explanation.  Although the complexity here is so great that we will probably never achieve full scientific explanations, we can still make progress.

But now, 20 years after the publication of Darwinian Natural Right, we know much more about the biological causality of parental care, in which oxytocin and vasopressin act only through complex interactions with many other factors.  Last year, a team led by Catherine Dulac at Harvard University published the first description of the neural circuitry in the brains of mice supporting parental care (Kohl et al. 2018; Kohl 2018).  A summary of their study can be found here. 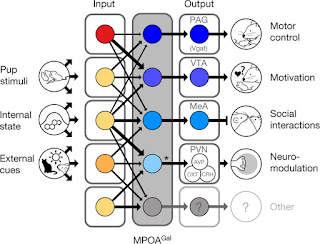 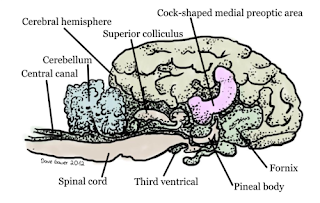 Medial Preoptic Area (MPOA) of the Hypothalamus in the Mouse Brain 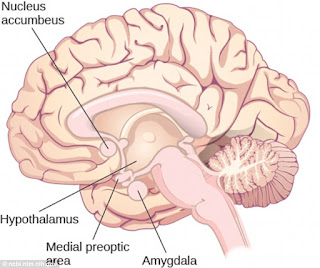 Medial Preoptic Area of the Hypothalamus in the Human Brain

In 2014, Dulac and her team found that MPOA neurons expressing the neuropeptide galanin are crucial for parental behavior in both female and male mice.  The question then was how such a small population of neurons--10,000 out of a total of 100 million in the mouse brain--can control such a complex behavior as parental care, which includes a wide repertoire of behavior--retrieving pups to the nest, grooming them, female nursing of them, attentiveness to infant stimuli, diverting attention from nonparental behaviors such as mating.  Moreover, there are differences between males and females.  Virgin male mice typically attack pups, and they engage in parental care only a few weeks after mating with the mother.  By contrast, female mice exhibit maternal caregiving regardless of whether they have pups of their own.

Dulac and her team found that the galanin-producing neurons in the MPOA are at the hub of an integrated circuitry, receiving inputs from about 20 brain areas and sending out projections to a similar number of areas.  They found that different pools of neurons serve distinct elements of parental care.  Some pools control actions such as grooming of pups, so that when the researchers activated these neurons, even virgin males, who normally attack rather than nurture pups, would groom them.  Other pools send signals to the brain's reward center to motivate parental care.  Other pools project to the amygdala, which processes emotion.  Other pools modulate the production of oxytocin, vasopressin, and other hormones in the hypothalamus.  Thus, this circuitry integrates distinct sets of cells to stimulate the behavioral, motivational, emotional, and hormonal changes involved in the parental care of young.

This is all very complex, but it's even more complex when one sees that this is only the level of immediate or proximate causes, and that a full biological explanation of the natural desire for parental care requires understanding not only these immediate causes in the brain, but also the developmental, phylogenetic, and functional causes of parental care.

The complexity increases when one realizes that parental care varies according to differences in the individual personalities of animals and in the cultural history of animal groups.