Bees Know Nothing: The Evolutionary Psychology of Zero and Plantinga's Evolutionary Argument Against Naturalism

I have written some posts answering Plantinga's evolutionary argument against naturalism (here and here).  Plantinga claims that the theistic doctrine of the human mind created by God in His image provides the necessary support for the validity of human thought, including the validity of natural science.  If we embrace Naturalism--the view that nothing exists except Nature, and so there is no God or nothing like God (like Plato's Idea of the Good)--we are caught in self-contradiction: if human thought originated not from a divine Mind but from the irrational causes of Nature, then we cannot trust our minds as reliable sources of true beliefs, and thus we cannot trust our belief in Naturalism as being true.  Naturalism thus destroys itself by destroying the rationality of believing in Naturalism, or anything else.  Insofar as science--including evolutionary science--depends on the validity of human thought, and insofar as theism is the indispensable support for trusting in the validity of human thought, science is not only compatible with theism, science depends upon theism.

Against this line of reasoning, I have argued that the evidence of evolutionary history suggests that evolution produces cognitive faculties that are reliable but fallible.  The mental abilities of animals, including human beings, are fallible because evolution produces mental adaptations that are good enough (for survival and reproduction) but not perfect, and this results in the mental fallibility that is familiar to us.  But despite this fallibility, the mental faculties of animals cannot be absolutely unreliable or delusional.

Plantinga concedes this point when he says that in the evolution of animals, "adaptive behavior requires accurate indicators."  So, for example, a frog must have sensory equipment that allows him to accurate detect flies so that he can catch them with his tongue.  A frog with a brain prone to put him into a completely delusional view of the world around him would not survive and reproduce.

Another good example of the adaptive value of "accurate indicators" is the waggle dance of honey bees.  The accuracy of the bee's waggle dance in communicating with other bees shows the capacity for natural evolution--even without any divine guidance--to produce animal cognition and communication that gives the animal an accurate--even if fallible--representation of the world as it pertains to the needs of the animal.

Last year, we saw another example of this from the honey bees when scientists published research showing that bees have some knowledge of arithmetic as even including the concept of zero, which is a difficult concept even for human beings as indicated by the fact that some human civilizations have not had the concept of zero as a number.  The difficulty of this concept should be clear: How can "nothing" be "something"?  How can the absence of quantity be quantifiable or countable? 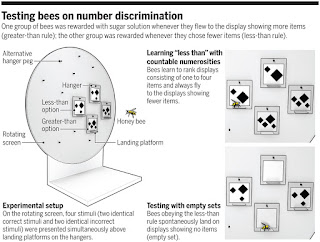 Two groups of 10 bees each were lured to a rotating screen with four panels showing different numbers of black shapes.  Half of the bees were rewarded with a sugar solution for flying to the display showing a greater number of items, while the other half were rewarded for flying to the display showing a lesser number of items.  The bees who were taught the "less than" rule were then tested with some panels having multiple items and others being blank.  Most of the bees flew to the blank panels, suggesting that they somehow understood that the blank panel was "less than" the panels with one or more shapes.  This seemed to show some understanding of the concept of zero.

Until about 50 years ago, scientists generally assumed that the capacity for counting was uniquely human.  But then experiments showed that crows and ravens could carry out simple numerical tasks.  And now there is plenty of evidence that many different species of animals have some number sense, although they do not have the human capacity for comprehending mathematical symbolism.

In humans and other primates, the core areas of the brain for processing numerical quantity are in the left and right parietal lobes and the left frontal lobe (Butterworth et al. 2017; Butterworth 2017).  The abnormal development of the parietal lobes is associated with dyscalculia, a congenital disability in learning about numbers and arithmetic (Butterworth et al. 2011).  Given the small size of the bee brain--about the size of a sesame seed--it is remarkable that bees have any capacity for counting at all. 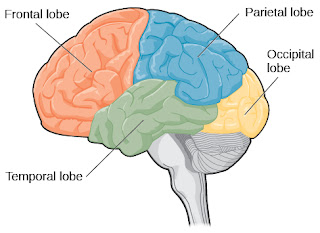 That such a wide range of species have some number sense suggests that this is a case of convergent evolution of numerical capacity.  Different species that are very distant from one another phylogenetically have converged on the same adaptive solution to computational problems posed by their socioecological environments: being able to count the number of items in a set has been favored by natural selection because this mental capacity has enhanced the chances of survival and reproduction.

This, then, is another illustration of how the evolutionary adaptation of animal minds really does require "accurate indicators" of the world, and so Plantinga is wrong in assuming that a natural process of evolution unguided by the Mind of the Creator could never produce minds capable of generating true beliefs about the world.

But, still, the claim that bees understand the concept of zero is puzzling.  After all, doesn't the fact that the concept of zero has appeared only recently in some human civilizations suggest that conceptualizing numbers is a cultural invention rather than a purely biological activity, and that this depends on a uniquely human capacity for symbolic abstraction?

That will be the question for my next post.