Flies Are Cultural Conformists in Their Sexual Preferences: The Biology of Cultural and Biographical History

In his biological writings, Aristotle identified human beings as by nature political animals, and he compared them with other political animals such as ants, bees, wasps, and cranes.  Thomas Hobbes denied this by insisting that Aristotle failed to see the radical separation between animal societies as founded on natural instinct and human societies as founded on social learning.  Human beings cannot be political animals by nature, Hobbes explained, because "man is made fit for society not by nature but by education" (De Cive, ch. 1).  Hobbes thus supported the modern notion of culture as the uniquely human realm of social learning through which human beings express their rational humanity by transcending their natural animality.

Unlike Hobbes, Aristotle  saw no unbridgeable gulf between animal instinct and human learning.  In his biological research, he observed that almost all animals have some natural instincts for social learning, and some are intelligent enough to live as social and political animals.  What distinguishes human beings is that they are more political than other political animals because of the human capacities for language, conceptual abstraction, and shared intentionality that allow human beings to organize their collective life around shared symbolic norms of authority and justice.

Over the past two hundred years, it has been common for scholars to assume that Hobbes was right in claiming that human beings are unique in being the only cultural animals, and therefore that the "human sciences" (Geisteswissenschaften) as the study of cultural history must be separated from the "natural sciences" (Naturwissenschaften) as the study of natural phenomena.  If this is so, then the evolutionary biology of human nature has no application to human social and political life.

But over the past fifty years, evolutionary scientists have gathered ever increasing evidence--from both observational and experimental studies of animal behavior--that many animal species show social learning and cultural traditions, and therefore Aristotle was right.

Recently, for example, researchers have shown that even fruitflies are cultural animals (Danchin et al. 2018; Whiten 2018).  Female fruitflies tend to conform to the mating preferences they observe in other females, which generates cultural traditions that are passed on to others through social learning.  The researchers placed virgin female fruitflies in a hexagonal chamber, surrounded by six compartments in each of which they could see a female fly mating with a male dusted by either pink or green coloring, with another male of the alternative color standing nearby.  Some females saw that all six of the mating males were pink.  Others saw that all were green.  Others saw different proportions of pink versus green males mating. 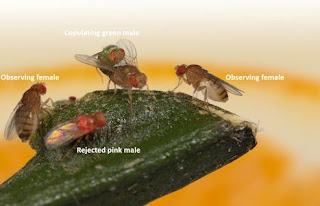 Two Females Watch a Copulating Green Male, While a Pink Male Is Rejected

It was observed that the virgin females who had seen a majority of females mating with pink males preferred to mate with pink males; and similarly those who had seen most females mating with green males preferred to mate with green males.  Moreover, this mating preference was passed on to later generations of females as a culturally inherited tradition.

So now fruitflies are added to a long and growing list of animals identified by scientists today as showing cultural behavior.  The list includes many mammalian, avian, fish, and insect species (Galef and Whiten 2017; Whiten et al. 2017).  Actually, however, this is only a rediscovery of what Aristotle reported long ago in his biological writings.

Evolutionary science needs to explain the complex interaction of these systems of inheritance.  This is hard to do, as indicated by the recent work on gene-culture coevolution.  It's hard to define and identity the units of culture.  Richard Dawkins suggested that we might speak of cultural "memes" as analogous to organic "genes," but there is little agreement as to what should count as memes.

It's also hard to discern the connections between genes and memes, because little is known about how exactly genes influence behavior, or how exactly behavior might influence gene expression and transmission.

There are only a few examples of well-understood gene-culture coevolution.  One of the most famous cases is the evolution of lactase persistence.  The production of the enzyme lactase in the gut is necessary for the digestion of the milk sugar lactose.  This enzyme is produced in human infants so that they can digest the lactose in their mother's milk.  But in most human adults, the production of lactase is shut down, and so they suffer severe indigestion from the consumption of milk.  And yet lactase persistence--the production of lactase in adulthood--is common among those human beings with a northern and western European ancestry and those from some pastoralist groups in Africa, the Middle East, and southern Asia.  The likely explanation for this is that lactase persistence evolved among dairying farmers around 7,500 years ago as a genetic adaptation to dairying culture (Itan et al. 2009).  Geneticists have identified a particular genetic variation that supports lactase persistence, and they can see that this genetic variation correlates with the cultural evolution of dairying.  So here is a clear case of where a cultural tradition created an environment that favored genetic change that would be adaptive.

It's unfortunate that Darwin did not understand this, because the mysterious intestinal illness from which he suffered throughout his life was probably a result of his being lactose intolerant.  Medical researchers studying Darwin's records of his illness have noticed that it always arose a few hours after eating dairy foods (Campbell and Matthews 2005).  All of his symptoms--vomiting, gut pain, headaches, tiredness, and depression--match the effects of lactose intolerance.

There are very few studies of nonhuman animal culture that can show this same clarity in the mechanism of gene-culture evolution.  One case that comes close is the study of animal culture among the killer whales or orcas.  Orcas stretch from the Arctic to the Antarctic, and they diets range over birds, fish, mammals, and reptiles.  But as individuals, they belong to groups with different specialized diets and hunting traditions that are passed down over generations.  These groups also show variations in their cultural traditions for vocal displays, habitat use, play, and migration routes.  Some of the scientists studying them have seen stable genetic variation in each group that correlates with their cultural traditions, which suggests gene-culture coevolution (Foote et al. 2016; Whitehead 2017).

Moreover, the study of animal culture shows that cultural traditions originate from innovations initiated by particular individuals that have been so successful that they have been passed on by social learning to other individuals and to subsequent generations.  Consequently, the study of animal behavior must include the study of the individual personalities of the animals responsible for cultural innovations.  For example, scientists have observed that among wild capuchin monkeys some individuals are better than others at social invention and innovation (Perry et al. 2017).  In fact, most of the detailed histories of particular animal groups--such as Jane Goodall's The Chimpanzees of Gombe--include biographical histories of the individual animals that have shaped the history of the group.