The Atlatl (Spear Thrower) in the Cultural Evolution of Lockean Liberalism

Weapon Masters Videos on the Atlatl 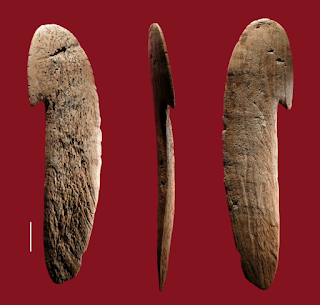 A Fragment of an Atlatl Dated between 15.2-15.9 Thousand Years Ago Made of Engraved Antler with the Hook Still Intact, from El Miron Cave, Cantabria, Spain (Morales and Straus 2008)

Beginning about 1.8 million years ago, our human ancestors could enforce social cooperation by threatening cheaters and free riders with killing from a distance through throwing rocks or javelins.  The effective lethal range of these weapons is about fifteen meters.  Paul Bingham estimates that with such weapons up to about ninety people could encircle a small group of free riders or cheaters while remaining in range.  In this way, Locke's executive power of the law of nature could coercively enforce social cooperation among no more than ninety individuals.  And so, for about 1.7 million years, that was the limit for human non-kin social cooperation, because the scale of their cooperation was limited by the range of their weapons for remote killing.

Then about 50,000 to 30,000 years ago, something happened to produce what paleoanthropologists call "behaviorally modern humans" (Bar-Yosef 2002; Hill et al. 2009; Klein 2009).  Their anatomy was the same as earlier humans, but their behavior showed a stunning increase in their mental complexity and abstraction.  They were able to migrate out of Africa, and by about 20,000 years ago, they had migrated throughout Eurasia, Australia, North America, and South America.  This began the human dominance of the whole planet. Their tools become more complex and sophisticated.  Their ornaments became more abstract and esthetically evocative.  Their art showed a distinctly human sense of beauty, as in this cave art: 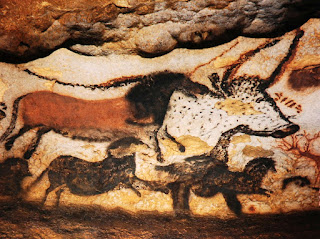 There was also an expansion in the scale of social cooperation, as indicated by large "public works" such as huge earthen mounds and by evidence for long-distance trade networks.  If the scale of social cooperation depends on the range of weaponry for remote killing, then there must have been some new weapon with a range greater than that for thrown rocks or javelins.  And, indeed, there is evidence for the first appearance of atlatls (the Aztec word for spear throwers).

An atlatl amplifies the human throwing motion so that the bolt (or dart) is launched to greater distances, higher velocities, and more penetrating power than thrown stones or hand thrown spears.  Originally, the atlatl was invented by humans to be a weapon for hunting wild game, but then it could be used as a weapon against other humans in war or to punish cheaters and free riders, and thus to coercively enforce a larger scale of cooperation.  Bingham estimates that while thrown stones and javelins could enforce cooperation among up to 90 individuals, atlatls could expand this tenfold up to 900 individuals.

Bingham argues that this expanded the range of cooperation because this new weapon allowed law enforcement to encompass a larger group of people, which then increased the scale of information sharing.  This increase in cultural information sharing could then cause all of the other increases in inventiveness and complexity that characterize the behaviorally human revolution--including more complex tools, abstract art, and more intricate human artifacts.

The throwing stick and the bolt shaft of the atlatl are normally made mostly of wood and therefore likely to perish over thousands of years.  But some apparently atlatl fragments made of bone, antler, or ivory have been dated to around 16-17 thousand years ago--such as the fragment from El Miron Cave pictured above (O'Driscoll and Thompson 2018; Morales and Straus 2008).

The oldest indirect evidence of atlatls come from the sharp stone points that have the shape and size that identify them as atlatl bolt points rather than thrusting spear points or arrow points.  Thrusting spear points are larger and heavier than bolt points, which are larger than arrow points.  Some of the oldest bolt points have been dated at 50 to 40 thousand years ago (O'Driscoll and Thompson 2018; Shea 2006; Shea and Sisk 2010).

John Shea--Bingham's colleague at Stony Brook University--sees some evidence of bolt points in sub-Saharan Africa as early as 100,000 years ago, although they become more common after 50,000 years ago.  Shea admits, however, that he is baffled by the fact that historic hunter-gatherers in Africa have not used the atlatl.  It's perplexing if atlatls were used in prehistoric Africa but not later.

Shea thinks Bingham has part of the puzzle for human evolution, but not all.  Shea thinks the technology of the atlatl is not enough to explain human complexity, and that spoken language is a crucial factor.  By contrast, Bingham thinks the evolution of human non-kin cooperation supported by coercive weaponry to manage the problem of conflicts of interest created the conditions for the evolution of language: non-kin cooperation was the cause, language was the effect (Bingham and Souza 2009, 240-76).  I am inclined to agree with Shea that while the technology of projectile weapons is one critical factor in shaping human evolution--for the reasons indicated by Bingham--it cannot be the only prime cause.

Here's a video of John Shea showing how ancient atlatls were made and used:

One of the most conspicuous signs of behaviorally modern humans is the construction of huge earthen mounds that apparently were used for local gatherings, perhaps seasonally.  Here is one of the Hopewell mounds in Ohio: 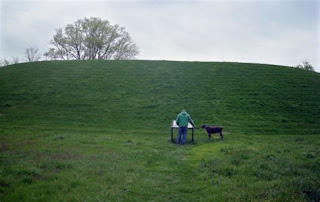 As many as one thousand people could have gathered on this mound.  Although archaeologists continue to debate the functions of these mounds, they seem to be designed for local gatherings.  And since Hopewell societies were connected by extensive trading networks, people were probably meeting at these spots for trade--looking for mates, goods, services, and information.  Such centers of commercial activity would have needed law enforcement to sustain peaceful exchange by punishing thieves and cheaters.  The Hopewell culture flourished from 100 BCE to 500 CE, prior to the arrival of the bow and arrow, so their best weapon for law enforcement would have been the atlatl, and the range of the atlatl was great enough to sustain a scale of cooperation up to one thousand people. 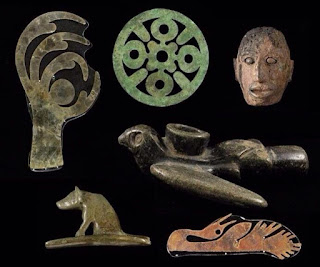 These symbolic artifacts were clearly traded over vast distances, and so they probably functioned as currency for exchange.  Symbolic objects can serve as a form of money because they are precious and difficult to counterfeit.  They can also be worn as ornaments or be signs of status, just as gold, silver, and diamonds can be both currency and valuable ornaments in our culture.

The economic trade in such valuable objects would have been impossible without some coercive law enforcement with weapons like the atlatl to punish thieves and cheaters and thus securing the rights of property and contract.

The evidence for such trade over 100,000 years or more refutes Friedrich Hayek's claim that market exchange is a recent invention in human history.  On the contrary, we might conclude that Adam Smith was right in seeing that human beings are economic animals who naturally strive to "truck, barter, and exchange."

Some of my posts responding to Hayek and defending the idea that the extended order of liberal capitalism appeals to our evolved human nature can be found here, here, and here.

Bingham, Paul, and Joanne Souza. 2009. Death from a Distance and the Birth of a Humane Universe. Charleston, SC: BookSurge.