Elite Body Armor in the Evolution of Archaic States 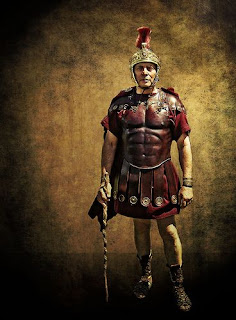 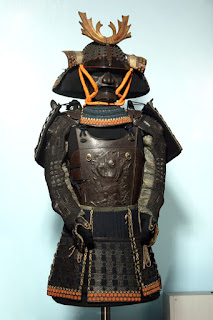 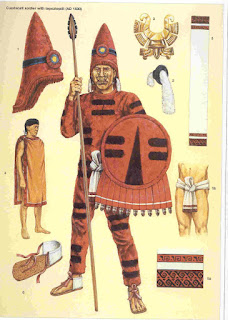 The Earliest Pictorial of Armored, Helmeted Warriors in Phalanx Formation on the Sumerian Stele of Vultures (2525 BC)


The Stele of Vultures is a stone slab erected by King Eannatum of Lagash to commemorate his defeat of the king of Umma in one of the many wars fought by states in ancient Mesopotamia--what is now southern Iraq.  It is called the Stele of Vultures because it depicted vultures tearing at the corpses of the defeated soldiers.  In the picture sketched above, it depicts armored and helmeted soldiers in a phalanx formation, armed with spears, trampling their opponents.  Since fighting in a phalanx requires special training and discipline, these are probably professional soldiers; and so this could be the first evidence in history of a standing professional army.  Prior to this, Neolithic armies were composed of men brought together to fight in some temporary crisis, and then they disbanded once the fighting was over.  We also know from other cuneiform tablets that some of the kings of the Mesopotamian city-states paid to maintain 600-700 full-time soldiers.  This state-supported military maintenance included expensive helmets, armor, weapons, and chariots.  The helmets were made of copper with a leather liner underneath.  The chariot was a Sumerian invention that became a major part of the military technology of Eurasian archaic states.  (See Richard A. Gabriel and Karen S. Metz, A Short History of War: The Evolution of Warfare and Weapons [Carlisle Barracks, PA: Strategic Studies Institute, Army War College, 1992], which is available online.)

Prior to this, for hundreds of thousands of years of human evolution, human beings lived in stateless societies that were roughly egalitarian and democratic, in that most of the adult males had equal access to coercive power, because throwing stones, spear-throwers, and bows and arrows were easily available; and so the great majority of individuals could use their coercive threat to prevent exploitative rule by an elite few.  In the Neolithic Chiefdoms, there was some status ranking, and prominent men might lead a society in war, but leaders who sought tyrannical dominance could be checked by the coercive power of the multitude of individuals resisting exploitation.

Beginning around 5,200 BC, there is evidence in Mesopotamia for villages and small towns of sedentary foragers, farmers, and pastoralists who managed their collective affairs and trade with the outside world.  So even after the development of agriculture, with the farming of domesticated plants and the herding of domesticated animals, human beings still lived in societies without bureaucratic states.

The first state in Mesopotamia--showing a state apparatus with walls, tax collectors, bureaucratic officials, and a priestly establishments--was probably Uruk.  A city wall was first built at Uruk around 3,200 BC.  By then Uruk was probably the largest city in the world, with a population between 25,000 and 50,000.

Following the model of Uruk, roughly twenty other city-states arose in the Mesopotamian alluvium.  Now it seemed that the liberty and equality of the state of nature had been lost as many people found themselves in organized state societies oppressed by slavery, forced labor, military conscription, and exploitative taxes.

According to Paul Bingham, the one primary cause for this move from egalitarian and democratic stateless societies to elite ruled archaic states is the new military technology of elite body armor.  Unlike stones, spear-throwers, and bows, specialized body armor is expensive and thus controlled by small groups of elite individuals.  Bingham's evidence for this is that in every archaic state--ancient Mesopotamian states, ancient Rome, ancient Inca state, ancient Mayans, ancient Aztecs, Imperial Japan, the Hawaiian states--coercive power is concentrated in elite armored warriors who are less than 10% of the male population.  Some evidence does not seem to conform to this pattern, however. Ancient Egypt was one of the earliest archaic states, and yet there is little evidence that Egyptian soldiers were heavily armored.  (See John Coleman Darnell and Colleen Manassa, Tutankhamun's Armies: Battle and Conquest During Ancient Egypt's Late Eighteenth Dynasty [Hoboken, NJ: John Wiley, 2007], pp. 81-83.)

Archaic states have hierarchical societies in which a small elite at the top rule for their self-interest in exploiting the majority of the people through enslavement, forced labor, conscription, and oppressive taxation.  Nevertheless, when these archaic states became too tyrannical, the state subjects could flee or rebel and thus bring the disintegration of the state, which confirms Locke's account of how people through resistance and rebellion against governmental tyranny reclaim their natural freedom.

I have written about the evidence for this in ancient Mesopotamia here and here.  This explains why Pierre Goodrich chose the Sumerian word amagi--the first word in the oldest written language for "liberty"--as the logo for the Liberty Fund.  The greatest threat to human liberty--the emergence of the archaic state in Mesopotamia--elicits the natural human resistance to tyranny that manifests the natural human longing for liberty that was shaped in the evolutionary state of nature.
Posted by Larry Arnhart at Thursday, October 25, 2018