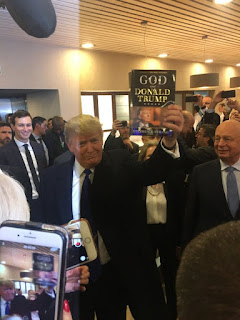 Lance Wallnau Hears from God in May of 2016 that the 45th Chapter of Isaiah Identifies Trump as the 45h President, God's New Cyrus

If America is a Christian nation chosen by God, and if God providentially enters history to carry out his purposes, is it possible that the miracle of Donald Trump's election in 2016 was an act of God to save America from its decline into secularism?  Many American evangelicals say yes, and they point to the evangelical prophecies of Trump's victory, when almost no one thought he could win.

Although most of us might be skeptical of this, it is true that almost a third of the votes cast for Trump came from evangelical Christians, most of them in the states that were crucial for Trump's electoral college victory.  If many of these evangelical Trump voters were motivated by their belief that Trump really was God's chosen one, then it would seem that this was a self-fulfilling prophecy.

We now have the story of how this prophetic vision of God's providential intervention changed American history in the new book by Stephen Strang--God and Donald Trump--which has been endorsed by evangelical politicians such as Mike Huckebee and Michelle Bachmann.  In the picture above, you can see Trump proudly waving his copy of the book at the World Economic Forum in Davos.  Strang is a leading Pentecostal evangelical who publishes Charisma magazine, and part of his story is how the Pentecostals were the first Christians to support Trump.  As early as 2003, Paula White Cain, a Pentecostal television minister, became Trump's spiritual advisor after he had seen her TV show.

Here is a video of Cain and other charismatic ministers laying hands on and praying for Trump in his Trump Tower office on September 30, 2015, six months before the first presidential primaries:

This appeals to the grandiose narcissism of Trump's chimpanzee personality, which has been a topic of my post here.

First, they must argue that the American founders established America as a Christian nation specially chosen by God to be under his providential care.  So, Strang refers to "Benjamin Franklin's surprising declaration during the Constitutional Convention of 1787, when he said famously, 'God governs in the affairs of men'" (xiv).  And Strang says that the purpose of his book in telling the story of God's intervention in the election of 2016 is to confirm this idea "that God is involved in the affairs of men" (184).

Remarkably, however, Strang is silent about the circumstances of Franklin's declaration at the Constitutional Convention.  Franklin was proposing that the Convention should have daily prayers and Bible reading so that God would providentially intervene to help them write the Constitution.  The members of the Convention refused to even allow a vote on his proposal, and Alexander Hamilton quipped that they "had no need for foreign aid"!  I have written about this previously here.

Christians like Strang must also argue that identifying Trump as God's chosen one is consistent with the Bible.  Is there any evidence in the Bible that God would choose someone like Trump--who is not a Christian--to act as the savior of God's people?  Well, yes, as Lance Wallnau explains in the video above, God could chose Trump just as God chose the pagan Persian Cyrus as his "anointed one" or "messiah" to liberate the people of Israel from their Babylonian captivity.  In fact, God spoke to Wallnau and noted the connection between the 45th chapter of Isaiah and Trump becoming the 45th president of the United States.  In that chapter of Isaiah, God speaks to Cyrus as his "anointed one," although "you do not know me."  Although Cyrus does not worship Yahweh--he worships other gods--Yahweh can use him for his purposes.  Likewise, then, God could use Trump to bring America back to God even if Trump himself is not a believer.  And that is what many evangelicals decided: Trump's sinful character and lack of any clear belief in Christianity need not weaken his claim to be chosen by God to carry out God's plan for saving America from Hillary Clinton!

There is a problem here, however, that Strang briefly mentions and then passes over without resolving it (75-76).  As the evangelical Tom Horn has pointed out, God used the pagan leader Nebuchadnezzar as "the servant of the Most High God" to punish Judah by taking them into the very Babylonian captivity from which Cyrus would later liberate them (Jeremiah 25).  So if God is using Trump, we can't be sure whether Trump is to be America's savior (like Cyrus) or America's punishment (like Nebuchadnezzar).  And indeed many Christians who refused to vote for Trump worry that the Christians supporting Trump are showing a shameless lack of moral authority.  Is God punishing these Christians for their hypocrisy?

There is another problem for the Christian here: if Cyrus was the "messiah," does that deny the claim of Jesus that he was the fulfillment of these prophecies in Isaiah?  As I have indicated in a previous post, that's a problem for Handel's Messiah, which was an attempt to refute the deistic denial of providential prophecy.

And, of course, there is the fundamental problem with all claims of prophecy that they are stated in such vague and confused ways that they cannot be verified, or if some seem to be verified, they are mixed up with others that are falsified.

Consider, for example, this claim by Strang: "As far back as 2007, the late Kim Clement had prophesized, 'Trump shall become a trumpet. . . . I  will raise up the Trump to become a trumpet, and Bill Gates to open up the gate of a financial stream for the church.' The first has come true, but we'll have to wait and see about the second part" (69).

The first prophecy is ridiculously vague: "Trump shall become a trumpet"?  The second prophecy that Bill Gates will give his money to the church is false.

If you go to Kim Clement's Elijah's List for April 14, 2007, which is Strang's source, you will see that Clement issued hundreds of prophecies every year, most of them in vague language, and most of them have not been plausibly fulfilled.  Here is the passage from which Strang quoted an excerpt:


"I am God and you have called to Me, and many from this Nation has said, 'Enough--enough of religion, and enough of dead speech.'  The Spirit of God said, 'This is a moment of resurrection.'  For the Spirit of God says, 'Honor Me with your praise and acceptance of this that  I say to you.  This that shall take place shall be the most unusual thing, a transfiguration, a going into the marketplace if you wish, and into the news media.  Where Time magazine will have no choice but to say what I want them to say; Newsweek what I want to say; and The View, what I want to say.'"

"'Trump shall become a trumpet,' says  the Lord!  'I will raise up Trump to become a trumpet, and Bill Gates to open up the gate of a financial realm for the Church,' says the Spirit of the Living God!'"

It's been 11 years now since the Spirit of God prophesized that Time, Newsweek, and ABC's The View would become outlets for God's message.  How long should we wait for the fulfillment of this  prophecy?  Strang is carefully silent about this and many other dubious prophecies from Clement.

Many of us find it hard to take this stuff seriously.  But many evangelical Christians do take it seriously.  For example, Strang reports that during the 2016 election, Cindy Jacobs, a Charismatic prophet, mobilized tens of thousands of people to "prayer walk" through the seven critical states that helped to elect Trump (20-21).  These "prayer warriors" walked around courthouses and centers of towns praying for God's intervention in the election.  We cannot ignore the fact that many of the millions of evangelical Christians who voted for Trump could have done so with the belief that he was God's chosen one; and if so, that would mean that this belief in divine intervention could have been the deciding factor in giving the presidential election to Trump.

As an alternative to the view of God as a providential interventionist in the world, which creates these problems, we might consider returning to the deism of the American founders, whose deity was not the God of the Bible but Nature's God.  That's the topic for my next post.
Posted by Larry Arnhart at Tuesday, June 05, 2018