The Oldest Human Fossil Out of Africa? Does the Evidence Matter? 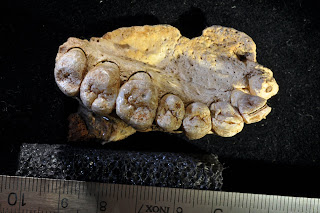 Although we generally assume that scientific reasoning depends ultimately on empirical evidence, it is not always clear that scientific debates over human evolution can be settled by looking at the evidence.  This allows the critics of evolution--such as special creationists and intelligent design proponents--to argue that evolutionary theory is not a real science based on conclusive evidence.  Nevertheless, I have argued, even if the evidence for human evolution is not incontestably conclusive, evidence does matter; and there is enough evidence to reasonably support the Darwinian account of human evolution from ancestral species.

By contrast, the special creationists and intelligent design proponents have never presented any evidence that would show exactly where, when, and how the Creator or the Intelligent Designer miraculously created the human species.  Indeed, as I have indicated in some previous posts (here and here), some of the special creationists (such as Ken Ham and Todd Wood) and some of the intelligent design proponents (such as Michael Behe) have been forced to accept the natural evolution of the human species from ancestral species.  The alternative strategy (as I indicated here) of the Discovery Institute people like Stephen Meyer is to employ evasive dishonesty and sophistry to hide the lack of evidence for their position.

Part of the evidence for human evolution is the fossil record.  For Charles Darwin, there was no human fossil record, except for a few Neanderthal fossils.  Since the African apes appeared to be the existing animals most similar to human beings, Darwin inferred that the first human ancestors must have evolved in Africa and then migrated out of Africa to the rest of the world.  Darwin's "out of Africa" theory is now generally accepted among evolutionary scientists.  But what's the fossil evidence for this?

Now, this week, we have a report in Science of the discovery of the oldest modern human fossil--a jawbone--found outside of Africa in a cave in Israel, dated at around 190,000 years old.  This is the best fossil evidence for an early human migration out of Africa.

But as you can see in the picture above, this fossil is only a fragment--a partial upper jaw, which includes some of the bone around the tooth sockets, part of the cheekbone, the roof of the mouth, the bottom of the nasal cavity, and the complete upper left dentition.  Scientists comparing this with Neanderthal fossils concluded that this really was morphologically a modern fossil and not a Neanderthal.  Other scientists used various dating techniques for dating the jawbone and the tools around it in the cave.  There was also evidence, including bedding, to indicate that people had used the cave as a base camp from which they hunted animals and then returned to eat their game.

There is a lot of uncertainty here about this evidence.  We might question the dating methods.  We might also point out that if this changes the current view of the dating of the human migration out of Africa, that shows how contingent the scientific reasoning on this is, because it all depends on the accidents of what fossils happen to turn up.  Another fossil could be found tomorrow that forces a change in the thinking.

Nevertheless, the broad pattern in the evidence--human origins from human-like primates in Africa and then migration out of Africa to the rest of the Earth--is exactly what Darwin predicted.  So the fossil evidence really does matter.

My question is unrelated to this particular post, since it's about Sam Harris and Jordan Peterson, but your Harris posts are quite old and I don't know if you'd answer those.

What do you think of the first debate between Peterson and Harris in deadlocked positions on the question of "What is truth?" I've read and heard a lot of commentary on this debate, and I was wondering what your take might be.