Motherhood in America: The Natural Desire for Parental Care in a Liberal Regime 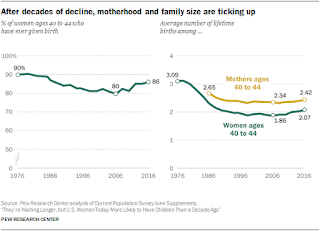 "After decades of decline, motherhood and family size are ticking up."  That's the conclusion in a new report from the Pew Research Center.  As is shown in the chart above, the percentage of American women ages 40 to 44 who are mothers has risen to 86% in 2016 from a low of 80% in 2006, and thus moving close to the high of 90% reached in 1976.

Some of my critics have denied this by arguing that in modern liberal societies, the pursuit of high socioeconomic status has diverted people from parenthood, as indicated by the fact that people in higher social classes in liberal societies have such low levels of fertility that they cannot even replace themselves.  Some of my critics say that this "demographic transition" shows the failure of a Darwinian explanation of human behavior, because it shows that the most successful people in a liberal society are not acting for their reproductive fitness.  Some of my alt-right critics say that this shows the need for restricting immigration to the U.S. from non-white countries in order to protect the genetic interests of white America.  Foreign-born black and Hispanic women have higher birth rates than U.S.-born white women.  The alt-right critics argue that ethnic nationalism has greater genetic fitness than classical liberalism, which should be seen as the deepest intellectual argument for Trumpism.  I have answered these critics in some previous posts (here and here).

My claims about the 20 natural desires of evolved human nature are empirically falsifiable, in that my claims would be refuted by evidence that most human beings are not in fact motivated by these desires.  So if most human beings--let's say 80% or more--did not show any desire for children, that would deny my argument for parental care as a natural human desire.  On the contrary, however, what we see--as in this Pew report--is that most women (80% to 90%) will become mothers before they reach the end of their reproductive years.

We also see, however, that this natural desire for children has to be balanced off against other desires, and it is highly variable across individuals and in response to variable economic and social conditions.  Some women by their individual natural temperament have little or no desire for children.  And those women who do desire children have to decide when to produce them, how many to produce, and how much to invest in each child.

In a liberal society like the United States, women have many educational and economic opportunities outside the home; and so they have to decide how to combine their investments in education and professional careers with their investments in children.  And in a society where social success depends a lot on educational achievement, women will want to invest in the education of their children.  It is understandable, therefore, that American women with higher levels of education and professional success tend to have fewer children and to have them later in their lives.

One of the remarkable findings in the Pew report is that the biggest increases in motherhood in America since the 1990s is among women with higher education.  Among women with a Bachelor's degree, the percentage of those in their early 40s who are mothers has increased from 83% in 1994 to 89% in 2014.  Even more amazing is the increase in motherhood for that small group of women in their early 40s with a Ph.D. or a professional degree (such as a medical or law degree): 80% of them today are mothers, as compared with 65% in 1994.

Isn't this evidence for the strength of the natural desire for parental care, and for how that natural desire is satisfied in a liberal social order?
Posted by Larry Arnhart at Monday, January 22, 2018