The Fourth Edition of "Political Questions" is Now Available 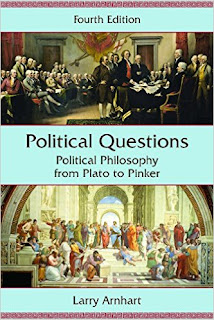 The fourth edition of Political Questions: Political Philosophy from Plato to Pinker (609 pages, $51.95) is now available.  It can be ordered from Amazon or directly from Waveland Press.

The thirteen chapters from the third edition have been extensively revised, including new sections on Hobbes's Behemoth and on Locke's Letter Concerning Toleration.

I have also added three totally new chapters on Adam Smith (The Theory of Moral Sentiments and The Wealth of Nations), Leo Strauss (Persecution and the Art of Writing and Natural Right and History), and Steven Pinker (The Better Angels of Our Nature: Why Violence Has Declined).

If you have followed this blog over the years, you will see material from many of my posts in this new edition.

This book is unique in the way it combines four major features: a reliance on disputed questions, an emphasis on primary texts, references to issues in American political history, and a multidisciplinary approach to political philosophy.

In my surveys of disputed political questions, I bring up pertinent ideas and research from anthropology, biology, economics, history, literature, psychology, and theology.  Thus, students and scholars can see how the study of political philosophy is connected to the study of many intellectual disciplines.  In doing this, I suggest that the history of political philosophy is best studied as part of a multidisciplinary liberal education that aims for a comprehensive science of nature and of human beings as part of nature.

My copy just arrived. Beautiful edition, a bargain at twice the price. Naturally, I'll read the new chapters first, but I look forward to the tour from beginning to end.

Once again, this work is very effective in getting the reader to see the questions as the authors saw them. Sounds simple, but it can be the hardest thing of all. A fourth edition shows there is a continuing demand for this work, and that's a very good sign.