Did the Cultural Evolution of Big Gods Make Us Moral? 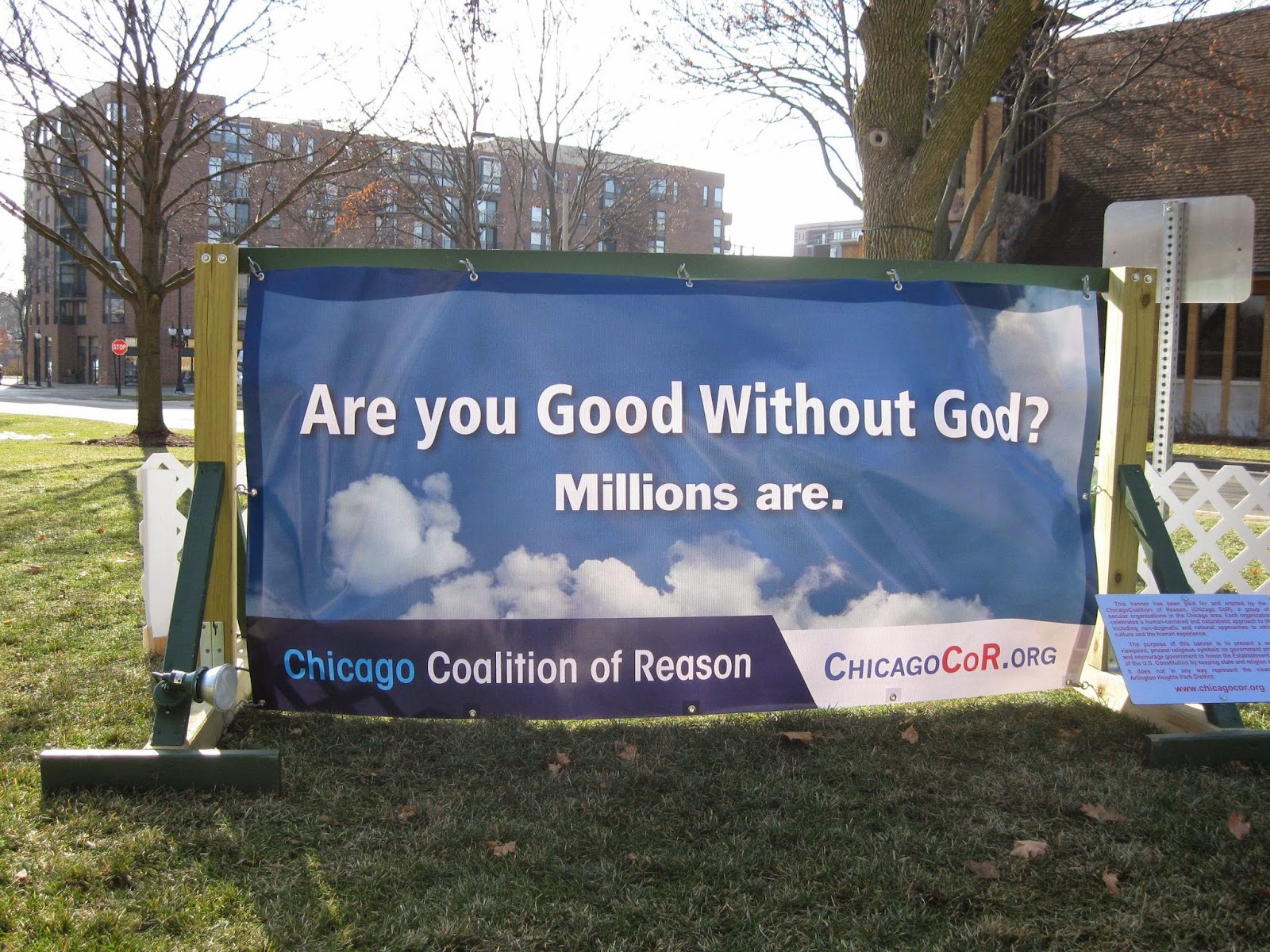 This sign has been set up in a public park in Arlington Heights, Illinois, near a Christmas nativity scene.  This morning, the Chicago Tribune is reporting that the sign has been vandalized, and the Chicago Coalition of Reason is offering a reward of $2,000 for anyone who can identify the perpetrators.  Apparently, some religious believers are angered by the claim of atheists that it is possible to be "good without God."

Indeed, throughout the history of moral and political philosophy, there has been a general agreement that the moral order of society requires religious belief in the existence of a God who enforces a moral law by rewarding the good and punishing the bad.  Even those philosophers like John Locke who have argued for religious toleration have been unwilling to tolerate atheists.  In his Letter Concerning Toleration, Locke declared: "Those are not at all to be tolerated who deny the being of a God.  Promises, covenants, and oaths, which are the bonds of human society, can have no hold upon an atheist.  The taking away of God, though but even in thought, dissolves all."

Beginning with Charles Darwin, this has been a controversial topic for evolutionary science.  Many religious believers have argued that the human knowledge of the moral law comes from human beings having been miraculously created by God in His image, and that any atheistic denial of this must subvert our morality.  For Darwin, the evolutionary history of religious belief and morality was complicated.  The anthropological evidence--as surveyed by John Lubbock and others--suggested to Darwin that our earliest human ancestors in foraging societies had no belief in any omnipotent, moral God.  Darwin thought that human mental faculties were inclined to an anthropomorphic animism, so that there was a universal tendency for human beings to project their own mental experience onto the world and to imagine unseen spiritual agencies around them.  In the earliest stage of human evolution, "anything which manifests power or movement is thought to be endowed with some form of life, and with mental faculties analogous to our own" (Descent of Man, Penguin ed., 117).  But these spirits were not omnipotent and moral deities concerned with monitoring human life.

Only very recently in human evolutionary history, Darwin observed, have human beings come to believe in an all-seeing and moral God, and this has contributed to the advance of morality.  This was a product of cultural evolution rather than biological evolution.  This cultural evolution was driven by group warfare in which groups that were cohesive because of their shared religious belief in moralistic Gods would tend to prevail over groups that lacked such religious beliefs.  And now this belief in morality as rooted in reverence or fear of God is "most important, although not necessary."  Now it is possible for people to live by their own moral judgment.  "Man prompted by his conscience, will through long habit acquire such perfect self-command, that his desires and passions will at last yield instantly and without a struggle to his social sympathies and instincts, including his feeling for the judgment of his fellows" (Descent of Man, 138-40, 682; Autobiography, Norton ed., 94-95).

In this way, according to Darwin, the evolutionary history of morality and religion has passed through three stages.  First, in the earliest and longest stage, human hunter-gatherers organized their social lives in small primitive bands through social instincts such as kinship and reciprocity, without any need for a religiously grounded morality.  Then, as human beings formed large, civilized societies, they formulated through cultural evolution religious traditions of believing in omnipotent and providential Gods who enforced a moral law for human beings.  Now, it is possible for many human beings to live by the inner monitor of their consciences without the necessity for believing in a God who rewards the good and punishes the bad.

Over the past 40 years, the growing research in the evolutionary psychology of morality and religion has largely confirmed Darwin's account.  A good survey of this research by Ara Norenzayan and his colleagues will be published in Behavioral and Brain Sciences.

They develop a cultural evolutionary theory of prosocial religions to resolve two interrelated puzzles of human evolution.  The first puzzle is the appearance over the past 12,000 years of large agrarian communities of anonymous strangers cooperating with one another.  Our Paleolithic human ancestors lived in small foraging bands comparable to other primates, in which people could cooperate based on genetically innate propensities to face-to-face relationships of kinship and reciprocity.  Those social instincts cannot explain the large societies that most of us live in today, which must be explained as products of cultural evolution.

The second puzzle is the appearance of prosocial religions with Big Gods or High Gods, Gods who are more powerful, more knowing, and more moralizing than the supernatural spirits of prehistoric religion.  Now the majority of human beings around the world are believers in one of the global prosocial religions--Hinduism, Buddhism, Judaism, Christianity, and Islam.

Various kinds of archaeological, ethnographic, historical, and experimental evidence support this theory.  The archaeological and ethnographic evidence indicate that hunter-gatherers in small foraging bands have some religious beliefs in animistic spirits that have limited powers and little moral interest in human beings.

It was only with the development of agriculture and the establishment of large agrarian societies that we see evidence of priestly religions based on beliefs in powerful, moralistic Gods that sanctify the authority of the social order.  The historical evidence from ancient Mesopotamia to the present suggests that social cooperation was enforced through belief in Gods that punished the bad and rewarded the good.  Beginning with Plato, philosophers have assumed that moral order is impossible without belief in moralistic Gods (as in Plato's Laws, Book 10).  And in religious texts like the Bible, we can see the evolution of God from a morally dubious trickster to a universal moral lawgiver.

There is also experimental evidence that believing in one of the prosocial religions promotes cooperation and fairness.  People around the world playing the Ultimatum Game, the Dictator Game, and the Public Goods Game are more likely to show a sense of fairness if they are religious believers.

And yet, as Norenzayan and his colleagues indicate, there is a dark side to this cultural evolution of moralistic religions.  As a product of group selection, these religions show parochial altruism:  believers are cooperative with their co-religionists, but they can be vicious in their treatment of those outside their religious group.

Religious violence and intolerance have provoked attempts in liberal political thought to overcome the factional conflict stirred by religious belief by promoting religious liberty and tolerance in a free marketplace of religious belief (as proposed, for example, by Adam Smith in The Wealth of Nations).  But as indicated by Locke, some liberal proponents of toleration have worried that moral order might be impossible without religious belief.

If Darwin is right, the evolution of conscience or of what Smith called the "impartial spectator" can provide a human substitute for religious morality.  Norenzayan and his colleagues agree.  They argue that the spread of secular institutions since the Industrial Revolution--including economic, political, and legal norms for enforcing cooperative behavior--has begun to secure social order without the need for religious belief.  They cite the example of those countries in Northern Europe today that are well-ordered although most people have no deep religious beliefs.

The research of Joseph Henrich and his colleagues that showed that religious belief increased fairness in playing the Ultimatum Game also showed increased fairness in societies with market integration.  People who engaged in a lot of market exchanges tended to develop expectations of fair cooperation and a tendency to punish cheaters.  This might confirm Smith's suggestion that in a modern commercial society, the desire for a mutual sympathy of sentiments in a free society can generate morality as a spontaneous order without any need for divine intelligent design.

If so, then perhaps we can be good without God.

Phil Zuckerman’s sociological research has a lot to say about this issue, and he just published a new book, entitled Living the Secular Life.

Dr. Arnhart, have you ever read Ken Wilbur’s theories on national development? He offers that up in his essay “The Integral Vision of the Millenium,” which you might find interesting alongside Darwin’s evolutionary account. It can be found here: http://www.fudomouth.net/thinktank/now_integralvision.htm

Religion has also always been a refuge for scoundrels who cloak themselves in religion to get their victims to let down their guard. It might have been more tolerable when it was limited to a few bad people, but seems to have become monstrously widespread.

Religion and civilization have always coincided. It is dangerously naive to think you can have one without the other. Communism died after 50 years because it was obvious that it was disadvantageous, but religion has survived for millenia. It is obviously doing something beneficial, and I doubt it is a coincidence that religion and civilization started at the same time and have coexisted ever since.