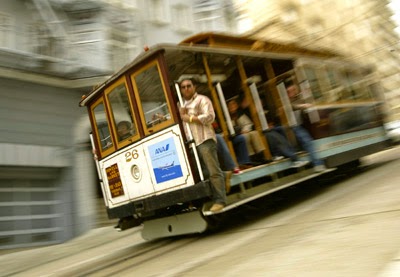 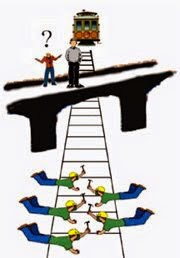 
You are walking along the tracks of a trolley in San Francisco.  You notice that there is a runaway trolley that will kill five people who have become somehow bound to the tracks.  You also notice that there is a switch that will turn the trolley onto a side track, a spur, and thus save the lives of the five people.  Unfortunately, however, there is one person bound to the side track, and so if you throw the switch, he will be killed.  Should you throw the switch?

On another day, you are walking on a footbridge over the tracks.  You see another runaway trolley speeding toward five people bound to the track.  This time, there is no possibility of switching the trolley to a side track.  You could jump onto the track to try to stop it, but you are such a small person that you probably could not stop the trolley.  You notice that there's a big fat man on the bridge who is big enough to stop the train if you push him onto the track.  Should you push the fat man?

These stories might seem too cartoonish to be taken seriously as moral dilemmas.  But in recent decades, ever since they were first proposed by philosophers Philippa Foot and Judith Jarvis Thomson, they have become some of the most debated thought experiments among moral philosophers.  They have also been introduced into scientific experimentation conducted by philosophers, psychologists, and neuroscientists to test whether our moral intuitions about the trolley problem manifest an innate and universal moral sense shaped by human evolution and written into the neural circuitry of the brain.  This shows how a fundamental question in moral and political philosophy can be translated into experimentally testable propositions.  This trolleyology (as it has been called) has become a crucial part of the recent movement towards "experimental philosophy."

An engaging survey of this research has recently been published--Would You Kill the Fat Man? by David Edmonds (Princeton University Press, 2014).  The book elaborates an article by Edmonds that is available online.  A book by John Mikhail--Elements of Moral Cognition: Rawls' Linguistic Analogy and the Cognitive Science of Moral and Legal Judgment (Cambridge University Press, 2011)--shows how this research might confirm Rawls's account of moral knowledge as an innate moral sense analogous to what Noam Chomsky in linguistics has identified as the Universal Grammar that is innate in the minds of all normal human beings and allows them to learn any language.  This research has provoked a lot of criticism.  One of the most interesting lines of criticism comes from the Kantian utilitarian Peter Singer--in "Ethics and Intuitions," The Journal of Ethics 9 (2005): 331-52, which is available online.

Of the hundreds of thousands of people all around the world who have participated in formal trolley problem surveys, most people (up to 90% in some studies) would divert the trolley in the Spur case, but they would not push the fat man in the Footbridge case.  What is most striking about this is that most people react differently to the two cases although pulling the switch and pushing the fat man have identical consequences--one person dies to save five.

Joshua Greene and his colleagues have used brain scanning (functional magnetic resonance imaging) to study the brains of people as they think about trolley problems.  He found that there was a kind of neural wrestling between the calculating and emotional parts of the brain.  Responding to the Spur problem, most people decide to pull the switch, and the more calculating areas of the brain are active (the dorsolateral prefrontal cortex and the inferior parietal lobe), suggesting that they are calculating costs and benefits.  But in response to the Footbridge problem, most people decide that they cannot push the fat man, and the more emotional areas of the brain are active (amygdala, posterior cingulate cortex, and medial prefrontal cortex), suggesting that the idea of pushing the fat man is triggering emotional alarms.  For centuries, moral philosophers have argued about the relationship between moral reason and moral emotion in moral judgments.  Now, it seems, we can see that complex interaction between reason and emotion in the human brain.

For a Kantian utilitarian like Singer, the relevant moral principle in the trolley problem--that five deaths are worse than one death--is the same in both cases, and therefore Singer would pull the switch and push the fat man.  For Singer, the 10% of the people who would push the fat man are rightly following pure moral reason, while the other 90% are allowing their emotions to override their reason, because from the viewpoint of pure reason, there is no morally relevant difference between the two cases.

Singer concedes that the reluctance to push the fat man probably shows a naturally evolved emotional predisposition against intentionally and directly killing an innocent person, even when such killing will save more lives.  But for Singer that only shows that moral reason should overcome the irrationality of our evolved psychology.  The fact that most people would not push the fat man is irrelevant to the normative question of what they ought to do.  Unlike the empirical sciences (such as the evolutionary science and neuroscience of human nature), normative moral and political philosophy belongs to a realm of pure reason that transcends the natural world of observable experience.  For these reasons, Singer rejects Rawls's claim that moral theory must be rooted in a moral psychology of moral intuitions.

Rawls argues that this moral grammar supports "justice as fairness" as grounded on the two principles of justice, including the difference principle.  Mikhail, however, is completely silent about these Rawlsian principles; and in place of these principles, Mikhail substitutes the legal norms of homicide and battery as manifested in the trolley problems and in legal tradition.

The trolley problems involve both homicide (the killing of one person to save five people) and battery (the pushing of the fat man).  Mikhail claims that the general principle that accounts for how most people solve the trolley problems is the principle of double effect as stated by Thomas Aquinas.  While the killing of innocent people is generally prohibited, killing can be permissible if the deaths are foreseen but not directly intended and if there are good effects from this that outweigh the bad effects.  So, for example, if I kill in self-defense or in defense of the lives of others, and if the death of the victim is only a side-effect of my actions rather than a directly intended end, then the killing might be permissible.  Mikhail generalizes this principle to cover homicide and battery: "the principle holds that an otherwise prohibited action, such as battery or homicide, which has both good and bad effects may be permissible if the prohibited act itself is not directly intended, the good but not the bad effects are directly intended, the good effects outweigh the bad effects, and no morally preferable alternative is available" (149).  To apply this principle, we need to distinguish means, ends, and side-effects.

This allows Mikhail to explain the morally relevant distinction between the Spur case and the Footbridge case.  In the Spur case, the bystander creates a bad effect (the killing of the man on the spur) only as a side effect.  We know this, because we assume that if the man on the spur were able to free himself before he was hit by train, the bystander would prefer this.  The bystander directly intends to save the five people, but he does not directly intend to kill the man on the spur, although this is a foreseeable consequence.  The bystander must also assume that the bad effect of killing the man is outweighed by saving the five, and that there is no morally preferable alternative (such as throwing some object on the tracks to stop the trolley).

By contrast, Mikhail notes, if we suspected that the bystander was looking for a chance to murder the man on the spur, and so he used the runaway train as an excuse for switching the train towards his intended victim, then this might be considered intentional homicide.

The Footbridge case differs from the Spur case in one respect.  The bystander's pushing of the fat man is a directly intended battery and not just a foreseeable side effect, which most people judge to be forbidden.

But what should we say to Singer's objection to all this, which Mikhail calls "the objection from insufficient normativity" (188)?  The descriptive adequacy of Mikhail's account of how people respond to trolley problems says nothing, Singer complains, about the normative adequacy of our principles in deciding how people ought to respond to trolley problems.  Justifying moral principles is not the same as describing moral intuitions.  Normative moral theory is looking for universal and eternal principles of what is morally right or wrong that are true independently of what human individuals or human cultures believe to be right or wrong.  When Rawls appeals to the moral intuitions that are common among people who live in liberal democratic societies, Singer observes, he becomes a cultural relativist, so that liberal principles of justice are regarded as true only because they happen to be accepted in liberal cultures.  When Rawls suggests that there might be a universal moral sense that is expressed in liberal moral intuitions, and when Mikhail provides empirical evidence for this, this might escape the charge of cultural relativism; but this universal moral sense as imprinted in human psychology by human evolution is still only subjective, lacking in any objective truth, because it's a psychological projection of the evolved human mind rather than an objective truth about the universe.

Mikhail's response to Singer's objection is to admit that, yes, the moral grammar of human nature as a product of evolutionary history imprinted on the human brain is a projection of human psychology that has no mind-independent reality outside of the human mind.  If human beings did not exist as the kind of moral animals that they are, then their human morality would not exist.  Thus, there is no sharp distinction between the normative and the empirical, because normative morality is a projection of our empirical psychology.

What alternative is there?  Singer says that we need a cosmic morality--eternal and universal principles of right and wrong that are somehow woven into the frame of the universe and discoverable by human reason just as we discover principles of mathematics as somehow inherent in the structure of the cosmos.  But Singer never gives a clear explanation or proof of how this could be the case.  Notice that in his essay on "Ethics and Intuitions," he says that we need to prove the objective truth of morality as based on "pure reason" without intuition or emotion, but he indicates that no philosopher has ever successfully done this, and he will not do it himself.

In fact, as I have indicated in a previous post, Singer now admits that after many years of trying to prove that morality can be objectively true and rationally based, without any necessary foundation in evolved human psychology, he has failed, and so he doubts his previous arguments for a Kantian utilitarianism.  But, amazingly, after making this admission, he reaffirms "the existence of objective moral truths."  Although his Platonic longing for an eternal Idea of the Good has been frustrated, he still cannot give it up.

I say--better to be a satisfied Darwinian than a dissatisfied Platonist.

Some of these points are elaborated in other posts here, here, and here.
Posted by Larry Arnhart at Sunday, August 24, 2014