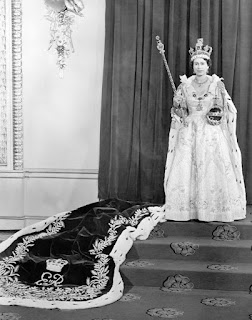 THE DECLINE OF MONARCHY

If King Charles III of Great Britain were to declare that he was going to reclaim all of the monarchic power once held by Charles I and Charles II in the seventeenth century, this would undoubtedly be rejected, and even ridiculed, by the British Parliament and the British people.  Why?

Here's the answer from Gerring et al.: "We have argued that monarchy solved the primordial coordination problem of politics in the premodern era.  Where societies are disconnected, a focal point is needed and monarchy was, for millennia, a readily available heuristic for establishing legitimate government.  In the modern era, as societies became more interconnected, monarchy's advantage disappeared.  With societies now highly mobilized and interconnected, monarchy's inability to integrate the masses into politics became a defect rather than an asset" (17).  According to Gerring et al., the primary reason why societies today are so "highly mobilized and interconnected" is the development of mass communications--the printing press, newspapers, national postal systems, the telegraph, radio, television, and the internet.  In particular, they show how the diffusion of radios beginning in the 1920s is associated with the decline of monarchy in the modern era (23-26).

Does it make any sense to say that "monarchy's inability to integrate the masses into politics became a defect rather than an asset"?  Why can't monarchy use modern mass communication to glorify monarchy among the masses?

Monarchy depends on a perception of society as a hierarchy.  Patricia Crone observes: "Pre-industrial society was commonly envisaged as a hierarchy (chain of command) in which everyone knew his proper place, enjoyed the appropriate rights and duties and obeyed his superiors, receiving obedience from his inferiors in his turn: all in the last resort obeyed the monarch, through whom human society was slotted in with the divine" (115).  This hierarchy was a very narrow pyramid--with a ruling elite at the top that was about 1-2% of the population and peasants at the bottom who were about 80-90% of the population.  What is it about modern culture that has undermined this premodern perception of society as a rigid hierarchy?

One possible answer to all of these questions is suggested by Crone's book, although Crone does not explicitly state it: modernity has dissolved the monarchic culture of hierarchy by promoting the evolutionary symbolic niche construction of the bourgeois culture of equal liberty.

THE EVOLUTIONARY BIOLOGY OF SYMBOLIC CULTURE

According to Crone, human beings are unique in their capacity and need for culture: "Human beings are distinguished from other animals by their inability to survive without culture, that is information which is not transmitted genetically and which thus has to be learnt afresh by every new generation.  (For example, the capacity to reproduce is genetically transmitted, but kinship systems, courtship etiquette and marriage rules are elements of culture; the capacity to utter noises is genetically transmitted, but languages have to be learnt; so do social and political institutions, agriculture, pottery-making, counting, writing and so on.)" (94).

The social organization of other animals is built into their genes, and thus every species of social animal has its own genetically determined social structure that does not change.  "The human animal is of course genetically programmed too.  However, its programme for social organization is deficient (and to some extent even counter-productive).  The programme does little but instruct its bearer to learn, or in other words to acquire culture with which to supplement (and in some cases even to suppress) such specific instructions as it retains.  Without doing so, the species simply could not survive; doing so, it can survive almost anywhere on earth and even, for limited periods, outside it.  Culture is thus the species-specific environment of Homo sapiens.  Living in accordance with nature is an attractive idea, but in the human case it actually means living with culture" (94-95).

Crone explains human culture as a construct of the human mind that can be imagined but not directly observed.  Through cultural constructions, human beings create world views--that is, theoretical constructions of the world in the mind.  World views can be prescriptive, in that they provide a valuation of the world--telling us what to do and not do.  These prescriptive world views can be religious, ideological, philosophical, or moral.  Religious world views differ from the others in that religion explains the world with reference to supernatural beings rather than abstract principles or impersonal laws.  Religions have been more popular in history than the other atheist or non-theist world views, because "supernatural beings endowed with human feelings are easier to understand, love and obey than abstract concepts."

In contrast to these prescriptive world views, Crone argues, modern science provides a purely descriptive world view--a theoretical construction of the world that explains the world without telling us what to do (142-43).  She does not answer the obvious objection to this claim--that modern science must be prescriptive (in other words, ethical) because the practical commitment to the life of science implies that this is a good life.  The success of modern science and its promotion of modern mass communications would have been impossible without the modern ethical commitment to science as a human good.

Crone identifies two functions of culture that are best served by religious world views: the drawing of socio-political maps and providing meaning.  The first is important because since human beings are not genetically programmed for any specific kind of socio-political order, they need to culturally construct a conception of good social and political order as an invention of the human imagination.  Crone offers a simple, and comical, illustration:

"Nothing in my genetic equipment tells me that I should milk cows or be forbidden to do so; you may force me to milk them, but if that is all there is to it, I may beat you up or run away the moment you are busy drinking; and though you may be in league with others today, you may fall out with them tomorrow: common interests are highly unstable, as anyone familiar with the phenomenon of intrigue should know.  By contrast, if you devise a religion which says that the gods want my kind to milk and your kind to stick together in enjoyment of authority, on the grounds that my kind descend from a cow whereas you and yours descend from a god, then you may hope to create a society which remains stable not only during our lifetime, but also, and crucially, when social roles have to be transferred to the next generation: the religion would both justify and solidify the social order" (147).

The second function of culture--providing meaning--is served when a religious world view justifies the socio-political order by showing how it fits into God's plan for the world and for the human beings who obey His laws.  As Crone indicates, religion justified monarchy in pre-industrial societies by identifying the king as the link between the divine and the human worlds.  This justified the premodern hierarchical ranking from high to low: from God to King to peasants. 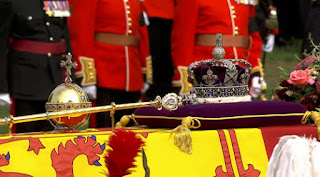 The Crown, Orb, and Sceptre of the Monarch on Queen Elizabeth's Coffin

At the funeral for Queen Elizabeth II, we saw the symbols of this link to the divine in the monarchy.  These are the same symbols displayed at Elizabeth's coronation in 1953.  The Sceptre and Orb were first created for Charles II's coronation in 1661, which was the restoration of the monarchy that had been overthrown in 1649 with the beheading of Charles I and later the establishment of a Republic.  The Sceptre represents the Crown's power and governance.  The Orb is a golden jeweled globe with a gem-encrusted cross symbolizing that the monarch's power is from God.  At the coronation of King Charles II next year, we will see him receiving this same Crown, Orb, and Sceptre from the Archbishop of Canterbury.  For Elizabeth's coronation in 1953, William Walton composed a march for orchestra entitled "Orb and Sceptre."