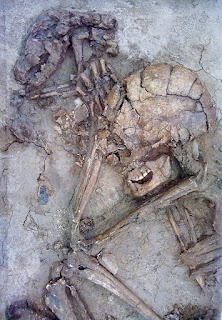 These are skeletons of a human and a dog (upper left) that were found buried underneath a 12,000-year-old home in Israel.

There are many graves like this, with prehistoric dogs buried alongside their ancient hunter-gatherer owners.  Often the dog is under a person's arm.  This shows the deep evolutionary history of the friendship between humans and dogs.

A Watercolor Tracing by Henri Breuil from a Cave Painting of a Wolf-Like Canid, in France, Dated 19,000 Years Ago

Oxytocin (OT) is a nine-amino acid neuropeptide and peptide hormone that evolved among mammals to support the birth of offspring, maternal bonding and care of offspring, and sometimes monogamous mating of parents who jointly care for their offspring.  In humans and some other animals, OT seems to be associated generally with emotional bonding, empathy, and trust.  But the interaction of the OT system with other neurophysiological systems and with environmental circumstances is so complicated that it is hard to study, and there is no agreement among scientists as to exactly how and where it works in the brain.

In Darwinian Natural Right, I identified OT as one of the evolved proximate causes of the natural desire for parental care.  I have also written a series of posts (here, here, here, and here) suggesting that OT might support the morals and markets of Lockean and Smithian liberalism.  Now I am beginning to think that this could be explained as part of a process of convergent evolution through human self-domestication.  One piece of evidence for this is how oxytocin promotes the bonding of humans and dogs, arising as a by-product of the domestication of wolves into dogs.

Those of us who are dog owners know that looking into our dog's eyes is one of the simple joys of life that creates a feeling of bonding similar to what happens when parents look into the eyes of their infant.  We know that this is a product of domestication, because staring into the eyes of a wolf will provoke the wolf into a snarling reaction to your threatening gaze.

Some experiments have shown that this human-dog bonding through mutual gaze depends on oxytocin.  Gazing behavior from dogs, but not wolves, increases oxytocin in their owners, which increases the owner's feeling of affiliation and increases oxytocin in the dogs, in a reinforcing feedback loop.  In this way, dogs have hijacked the human bonding pathway (MacLean and Hare 2015; Nagasawa et al. 2015).

This indicates how the domestication of dogs selected for friendliness and against aggression, which created neurophysiological changes that make the social bonding of dogs and humans pleasurable.  I am wondering whether something similar could have happened in the self-domestication of humans to support an expanding circle of human social cooperation.

Even if this is so, however, I also wonder whether there must be a limit to this expanding circle, so that one's intense attachment to those within one's social group is often combined with intense animosity to those outside one's group.

I will be looking deeper into this human self-domestication hypothesis and its implications for the evolution of the liberal social order.