Does the "Dragon Man" Skull Fit the Human Self-Domestication Hypothesis? 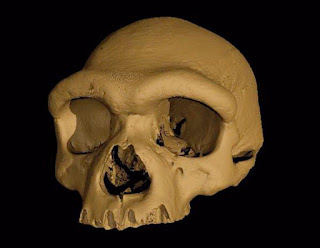 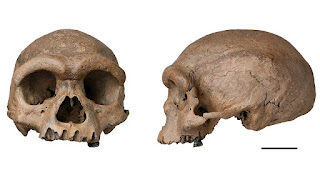 The scientists who announced on Friday the discovery of this fossil in China have identified it as the skull of an adult male who belonged to a new human species named Homo longi.  Long means dragon in Mandarin Chinese, and the fossil was found in the Dragon River region of northeastern China.  Carl Zimmer has written about this in The New York Times (Zimmer 2021), and he has links to the three articles by the scientists announcing the discovery (Ji et al. 2021; Ni et al. 2021; Shao et al. 2021).

The fossil has been dated as being at least 140,000 years old, which means that it is one of the six Homo species that lived on the Earth at the same time as Homo sapiens, which includes Homo erectus, Homo heidelbergensis, Denisovans, Homo luzonensis, and Homo neanderthalensis.  Although they did not all meet one another, we do know that Homo sapiens had intimate contact with Neanderthals and Denisovans--so intimate that we today still have Neanderthal and Denisovan genes.

Studying this "Dragon Man" skull in comparison with all the other fossils of the ancient hominids raises two kinds of questions.  One kind of question is about deciding where this skull belongs in the evolutionary lineage of hominids.  Is it really a new species?  Or does it belong to one of the already identified species?  Some scientists are arguing that it's actually a Denisovan skull.

Another kind of question is about explaining the emergence of Homo sapiens to be the dominant--the only--Homo species on the planet.  Why did those other six hominid species go extinct?  What was so special about our human ancestors that they survived and spread across the globe, while the other hominids disappeared?  This is especially puzzling when one realizes that these other Homo species seem to have been well-adapted for life on Earth.  After all, Homo erectus lived on the planet for a long time--from about 2 million years ago to about 115,000 years ago--longer than our species has.

It is often assumed that what makes us unique in the evolution of primates is our large brains as measured by our large craniums, which indicates greater cognitive capacities.  But in fact some of the Neanderthal fossil skulls have a cranial capacity greater than ours.  The Dragon Man skull's cranial capacity is around 1,420 cubic centimeters, which puts it within the range of modern humans.  So the mere size of the human cranium does not by itself explain the human difference.

There are some differences in the fossil skulls that point to ways that Homo sapiens surpasses other Homo species.  One of the most evident differences is in the brow ridges.  Notice how far the brow ridge of Dragon Man projects from the face, much farther out than for a typical Homo sapiens skull.  A similar difference can be seen even within the evolutionary history of Homo sapiens.  The older human skulls show a more prominent brow ridge than the younger human skulls.  Men tend to have thicker, more overhanging brow ridges than women, which is caused by men having higher levels of testosterone than women during their development, particularly during puberty.  So we can say that the skulls of Homo sapiens are more "feminized" than the skulls of other Homo species like Dragon Man, just as younger human skulls are more "feminized" than older human skulls.  You can see this craniofacial feminization in these human skulls: 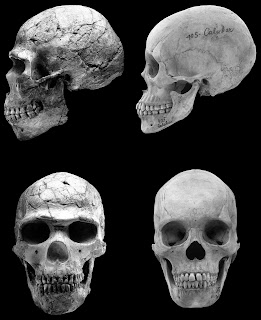 On the left, you see a 110,000 to 90,000 years-old human male in lateral (top) and frontal (bottom) views, compared to that of a recent African male (right).  The older skull on the left shows the large brow ridges and long and narrow, masculinized face characteristic of Middle Stone Age/Middle Paleolithic-associated humans, as compared to the more feminized face of recent humans.

Some evolutionary biologists--such as Brian Hare (Hare 2017; Hare and Woods 2020) and Richard Wrangham (2019)--have seen this as evidence for the Human Self-Domestication Hypothesis: just as some wild animals have evolved through domestication to become tame animals living around human beings, so have human beings domesticated themselves in that ancient human ancestors were selected for being less aggressive and more socially tolerant individuals; and thus human beings have evolved by self-domestication through what Hare has called "survival of the friendliest."  Some of the evidence for this is found in our anatomy, particularly in our faces.

Dogs were the first animals, and the only large carnivores, to be domesticated.  They were domesticated sometime before 15,000 years ago, and perhaps as long as 30,000 years ago.  They were the only animals domesticated for life with nomadic hunter-gatherers.  They were descended from wolves, particularly from individual wolves with less aggressive temperaments who could live around humans, perhaps feeding on human waste, including human feces.  Dogs have been selected for their friendliness to human beings.  But this selection for friendliness brings with it a suite of developmental, anatomical, and physiological changes, which has been called the "domestication syndrome."

In his famous experiments with silver foxes, Dmitry Belyaev showed how we can directly observe the evolutionary process by which wild animals become domesticated animals, because he selected wild foxes that showed friendliness to human beings and bred them.  Within 40 years, his breeding for friendliness had created foxes that were as loving to human beings as dogs (Dugatkin and Trut 2017).  As I have written about this in previous posts (here and here), this has suggested to some scientists the possibility that human beings have domesticated themselves in evolutionary history because their ancient ancestors were selected for friendliness just like Belyaev's foxes.

The first test of this Human Self-Domestication Hypothesis came in 2014, when Robert Cieri and his colleagues made some predictions about what would be found in the record of human fossil skulls if this hypothesis were correct.

It has become common for paleoanthropologists to explain this as a result of increasing human populations with dense social networks, so that more people interacting with one another promoted the generation, retention, and diffusion of cultural innovations.  But for this to happen, Cieri and his colleagues argued, there needed to be an increase in social tolerance, so that people in densely populated groups would cooperate with one another rather than fall into conflict.  There had to be some evolutionary selection against aggressive individuals and favoring cooperative individuals.

We should expect to find fossil evidence for this, because the neurotransmitters and hormones that mediate aggressiveness have effects on skeletal development, particularly in craniofacial growth and development.  So if there has been evolutionary selection for social tolerance--for survival of the friendliest--we can expect to see changes in skeletal morphology.

"In addition to moderating social tolerance, androgens play osteogenic roles and are important to the development of sexual dimorphism in craniofacial features . . . . Thus selection against the antisocial behavioral traits associated with high androgen reactivity would be expected to cause a reduction in average androgen levels or receptor density and result in craniofacial feminization in a population over time" (Cieri et al. 2014, 422).

The evolution of craniofacial feminization in Homo sapiens over the last 200,000 years could be seen as a skeletal by-product of an evolution for reduced aggressiveness and increased friendliness similar to what can be seen in domesticated silver foxes, domesticated dogs, and in bonobos.  Lyudmila Trut continued Belyaev's work after his death in 1985.  In 1999, she reported that the domesticated lines of silver foxes showed changes in skull shape.  The domesticated foxes had narrower skulls, with less cranial height, than the farm foxes, so that "the skulls of males became more like those of females" (Trut 1999, 167).

If human fossils show a similar evolution of craniofacial feminization, this could be evidence for human self-domestication.

I will be writing a long series of posts on this Human Self-Domestication Hypothesis.  And while this might seem to paint a rosy picture of evolved human nature as the friendliest animal, we will see that the picture has a dark side, because our friendliness to others in our group is combined with aggression towards those outside our group.  We are at once the nicest and the nastiest species.

I will also argue that this Human Self-Domestication Hypothesis supports Lockean liberalism, because what Locke identifies as the natural propensity to punish those who violate the law of nature corresponds to the self-domesticating propensity to select against aggressive individuals and to favor cooperative and socially tolerant individuals.  So I will defend a Lockean Liberal Self-Domestication Hypothesis.

Dugatkin, Lee Alan, and Lyudmila Trut. 2017. How to Tame a Fox (and Build a Dog): Visionary Scientists and a Siberian Tale of Jump-Started Evolution. Chicago: University of Chicago Press.

"Another kind of question is about explaining the emergence of Homo sapiens to be the dominant--the only--human species on the planet."

It was not lunacy for Charles Darwin to identify the human races as belonging to one human species.

Different species? Wow. I didn't know I've engaged in bestiality. Worst of all, I liked it.